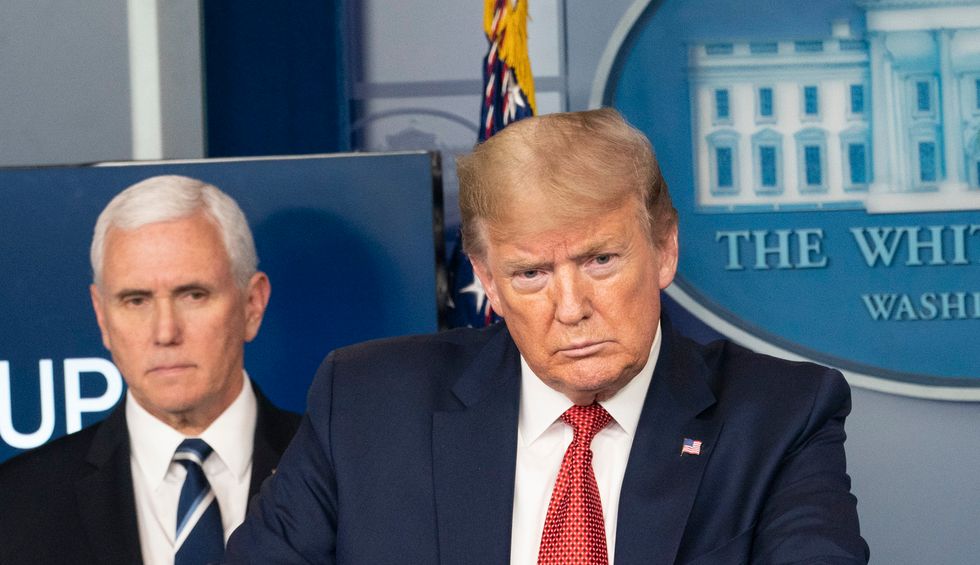 President Donald Trump on Friday went on a lengthy Twitter rampage that included calls to "liberate" Michigan, Minnesota, and Virginia, an open show of support for right-wing demonstrators who are disregarding stay-at-home orders in those states to protest coronavirus social distancing guidelines.

The tweets, fired off in rapid succession late Friday morning, drew condemnation from advocacy groups and other critics who said the president should be focusing his attention on the lagging federal response to the deadly virus outbreak, not urging people to revolt against state guidelines.

"Why is this your priority?" asked Vanita Gupta, president and CEO of the Leadership Conference on Civil and Human Rights. "Stop tweeting. People are dying."

Public Citizen, a consumer advocacy group, pointed out that the president's tweets came after the U.S. on Thursday recorded its highest one-day coronavirus death toll to date at 4,591.

Trump's tweet-storm began with an all-caps call to "LIBERATE MINNESOTA," the slogan used by right-wing demonstrators who rallied outside the home of Minnesota's Democratic Gov. Tim Walz on Friday.

"I lack words to describe how stupid and dangerous this is," Ethan Zuckerman, director of the MIT Center for Civic Media, wrote in response to Trump's tweets. "If social distancing to conquer Covid-19 becomes a political and cultural war, we're all doomed."

Vox's Aaron Rupar noted that the president's tweets "appear to have been inspired by a segment he saw on Fox News minutes earlier."

"At 11:19 [am]—two minutes before Trump's Minnesota tweet—Fox News ran a segment about small groups of right-wing protesters in Minnesota and Virginia who have been agitating for governors there to relax stay-at-home orders so they can resume normal shopping and traveling activities," Rupar wrote.

Trump's tweets came less than 24 hours after the White House released new public health guidelines urging states to lift coronavirus prevention measures at their own pace, a retreat from the president's declaration earlier this week that he has "total" authority to reopen the U.S. economy.

The president's plan, as Common Dreams reported, was vaguely worded and did not contain anything resembling the kind of nationwide testing strategy that public health experts say must be established before any attempt to resume business as usual.

"Until such a program is implemented, any plan for the widespread reopening of American businesses is fatally flawed and pure folly," Dr. Michael Carome, director of Public Citizen's Health Research Group, said in a statement Friday.

"By sending a green light to states to begin reopening businesses," Carome said, "Trump has all but guaranteed that countless Americans will continue to get infected and die, hospitals will be overwhelmed, and the economic damage will expand."