Trump appears to have fraudulently manipulated financial markets yet again 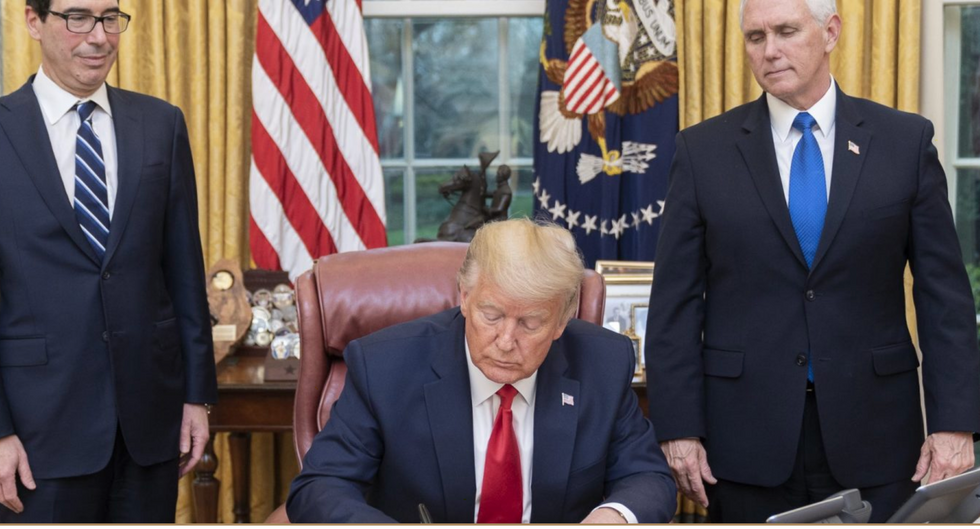 It was a busy week for the regime, as Trump and his team work tirelessly to manage the political fallout from the COVID-19 pandemic, but it seems like he made time for some fraud.

In March, global oil prices crashed as a result of a dispute between Russia and the Saudis, dragging down stock markets and making it unprofitable to extract shale oil, which accounts for almost two-thirds of crude oil production in the U.S.

At first, Trump spun this as a win, claiming that falling gas prices were “the greatest tax cut we’ve ever given.” (While a barrel of crude oil costs less than half of what it sold for at the beginning of the year, what you pay at the pump has only dropped by about 10 percent.) But on Thursday, as the Dow's mild gains from the federal government's $2 trillion relief package were dissipating, Donald Trump changed his tune, announcing that he had spoken with his "friend" Mohammed bin Salman ("MBS"), the Saudi Crown Prince who US intelligence officials say ordered the murder and mutilation of a Washington Post columnist, and that MBS had told him that he'd spoken with Russian President Vladimir Putin about a soon-to-be-announced deal cutting global oil production to buoy the market.

Let's set aside the fact that if crashing oil prices represented  “the greatest tax cut" ever, then rising prices would be a big tax hike on the middle class, which is usually not considered "Good (GREAT) news for everyone." After all, this president* is not known for his coherence, and we've always been at war with Eastasia.

The big problem is that after crude oil prices briefly spiked following Trump's tweets, it turned out that--and this may come as a shock--Trump had been lying. Russian officials flatly denied that any such call between Putin and MBS had occurred, and shortly after the Saudis released a statement calling for a meeting among oil producing countries to negotiate "a fair agreement."

If Trump made the false claim to bolster the markets, as appears to be the case, it wouldn't be the first time. Last fall, Trump claimed that he had spoken with Chinese officials by phone and bragged that a trade agreement with China was imminent. Stock markets reacted positively to the news, but the Chinese government said they had no idea what he was talking about. CNN then reported that Trump’s “aides privately conceded the phone calls Trump described didn’t happen the way he said they did. Instead, two officials said Trump was eager to project optimism that might boost markets.”

(And, as Vox reported last year, Trump’s "tweets have become increasingly consequential for some investors in recent months, specifically when it comes to interest rates and bonds. According to analysts at JPMorgan, who created and coined the “Volfefe Index” — a combination of the word “volatility” and the infamous Trump “covfefe” tweet (more on that in a bit) — Trump’s missives related to trade and monetary policy, specifically, have been pushing markets around.)

As we noted at the time, that's a felony. It's securities fraud. And while Trump won't ever be prosecuted, we have a civic duty to keep pointing out that anyone else would be for doing the exact same thing.

On January 3, Secretary of Health and Human Services Alex Azar learned of the spread of COVID-19 in China. According to the WaPo, he could not raise Trump on the phone to warn him of the looming threat until January 18, at which point "the president interjected to ask about vaping and when flavored vaping products would be back on the market.”

On February 5, Trump turned down an offer from Congress for supplemental funding for the pandemic. That same day, Azar asked the White House for $2 billion to buy respirators, and Trump pared that figure down by 75 percent. Two days later, the regime "facilitated the transportation of nearly 17.8 tons of donated medical supplies to the Chinese people, including masks, gowns, gauze, respirators, and other vital materials."

This is so important for everyone to understand. This explains why Governors say: I'm not getting the supplies I ne… https://t.co/kRtwYL78WK
— David Begnaud (@David Begnaud) 1585866724

The Washington Post has an excellent overview about how, "from the Oval Office to the CDC, political and institutional failures cascaded through the system and opportunities to mitigate the pandemic were lost."

The case fatality rate from COVID-19 ranges between 1-3 percent in most states, but is close to 5 percent in Puerto Rico, and Congressional Dems are calling out the regime for continuing to neglect this group of Americans.

How much suffering will Trump impose on Americans in pursuit of his vendetta against Obama? Quite a bit, according to Politico, which reported that Trump surprised his own staff by refusing to re-open enrollment in Obamacare amid a pandemic. "Insurers were prepared to extend coverage, HHS officials were largely on board, but [Trump] refused."

Trump said that he would oversee himself in distributing $2 trillion in relief funds allocated by Congress, and this week he did the next best thing, appointing his special assistant Brian Miller to serve as "Special Inspector General for Pandemic Recovery for the Department of Treasury." [WaPo]

He also tapped a wingnut former law clerk to Brett Kavanaugh for a lifetime appointment on the influential DC Circuit Court.

BREAKING: Trump will nominate Justin Walker to the DC Circuit. He was just confirmed to the district court in Octob… https://t.co/vMAA8UB6Mb
— Vanita Gupta (@Vanita Gupta) 1585923266

They are not letting a historic public health crisis interfere with the important project of dismantling the regulatory state.

LA Times: "The Trump administration on Tuesday weakened one of the nation’s most aggressive efforts to combat climate change, releasing new fuel efficiency standards for cars and trucks that handed a victory to the oil and gas industry."

Finally, we're all a bit stir-crazy, and it seems that Trump is getting ready for some golfing. While several of his golf resorts are closed, one of his properties in Virginia remains open, and the Secret Service signed a contract to rent $45,000 worth of golf carts in that very town. "The new contract, which the Secret Service described as an 'emergency order,' does not mention Trump or the golf club by name," according to The Washington Post, "but it closely mirrors past contracts signed by the Secret Service, for agents accompanying Trump to his golf clubs in New Jersey and Florida."