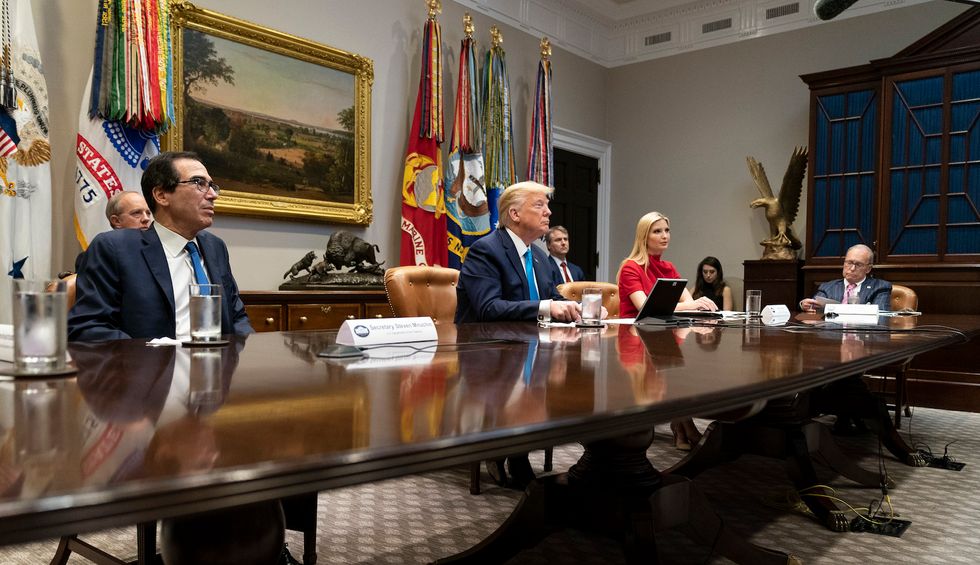 Were Trump a cabinet secretary, doctor or waitress, he’d be long ago fired for gross incompetence.
Cody Fenwick
April 13, 2020

President Donald Trump plans to launch a new task force within the government this week focused on reopening the economy following the end of coronavirus shutdowns across the country. And according to a Fox News report on the members of the new team, the group appears to be a complete joke.

Of this list, two members are the president's personal relatives who lack any reasonable justification for their positions in the White House, let alone sitting on such an important task force. Another two, Kudlow and Ross, have already thoroughly discredited themselves during the coronavirus crisis.

On Jan. 30, Ross said that the coronavirus could be good for the American economy.

“I think it will help to accelerate the return of jobs to North America, some to [the] U.S., probably some to Mexico as well,” Ross said on Fox Business.

We have now lost more jobs in a few weeks than at any other time recorded in U.S. history.

And on Feb. 25, Kudlow said on CNBC that the virus had been contained — a claim that was clearly wrong then, and which looks even more misguided in retrospect.

“We have contained this, I won’t say airtight but pretty close to airtight,” he said.

This isn't the first time Kudlow has been catastrophically wrong with a prediction about a world-historical event. In December 2007, as the 2008 financial crisis  — which would through the world into a slump for the coming decade — was approaching, he wrote:

There’s no recession coming. The pessimistas were wrong. It’s not going to happen. At a bare minimum, we are looking at Goldilocks 2.0. (And that’s a minimum). Goldilocks is alive and well. The Bush boom is alive and well. It’s finishing up its sixth consecutive year with more to come. Yes, it’s still the greatest story never told.

Of the names listed, none have any expertise in public health, which will be a crucial part of any plan to loosen the measures that have been put in place to constrain the spread of the virus. In fact, it's not clear why the U.S. government needs a separate "task force" or council to deal with the post-shutdown era of the COVID-19 crisis when it already has the coronavirus task force. If that body is lacking in economic expertise, more officials could be brought on board, but setting up and entirely separate body creates the unnecessary possibility of conflict and confusion.