The GOP has become a death cult 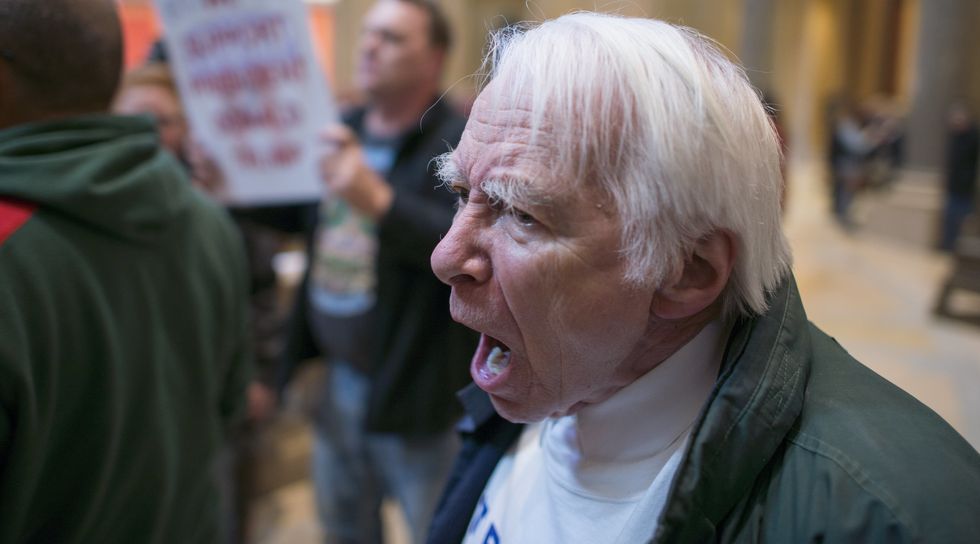 March 4, 2017 // About 700 people gathered at the Minnesota capitol building to show support for Republican President Donald Trump. This was part of "March 4 Trump events around the country. Around 100 people were also there protesting against Donald Trump. // This man was yelling, "TRUMP! TRUMP! TRUMP! TRUMP! TRUMMMMMP!" // 2017-03-04 This is licensed under the Creative Commons Attribution License. Credit: Fibonacci Blue
Mike Lofgren
and
Common Dreams
April 17, 2020

A decade ago, in my first public writing since leaving Capitol Hill, I warned that the Republican Party, in its evolution towards an extremist conservative movement allied with extremist Christian fundamentalism, was becoming like “one of the intensely ideological authoritarian parties of 20th century Europe.” After Donald Trump’s enthronement as the decider of our fate, I analyzed the GOP’s descent into a nihilism that belied every one of its supposed “values.” They value only absolute power or ruin.

It is now long past time to cast off highfalutin’ Latinisms and simply call the Republicans and their religious and secular conservative allies what they are, and in unadorned English: a death cult. As the country reels from the coronavirus pandemic, our national government might just as well be run by the infamous People’s Temple of Jonestown.

By now we are benumbed by the all-pervasive arguments over relaxing workplace shutdowns and stay-at-home orders due to coronavirus. In any sane society, the issue would be how to institute the most efficient measures to defeat the pandemic in the shortest time and with the lowest loss of life. Instead, Trump and his merry band of lunatics have hijacked the national debate into a faux-serious discussion of when, oh, please, how soon, can we “reopen the economy?” Naturally, the media gamely continue to play along with this calculated bit of dezinformatsiya.

This has led to extreme callousness, like that shown by Texas lieutenant governor Dan Patrick, who opined that grams and gramps should be eager to shuffle off this mortal coil for the sake of their grandchildren.

There is abundant empirical evidence against this notion: voters in Florida, known as “God’s waiting room” for its geriatric population, are notoriously averse to paying one cent in state income tax to fund education or child health, let alone lay down their lives. In any case, the 69-year-old Patrick, who claims he’s willing to die for his proposition, did not relinquish the burdens of his office to volunteer as an emergency room orderly.

There’s also Congressman Trey Hollingsworth of Indiana, who put a patriotic gloss on his Malthusianism, decreeing that “it is always the American government’s position to say, in the choice between the loss of our way of life as Americans and the loss of life, of American lives, we have to always choose the latter.”

Then, striking the pose of the Serious Adult in the Room correcting mischievous children, he intoned: “It is policymakers’ decision to put on our big boy and big girl pants and say it is the lesser of these two evils.” This encapsulates the stereotype of the economic conservative: Dickens’s Thomas Gradgrind, the rigid, condescending, and heartless pedagogue.

But some pronouncements from the Trump coalition offer more ethereal rationalizations than the mere pursuit of lucre. The news is replete with stories about evangelical ministers packing their megachurches like sardine cans in defiance of state orders for social distancing, as well as contempt for common sense.

We all know about that harebrained medicine man in Louisiana, Tony Spell, already arrested for violating the state’s prohibition of large gatherings, who continues his antics nonstop. Spell, who sounds as socially responsible as a blood tick, is proclaiming his parishioners ought to choose death: “Like any revolutionary, or like any zealot, or like any pure religious person, death looks to them like a welcome friend. True Christians do not mind dying. They fear living in fear.”

So much for fundamentalists’ vaunted “culture of life,” a slogan which the prestige media never presume to critique.

For a more socially upscale version of this sentiment, let us turn to First Things, a pretentious journal of alleged theology that dresses up its non-stop shilling for the GOP with high-toned words like “numinous” and references to the philosopher Erasmus.

Last month, its editor, R.R. Reno, wrote a piece called, “Say No to Death’s Dominion.” It is an extraordinary performance. Contrary to the title, he actually argues that death should be embraced. He does this by weaving an imbecilic theology that includes falsifying the history of the 1918 flu epidemic to make his basic point:

“In our simple-minded picture of things, we imagine a powerful fear of death arises because of the brutal deeds of cruel dictators and bloodthirsty executioners. But in truth, Satan prefers sentimental humanists. We resent the hard boot of oppression on our necks, and given a chance, most will resist. How much better, therefore, to spread fear of death under moralistic pretexts.”

Oh, I get it! So Mother Teresa and Dorothy Day were more depraved than Josef Stalin! Reno ends with this:

“Fear of death and causing death is pervasive—stoked by a materialistic view of survival at any price and unchecked by Christian leaders who in all likelihood secretly accept the materialist assumptions of our age. “

This insane rant against materialism would seem to contradict the crassly materialistic assumptions underlying economic conservatives’ advocacy for letting a deadly virus “wash over” the population, as Trump would say. But these views, at first sight blatantly opposed, can be reconciled.

And who better to reconcile God and Mammon than a grifter like Jerry Falwell, Jr., ringmaster of Liberty University and testifier to Donald Trump’s status as an emissary of the Almighty? Not only has Falwell continued the school year, virtually alone among American universities, and despite pleading from students and parents to close, he has now been sued for failing to refund fees for student activities that have been suspended.

Fundamentalist preachers’ love of money is no secret: it is only by packing churches that the collection plate will yield a bounteous harvest so that their missionary work can continue – perhaps logistically aided by the purchase of a $65-million Gulfstream executive jet. And why not? It would upstage Pat Robertson, who had a mere Learjet, and a rental at that.

The most cost-efficient industrial process is one that wastes the fewest resource inputs. Likewise, internal combustion engines have evolved to get better mileage even as they pollute less. And electric motors are even more fuel efficient and less polluting.

So how do we explain conservatives’ perverse hatred of the environment, even when there are no profits at stake, as well as their tenacious denial of climate change in the face of irrefutable data? Is it not much the same as the Bible thumper who bitterly condemns stewardship of the environment as Gaia worship?

There are other similarities. Since the 1970s, oil shocks (and coincident with the rise of the New Right) an abiding feature on the American scene has been the survivalist, hoping for the national Götterdämmerung that will vindicate his having stockpiled 10,000 rounds of ammunition and a horde of Krugerrands. This dovetails with fundamentalists’ weird enthusiasm for the prospect of world annihilation that animates belief in the Rapture, the only difference being the technique by which the elect avoid the mass slaughter.

Firearms fetishism and a fascination with violence, war, and armed insurrection are also mainstays of right-wing ideology, hardly distinguishable from Jerry Falwell Sr.’s, proclamation that God is Pro-War. And how about the Ultimate Fighting Jesus? The NRA neatly intersects with “muscular Christianity,” revealing both ideological kinship and some very embarrassing gender insecurities that frequently irrupt in misogyny and homosexual panic.

There is no longer the slightest doubt in any sane person’s mind that not only are the GOP’s fundamentalist-extremist religious allies a death cult disguised as 501(c)3 tax-exempt charitable organizations. The whole extremely well-funded edifice of “economic conservatism” is equally a death cult, worshiping Mammon so fervently that it is eager to make human sacrifice upon its altar, just like the Mayans and Carthaginians.

“Long live death!” That was the defiant cry of José Millán-Astray y Terreros, a general in Francisco Franco’s fascist army during the Spanish civil war. It could just as well suit Trump’s foot soldiers.

Mike Lofgren is a former congressional staff member who served on both the House and Senate budget committees. His books include: "The Deep State: The Fall of the Constitution and the Rise of a Shadow Government" and "The Party is Over: How Republicans Went Crazy, Democrats Became Useless, and the Middle Class Got Shafted."