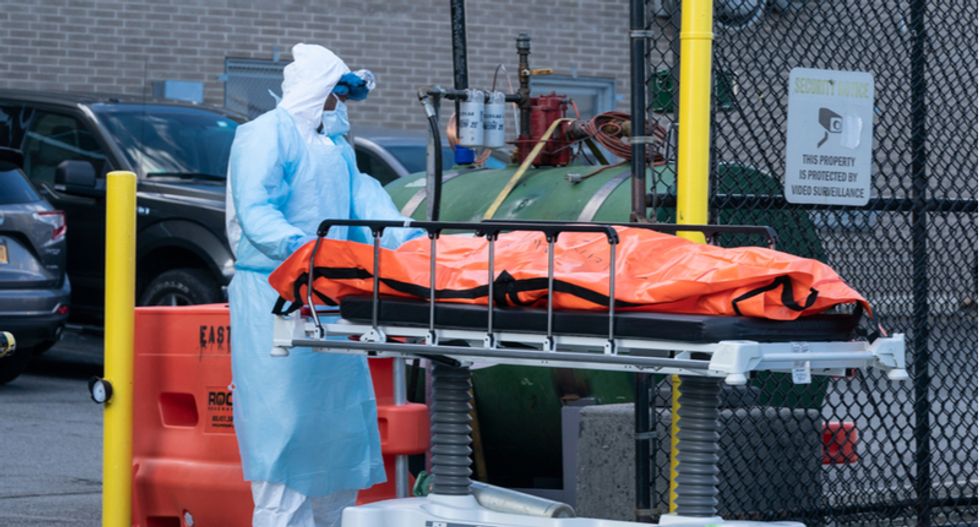 As of this writing, 12,242 people have died in the United States as a result of COVID-19, according to the Centers for Disease Control and Prevention (CDC). Over 5,000 of those losses were in New York, which has become the global epicenter of the pandemic.

But we don't actually know what the true toll from this disease is. The actual number of deaths is higher--possibly much higher.

In New York City, somewhere around 20-25 people die at home on a typical day. But according to City Council Member Mark Levine, who chairs the health committee, between 200 and 215 are dying at home every day at present. As Levine wrote on Twitter, only those "who are known to have a positive coronavirus test have the disease listed as the official cause on their death certificate."

Gothamist reports that the city Medical Examiner's office "is not testing dead bodies for COVID-19. Instead, they’re referring suspected cases to the city’s health department as 'probable.'” And those "probable" COVID-19 deaths aren't included in the tallies.

This is not a problem that's unique to New York. BuzzFeed News reported that "medical professionals around the US [say] that the official numbers of people who have died of COVID-19 are not consistent with the number of deaths they’re seeing on the front lines."

In some cases, it’s a lag in reporting, caused by delays and possible breakdowns in logging positive tests and making them public. In other, more troubling, cases, medical experts told BuzzFeed News they think it’s because people are not being tested before or after they die.

I should note that this is not some conspiracy to conceal the true number of fatalities caused by the pandemic. Insufficient testing capacity has been a consistent issue from the beginning of the outbreak, and confirming that the dead had the disease would be a poor use of such scarce resources.

And in the US, local public health agencies compile data on fatalities and report them to the CDC, and many of those agencies are understaffed and overwhelmed.

The CDC is also forthcoming about the problem. ABC News reports that the agency "is well aware that the figures – which keep going up – do not tell the full story."

“The current data on presumptive and lab-confirmed cases and deaths are underestimates,” CDC spokesman Scott Pauley said Monday. “Right now, we believe that the number of deaths we have reported paints an informative picture of the scope of epidemic.”

While doctors and nurses treating patients on the frontlines and both local and federal public health experts say COVID-19 fatalities are being undercounted, an emerging narrative on the fringe-right is that the opposite is true. Some, motivated by partisanship to discount the experts, claim that deaths due to other causes are being recorded as COVID-19 deaths in a sprawling conspiracy to hurt Trump's chances in November. Given that we do not know the true number, one can expect that narrative to enter the conservative mainstream at some point, possibly promoted by Donald Trump himself.

If that comes to pass, it will continue and deepen a trend that's been evident since the beginning of the crisis, with people on the left and right divided not only in their opinions of the regime's handling of the crisis, but also embracing very different sets of facts, or"facts," about its severity.