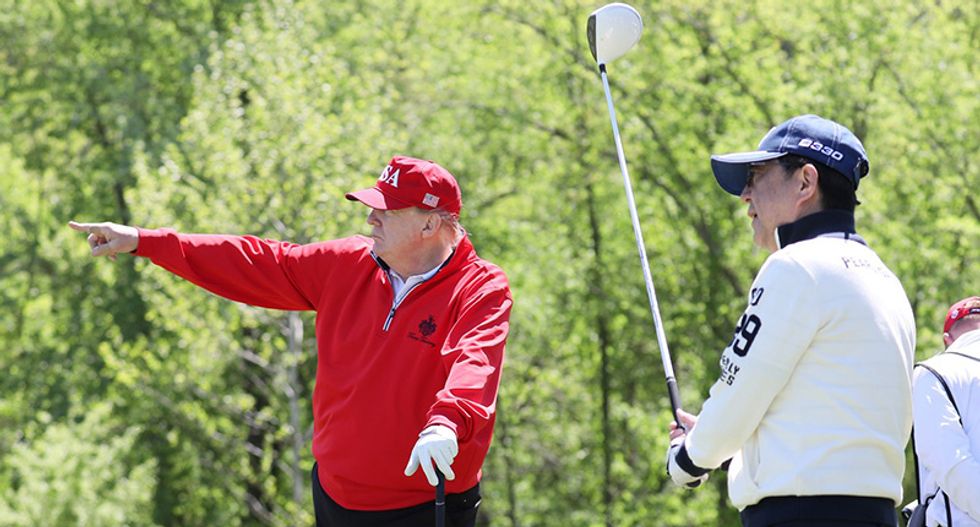 The Secret Service signed a $45,000 "emergency order" to rent golf carts at President Donald Trump's Virginia golf club on Monday, according to The Washington Post.

The agency signed a contract, which it described as an "emergency order," to rent 30 golf carts from a West Virginia-registered company called Capitol Golf Cars and Utility Vehicles from April 1 until the end of September, according to the report. The contract did not mention Trump but it "closely mirrors" previous contracts the agency signed before protecting the president at his New Jersey and Florida golf resorts.

Cathy Milhoan, a spokeswoman for the agency, told The Post that "emergency" did not refer to a security "emergency." "Rather, the term was used to signal a need for expedited handling of the procurement due to deadlines within the agency's business processes," she told the outlet.

The golf carts were rented in Northern Virginia to protect a "dignitary" in the town of Sterling, which is where Trump National Golf Club Washington DC is located.

Though Virginia Gov. Ralph Northam issued a 70-day stay-at-home order, golf courses are allowed to stay open as long as they comply with social distancing guidelines.

The club has issued new rules for members, warning them not to share golf carts or touch equipment.

"Do not gather in groups around the Clubhouse," the club said in an email obtained by The Post. "Golf is an excellent avenue for exercise, camaraderie and provides a much-needed distraction."

Trump has avoided playing golf and largely avoided leaving the White House since March 8, when he last played golf at his now-shuttered West Palm Beach club.

Trump has visited the Virginia golf club 76 times as president, according to The Post. He often goes there for day trips while using his other clubs for extended stays.

Trump has spent more than 350 days at his properties since taking office, according to the outlet's count, which has cost taxpayers more than $620,000.

The Post's David Farenthold noted that golf cart rental contracts like the one signed by Secret Service this week usually precede Trump's trips.

"Even during a pandemic, the Service seems to be preparing for presidential golf trips," he said.

Trump claimed that he would not be leaving the White House "for the most part" during a news briefing on Wednesday.

"I'll be in the White House. And it's sort of like nerve center, control center," he added. "And I think it's important — you know, look, you see what happened with Boris Johnson, you see what happened with others. I think it's important that I remain healthy. I really do. So, for the most part, we're staying here. I've canceled many different events, and we'll be staying here, for the most part."

Trump recently extended federal guidelines urging people to stay at home until April 30, though models presented by the White House task force showed that the virus trajectory was expected to stretch into June.

Trump's apparent plans to take a golf trip drew condemnation as the number of coronavirus deaths quickly eclipsed the death toll from the 9/11 attacks.

"In the middle of a pandemic, the Secret Service signed a $45,000 'emergency order' to rent golf carts at Trump's VA golf course," the progressive advocacy group Stand Up America said in a statement. "Once again, Trump personally profits and we foot the bill."

Juli Briskman, a government official in Virginia's Loudoun County who is best known for flipping off Trump's motorcade during another golf trip, responded to the report by calling for the club to be closed.

"How about an emergency order for ventilators?!" she wrote. "We don't have a golf cart emergency in my District! We have a blooming healthcare crisis. I've already questioned golf courses staying open amid a statewide stay-at-home order. Trump National should close!"