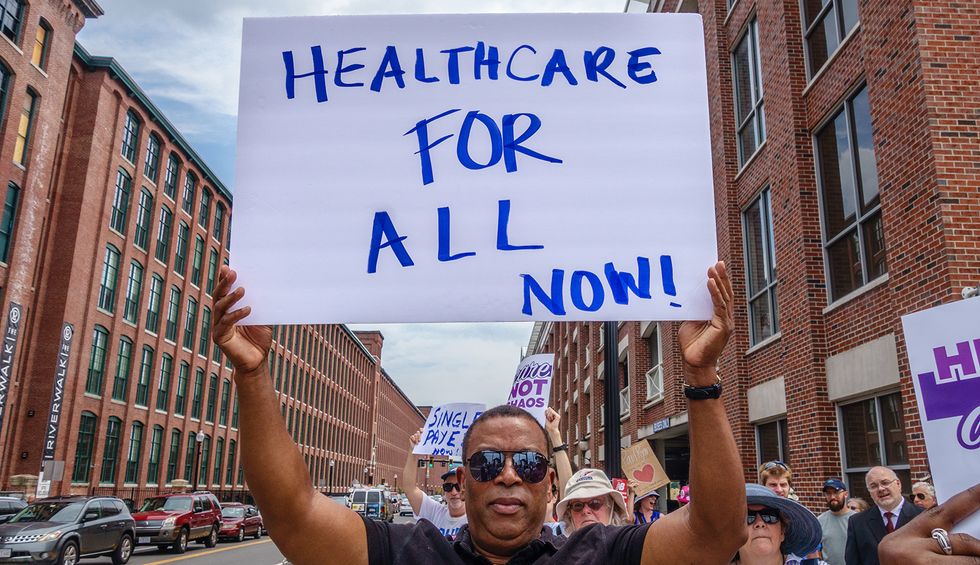 New polling out Wednesday backdropped by the continuing coronavirus outbreak shows that most of the country believes the U.S. political system works only for the wealthy and elite rather than for working people.

In a survey of 1,002 Americans taken by The Hill/HarrisX, 57% of respondents said they believe the political system serves the interests of the wealthy and powerful versus 32% who said it works for all Americans.

Republicans were the only subgroup in which a majority of respondents said the system works for everyone.

The poll, which had a margin of error of 3.1 percentage points, was taken between March 22 and 23, as lawmakers debated a relief package amid the coronavirus pandemic. The package contained a $4.5 trillion "slush fund" for powerful corporations while providing a one-time payment of $1,200 for a portion of working Americans and an expansion of some unemployment benefits.

President Donald Trump signed the legislation package days later. The bill also includes billions of dollars in loans for major corporations like Boeing while demanding little to no meaningful oversight by Congress of the Treasury Department's distribution of the funds.

Earlier in March, the Democratic-led House pushed through the Families First Coronavirus Response Act, which included paid sick leave only for companies with fewer than 500 employees, leaving out workers at some of the wealthiest employers in the country.

Medicare for All proponents in March noted that a single-payer healthcare system could have protected millions of Americans from losing their health coverage as businesses laid off and furloughed employees as the disease spread. As Common Dreams reported, former Vice President Joe Biden, the Democratic presidential primary frontrunner, insisted Medicare for All would not have improved outcomes for Americans as the virus spread across the country.

Politico on Tuesday published an article describing the coronavirus pandemic as an "equalizer," forcing wealthy and low-income Americans to struggle alongside one another amid medical supply and coronavirus test shortages. But while the virus itself does not discriminate according to wealth, critics on social media said, the U.S. political system has placed low-income workers and other marginalized people at greater risk of danger.

"Actually, the pandemic is showing how unequal our society is," author and law professor Dorothy Roberts tweeted in response to the article. "It also puts people of color, poor, low-income, disabled, incarcerated, unhoused, and undocumented people at greater risk."