Mike Pence's refusal to wear a mask in a COVID ward was a display of cowardice, not courage 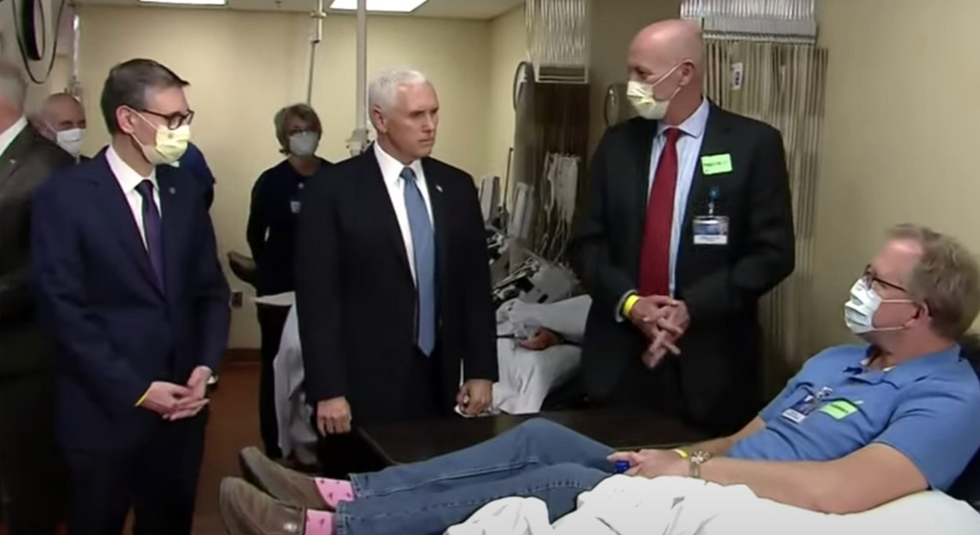 I’ve never focused on Mike Pence. That might be due to his being a non-entity. Like most people, I don’t care enough about the vice president to bother forming an opinion about him. Circumstances, however, have forced me to.

Pence is no dummy. What gives?

Some have speculated he doesn’t believe he needs one. As a twice-born conservative Christian, he likely believes faith in Jesus Christ as his personal Lord and Savior literally immunizes him against the coronavirus. Given that Pence never lets you forget his devotion to the unerring Word of God, this would seem a good theory.

Such speculation is given greater credence by the theory of “muscular Christianity” that developed over two decades. After the Cold War ended, evangelicals were open to “soft patriarchy,” according to Kristin Kobes Du Mez. But after Sept. 11, 2001, “a more militant Christian masculinity returned with a vengeance.” Du Mez: “From hundreds of books that collectively sold millions of copies, evangelicals were told that men were called to be warriors and that masculine aggression was God’s gift to humanity.”

By the time of the 2016 election, Du Mez wrote, white evangelical Christians had been reveling in the idea of an ass-kicking Christ for years. The Rev. Robert Jeffress said he wanted for president “the meanest, toughest, son-of-a-you-know-what I can find in that role.” In Donald Trump, they found what they were looking for. So Mike Pence didn’t wear a mask Tuesday for three reasons. One, he’s a Christian. Two, he’s a man. Three, he’s a Christian man. And real Christian men don’t need no stinking masks.

I mean, these are interesting theories. But I think they give too much credit to the vice president and white evangelical Christians leaders unwavering in support of a lying, thieving, philandering sadist who also happens to be the president. More importantly, they implicitly accept the legitimacy of American evangelism’s definition of manhood.

If Pence were really a manly Christian unafraid of catching the coronavirus among people who were recovering from it, why didn’t he just say that? Sure, he would have courted controversy, but so what? The president’s supporters would have loved it.

Instead, Pence lied. He said he was following Centers for Disease Control and Prevention guidelines. Actually, the CDC’s guidelines, according to NPR, recommend “wearing cloth face masks in public to help prevent transmitting the virus to others.”

Pence lied in another way. He said he is tested every day to make sure he isn’t infected. “And since I don't have the coronavirus,” the vice president said, “I thought it’d be a good opportunity for me to be here, to be able to speak to these researchers, these incredible health care personnel, and look them in the eye and say ‘thank you.’” Again, Pence is no dummy. He understands the difference between being uninfected and being immune to future infection. He is one, but not the other. Why did he lie?

Mike Pence conforms so much to the president that he’s even starting to look like him. I’m can’t be alone in noticing the manner in which he toured the Mayo Clinic Tuesday—leaning forward slightly, arms dangling, appearing to tiptoe, as if he shared Trump’s heft and girth. He’s less Iron Vice President than Mighty Morphin Power Pence.

Manly Christians like to brag about being self-reliant. All they need is Jesus, after all. But self-reliance takes courage. It takes standing up to power when necessary, as Christ did. “Whoso would be a man must be a nonconformist,” wrote Ralph Waldo Emerson. “He who would gather immortal palms must not be hindered by the name of goodness, but must explore if it be goodness. Nothing is at last sacred but the integrity of your own mind. Absolve you to yourself, and you shall have the suffrage of the world.”

Pence isn’t alone. The Christians who triumph in the belief that “the meanest, toughest, son-of-a-you-know-what” is the president are the same ones wailing about unfair persecution in American modernity. They complain with breathtaking consistency, which might be admirable if consistency, as Emerson said, weren’t “the hobgoblin of little minds, adored by little statesmen and philosophers and divines.”