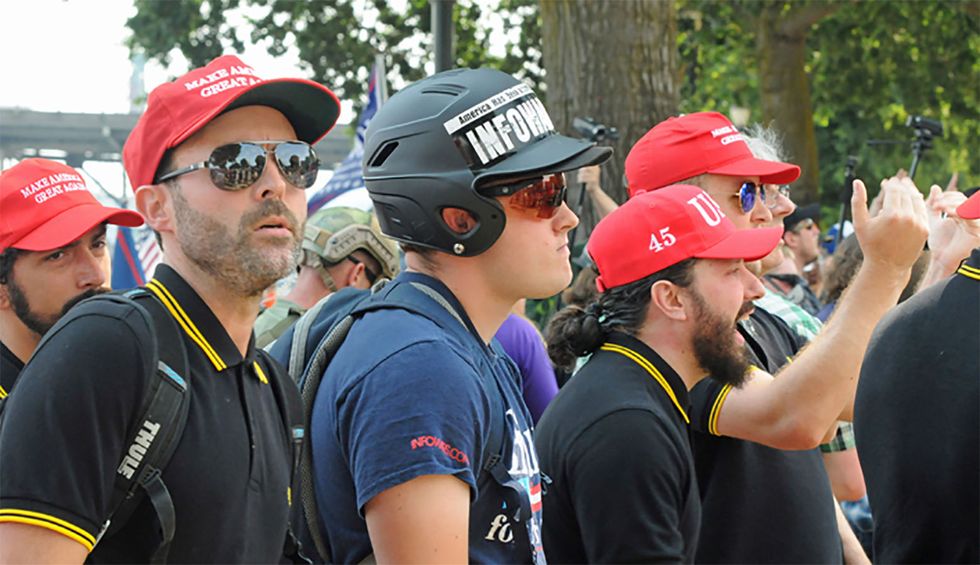 According to a Politico/Morning Consult poll released earlier this week, 81% of Americans believe that the United States “should continue to social distance for as long as is needed to curb the spread of coronavirus.” In other words, most Americans are smart enough to realize that while social distancing is inconvenient and difficult, it is certainly preferable to dying from COVID-19. But a minority of far-right extremists have been holding rallies and protests against social distancing. And journalist Jason Wilson, in an article The Guardian, takes a look at some of the groups behind those protests.

“While protesters in Michigan, Ohio, Kentucky and other states claim to speak for ordinary citizens, many are also supported by street-fighting right-wing groups like the Proud Boys, conservative armed militia groups, religious fundamentalists, anti-vaccination groups and other elements of the radical right,” Wilson explains.

One of the protests occurred in Michigan on Wednesday, April 15. According to Wilson, that demonstration was organized by the Michigan Conservative Coalition, a.k.a. Michigan Trump Republicans, and was “also heavily promoted by the Michigan Freedom Fund, a group linked to Trump cabinet member Betsy DeVos.” Placards, Wilson adds, “identified the Michigan Proud Boys as participants in the vehicle convoy.”

“The pattern of right-wing not-for-profits promoting public protests while still more radical groups use lockdown resistance as a platform for extreme right-wing causes looks set to continue in events advertised in other states over coming days,” Wilson explains.

In Boise, Idaho, for example, protestors planned to demonstrate against social distancing measures ordered by Gov. Brad Little, a Republican. According to Wilson, the Boise protest was “heavily promoted by the Idaho Freedom Foundation (IFF), which counts among its donors ‘dark money’ funds linked to the Koch Brothers such as Donors Capital Fund, and Castle Rock, a foundation seeded with part of the fortune of Adolph Coors, the right-wing beer magnate.”

In Washington State, according to Wilson, an anti-social distancing protest has been organized by Tyler Miller — a Republican committeeman who “was involved in passing a resolution in January in support of Rep. Matt Shea.” As Wilson notes, Shea has been linked to “domestic terrorism” and is so extreme that many Republicans in the Washington State legislature have shunned him.

“As for Shea,” Wilson observes, “he is speaking on Saturday at an online ‘saving America’ conference which will discuss an alleged erosion of rights ‘that’s been ramped up in unprecedented ways during this COVID-19 crisis.’”