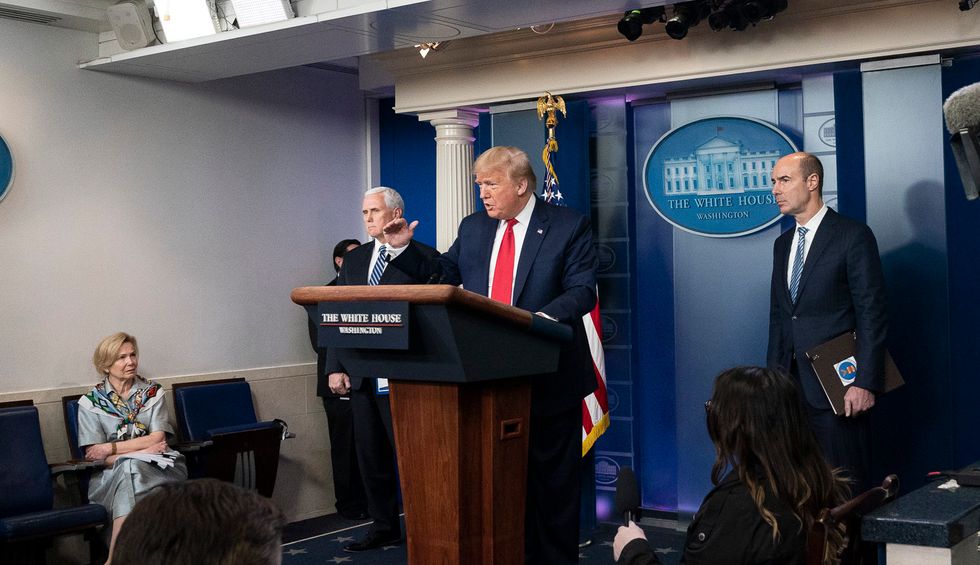 When President Donald Trump held his nightly White House press briefing on the coronavirus pandemic on Friday, April 24, a White House staffer was determined to micromanage which journalists would be seated where — and Washington Post media critic Erik Wemble offers a scathing analysis in a video posted on Twitter and YouTube, explaining why the staffer’s actions were so egregious.

“The White House is invoking the Secret Service and using cheap intimidation tactics to scare reporters into other seats,” Wemple asserts in the video. And the Post media critic goes on to say, “They’re using these seats to accomplish a change in tone in the briefing room. The president doesn’t want to answer — or even face — the sort of questions that CNN and other outlets are asking in that briefing room. It doesn’t matter where you put the reporters; those questions have to be answered.”

We got a bit of footage of the White House trying to reassign seats before Friday night’s briefing: https://t.co/RnhDLOrflJ
— ErikWemple (@ErikWemple) 1588032264.0

In video footage taken before the press conference got underway, Wemple explains, Katie Price (a White House official) is seen asking Washington Blade reporter Chris Johnson to move from the back of the White House briefing room to the front row — where CNN’s Kaitlan Collins had planned to sit.

Wemple, in the video, asserts, “It’s not Price’s role or job to tell reporters where to sit. It’s not even the president’s job or the chief of staff’s job. That job falls to the White House Correspondents’ Association.”

In the video, Wemple explains that the WHCA was founded in 1914 when Democrat Woodrow Wilson was president — and one of things it is designed to do is make sure that reporters who are likely to ask tough questions aren’t marginalized. In other words, someone like Collins, theoretically, should be seated near the front because she is more likely to ask tough questions. The WHCA, as Wemple lays out in the video, is designed to encourage reporters to act as watchdogs — which is what they are supposed to do in a democratic republic.