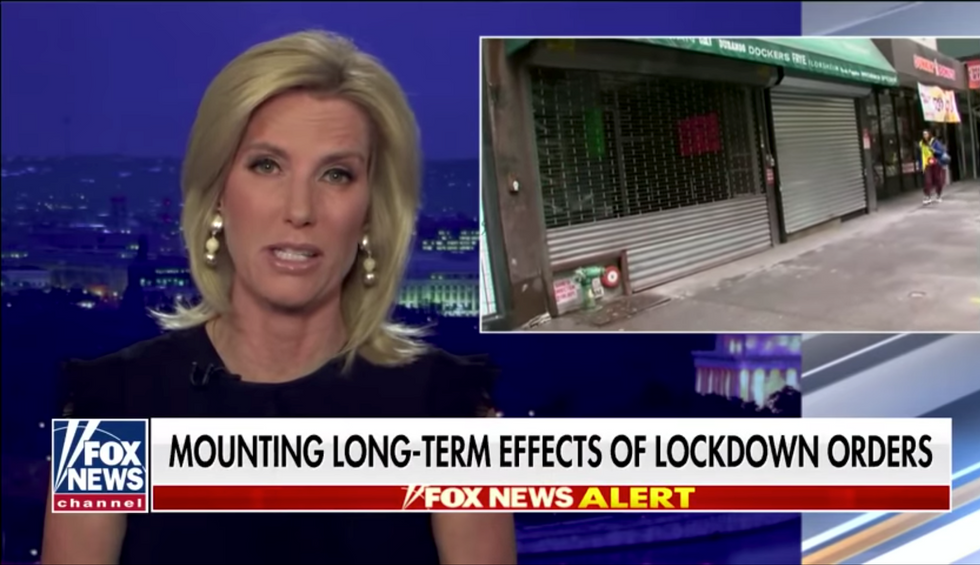 This week, Fox News’ far-right Laura Ingraham has been trying to make a case for easing social distancing restrictions in the United States. A recurring theme on Ingraham’s show has been that social distancing and stay-at-home orders have been going too far and that mainstream media coverage of the coronavirus pandemic is overblown — and on Thursday night, she discussed the pandemic with guests who included Dr. Phil McGraw and immunologist Dr. Anthony Fauci.

And now she is being slammed by critics for both interviews.

McGraw, like Ingraham, views the social distancing measures and stay-at-home orders in many states as an overreaction, and he argued that if the U.S. economy isn’t shut down because of deaths associated with cigarette smoking, traffic accidents or swimming polls, why shut it down because of COVID-19?

McGraw told Ingraham, “250 people a year die from poverty, and the poverty line is getting such that more and more people are going to fall below that because the economy is crashing around us. And they’re doing that because people are dying from the coronavirus. I get that, but look, the fact of the matter is: we have people dying —45,000 people a year die from automobile accidents, 480,000 from cigarettes, 360,000 a year from swimming pools. But we don’t shut the country down for that, but yet, we’re doing it for this. And the fallout is going to last for years because people’s lives are being destroyed.”

Media Matters’ John Whitehouse has cited some other examples of criticism McGraw has been receiving for his comments. For example, Twitter user @KenTremendous wrote that auto accidents would have the deadly potential of coronavirus if “you, the guy next to you in traffic got into an accident and died, and then, a week later, everyone who was in traffic near him died.” And psychologist Bryan Harnsberger posted, “As a member of the behavioral health community, I just want to say @DrPhil doesn’t speak for us. He was never a real member of the community. And, frankly, he’s a goddamn idiot.”

If you the guy next to you in traffic got into an accident and died, and then a week later everyone who was in traf… https://t.co/GGme6QS2fo
— Ken Tremendous (@Ken Tremendous)1587092452.0

@KenTremendous It's insane if he genuinely doesn't understand that those all result from (to varying degrees) risky… https://t.co/Xb2k4yEwFY
— Steve Kriske (@Steve Kriske)1587092923.0

When Ingraham featured Fauci as a guest, she tried to get him to disagree with statements that former Vice President Joe Biden made on CNN about the pandemic. Biden warned, “This thing isn’t going to be over until we have a vaccine.” But Greg Sargent, in his Washington Post column, asserts that “Fauci declined to take the bait” and told Ingraham, “There’s truth to that: it’s not going to be over to the point of our being able to not do any mitigation, until we have a scientifically sound, safe and effective vaccine. But that does not mean we can’t approach a significant degree of normality.”

Sargent explained, “In saying this, Fauci walked a careful line. He acknowledged Biden is right in his depiction of the scale of the continuing threat and the need to continue taking action against it, while also nodding toward Trump’s desire to get the economy going again.”

Trump supporters like Ingraham, Sargent notes, “need scientists like Fauci to declare that Biden is flatly wrong in his depiction of the continuing threat and that Trump is absolutely right about it. But they can’t do that because Biden is fundamentally right and Trump is fundamentally wrong in the following sense: to reopen society safely, we need a far more robust federal response than the one Trump is willing to muster.”