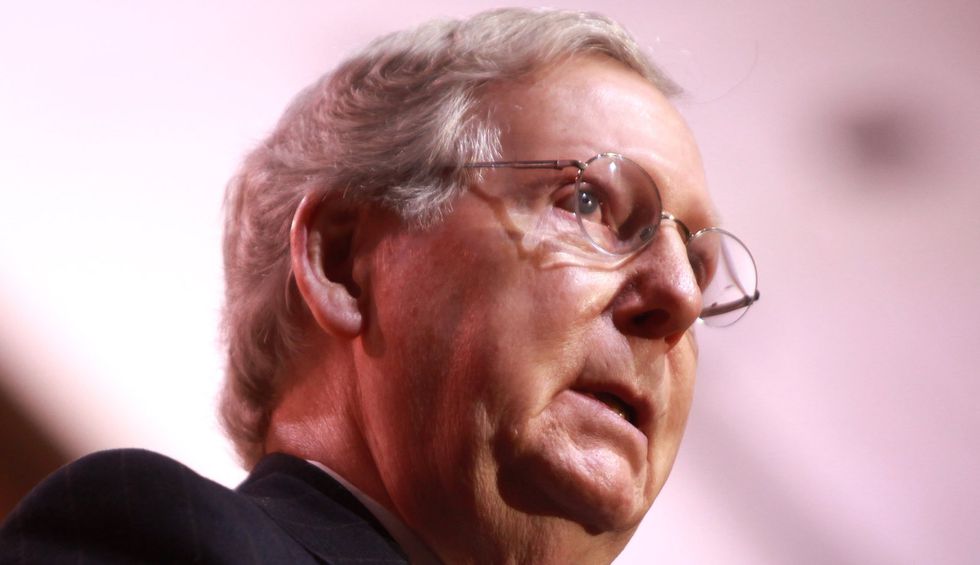 Thursday's White House coronavirus rally will go down in history as the day the president directed the scientists to investigate whether ultraviolet light can somehow be put inside COVID-19 patients to kill the virus, or whether disinfectant can be injected into their lungs to clean them. He was very proud of himself, obviously believing that he'd discovered some kind of breakthrough after hearing a briefing about how ordinary people can kill the virus in their homes.

One shudders to think what it must be like to be in meetings with this person. It brings to mind former Secretary of State Rex Tillerson's famous quote after trying to teach him some basics about international relations: "He's a fucking moron."

Katherine Eban's reporting for Vanity Fair about the White House hydroxychloroquine debacle reveals that Trump sent government health agencies into a tailspin trying to fulfill his desire for a miracle cure. So if anyone was thinking that these "directives" from Dr. Trump are ignored, we now know better. We can only imagine what kind of "trials" for internal UV light and Clorox cures they are scrambling to set up as we speak.

But that wasn't the only disturbing thing Trump had to say. One might have thought he'd spend the entire rally patting himself on the back for Thursday's passage of the CARE Act extension to help small business, but he seemed uninterested in that. When asked about the desperately needed help for state and local government, which he'd previously said he favored, this was the president's response:

He's indicating that he sees political advantage in following Mitch McConnell's scheme to use the crisis to bankrup… https://t.co/hNsnpXxEGs
— digby (@digby)1587708237.0

Senate Majority Leader Mitch McConnell is planning to use this crisis to break the backs of public employee pension funds in liberal states and punish people who vote for Democrats. On Wednesday, McConnell told right-wing radio personality Hugh Hewitt that state and local governments facing revenue shortfalls from this crisis, some of which are forced by law to balance their budgets, may have to go bankrupt because he has no plans to allow the federal government to help them out.

He said these states and cities can use this crisis to solve their "pension problem," and that he's saving he's saving future generations from their fiscal irresponsibility. He later made clear just exactly which states he was talking about by putting out a memorandum in which he described the states requesting help as  "Blue State Bailouts."

Of course the man who blithely passed massive tax cuts for the rich and allowed military spending to grow to unprecedented levels over the past three years, without batting an eye, is now deeply concerned about budget deficits in Democratic states.

This announcement was met with a sharp retort from New York Gov. Andrew Cuomo, who will be faced with even more devastation if he's forced to lay off first responders, firefighters, teachers and other state and municipal employees in the epicenter of the pandemic. Cuomo said:

It really is offensive. You talk about one issue where you think you can get past partisanship and pettiness, and now you talk about helping communities where people are dying, and you say they are blue states? If there was ever a time for humanity and decency … and a time to stop your obsessive political bias and anger, now is the time.

Rep. Peter King, a Republican from a suburban district on Long Island — where many of New York City's police officers, firefighters and other public-sector workers live — was equally unamused:

McConnell's dismissive remark that States devastated by Coronavirus should go bankrupt rather than get the federal assistance they need and deserve is shameful and indefensible. To say that it is "free money" to provide funds for cops, firefighters and healthcare workers makes McConnell the Marie Antoinette of the Senate.

It's hard to see what Trump and the Republicans have to gain by this outrageous abdication of responsibility. After all, it isn't only blue states that are affected by this virus. States that Trump needs to win the election — and that McConnell needs to hold the Senate — are also in dire need. Any hope of an economic upturn will be out of the question if half the country is in a state of financial ruin.

But this is McConnell's style, and a reflection of his nihilistic worldview in general. He and his fellow travelers have decided that the coronavirus is mainly a problem for their political enemies, and they are going to seize the opportunity to kick them when they're down. It's hitting cities and black and brown people especially hard, and those people in those places don't vote for Republicans. Cuomo said it plainly on Wednesday:

What he's saying is the blue states are the states that have the coronavirus problem. They are Democrats — so why should he bail out the blue areas?

In fact, under current law state governments are unable to declare bankruptcy, and they can't easily borrow money due to constitutional budgetary constraints. So the federal government is their only hope. If McConnell holds firm, vast numbers of public employees will lose their jobs since the states will simply be unable to pay them. Of course, for the likes of McConnell, that's a feature not a bug. If services for vulnerable citizens have to be eliminated in the middle of a global catastrophe, that's just fine too.

As for McConnell's alleged worries about where the money will come from, as New York Times columnist Paul Krugman pointed out last week, this is the time for federal borrowing:

Right now, the economy is awash in excess savings with nowhere to go. The interest rate on inflation-protected federal bonds is minus 0.56 percent; in effect, investors are willing to pay our government to make use of their money. Financing economic relief just isn't a problem.

Anyway, we know for sure that Mitch McConnell has no real concerns about deficits or borrowing. After all, he had no qualms about offering "bailouts" to big companies with virtually no oversight just two weeks ago when he insisted, "We have an obligation to the American people to deal with this emergency."

It's unclear exactly how McConnell hopes to thread the needle of only helping red states while leaving the blue states twisting in the wind. But he'll have to find a way, because plenty of red states are going to need the same kind of help. Perhaps he thinks he can hold any further aid hostage until blue-state governors agree to eliminate public employee pensions, but that's a tricky business when his own voters will be hostages as well. But McConnell doesn't gleefully call himself "the Grim Reaper" for nothing. If anyone's willing to risk his own constituents' lives to score political points, it's him.

This upcoming campaign should be one for the books. The incumbent president and his party have decided that their best bet to win over the country during an unprecedented crisis will be too give as much money as possible to big business, force states into bankruptcy and destroy the pensions of cops, firefighters and teachers as the pile of dead bodies gets higher and higher.

McConnell famously said back in 2009 that his job was to make Barack Obama a one-term president. He failed. It looks as though he may get the job done for Donald Trump instead — while destroying the country in the process.