Here's the truth about those Trump-backed anti-shutdown protesters 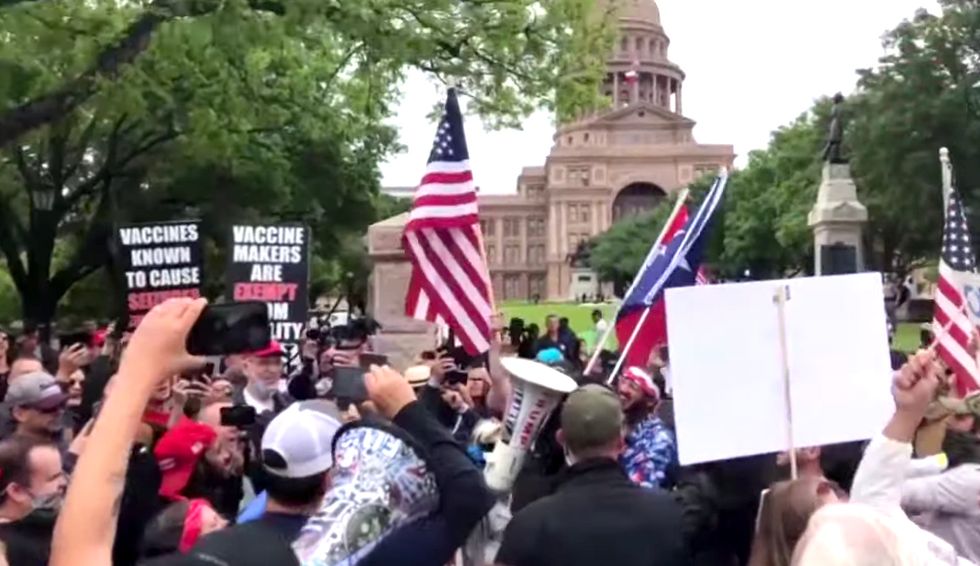 The media needs to do better when it comes to Donald Trump and the recent spate of well-organized protests against coronavirus restrictions. We’re talking about large groups of people standing around shouting without masks, so lives are at stake here before we even get to the guns some of them are carrying—and Trump is encouraging actual violence in states with governors who aren’t bending to his pressure to loosen restrictions.

But from media organizations like The New York Times we get hot messes like this one by Maggie Haberman. Haberman highlights the contradictions in Trump’s recent rhetoric, how he’s veered from claiming he’ll work with governors to tweeting “LIBERATE.” But the basic presentation of the protests is a staggering misread: “So far, the protests have been relatively small and scattershot, organized by conservative-leaning groups with some organic attendance.”

About that. “A Who’s Who of the American Right is behind all of this,” online extremism expert Melissa Ryan writes. “The protest in Michigan, which I believe is the largest we’ve seen to date, was organized by a right-wing group funded by the DeVos family. Three of the largest Facebook groups are run by the "Dorr Brothers, The Convention of States is hosting an interactive map called Open the States, tracking which states are planning protests and are linking to those groups’ Facebook pages. The organization’s head is Tea Party co-founder Mark Meckler.”

And while Trump was, as Haberman reports, saying that “These are people expressing their views. They seem to be very responsible people to me” and they’ve been treated “rough,” online extremists were talking about violence, starting to “speculate whether the president was advocating for armed conflict, an event they’ve termed ‘the boogaloo,’ for which many far-right activists have been gearing up and advocating since last year,” NBC News reported. There were more than 1,000 tweets about “the boogaloo” on Twitter immediately following Trump’s “LIBERATE” tweets, and some got hundreds of retweets, according to NBC News.

Haberman’s focus is on what Trump’s doing here, and she understands who he is as a personality—“Hurtling from one position to another” and “nursing grievances” and “most comfortable raging against the machine of government, even when he is the one running the country.” She also cites two unnamed “people close to” Trump who “said they thought the protests could be politically helpful to Mr. Trump, while acknowledging there might be public health risks.” But by not acknowledging either the level of organization behind the protests or the true threat of violence Trump is encouraging, she and her editors at The New York Times do readers a major disservice.

In an interview with the Post, Giroir said that the performance review was much more about vicious internal politics at Texas A&M than about the actual work he did during his time there.

“If you’re not familiar with academic politics, it makes politics in Washington look like a minor league scrimmage,” he said. “I’m a team player. But not to people who act inappropriately, who are misogynistic and who are abusive to other people. I don’t have a loyalty to that. I have a loyalty to my faculty and my students. And that’s what I care about.”