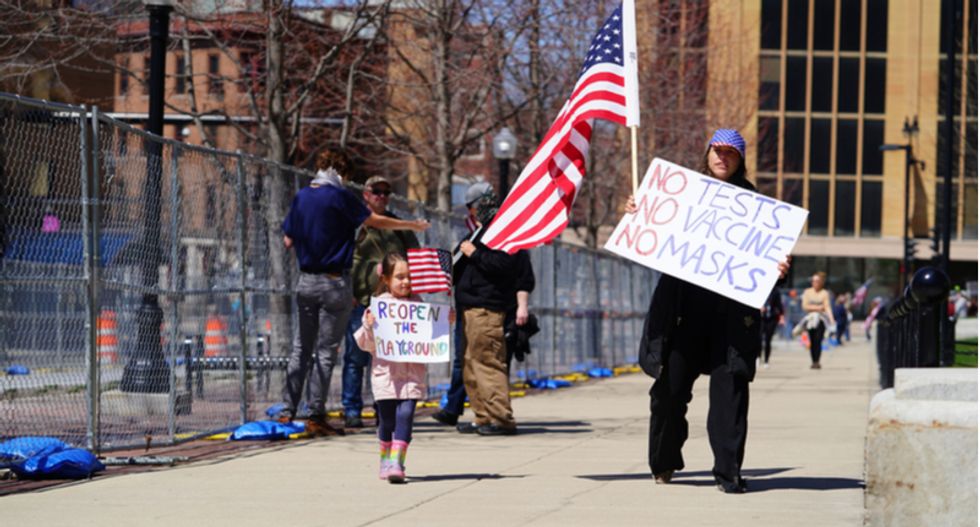 Most Americans understand that we can't re-open the economy until we have much more capacity to test people, trace those who have interacted with the infected and isolate those who are contagious. Polls continue to find that between 70-90 percent of the public opposes loosening stay-at-home restrictions to jump-start the economy.

To date, there has been very little organic resistance to the patchwork of stay-at-home orders that have kept 300 million Americans mostly at home. But Trump and a handful of Republican governors believe that they can deflect blame for mismanaging the crisis onto Democrats, and perhaps minimize unemployment, if they can make those orders into a partisan fight rather than a data-driven response to a public health crisis. Thanks to the conservative media, they have been relentlessly promoting an "Astroturf" campaign centered around small, fringey protests that "has been driven by wealthy conservative groups."

The first is that the novel coronavirus is a virulent pathogen that spreads exponentially. This means that those who contract the virus spread it to multiple others. Most epidemiological studies estimate that each person who catches COVID-19 will infect between two and three other people, on average. But one study released by the CDC earlier this month suggests that the number may be even higher.

This is why the rhetoric of personal choice is ludicrous in the midst of a pandemic.

Because the disease spreads exponentially, people "who want to go to work and feed their families" aren't just putting their own health at risk. Those who contract the disease cause an average of two or three--or maybe five!--other people to also come down with the disease. So they're risking the health of other people, including those who may be more susceptible to serious illness and death. As the old saying goes, “your personal liberty to swing your arm ends where my nose begins.” Only collective action can mitigate the outbreak. This is not a complicated concept, nor is it matter of subjective opinion.

The second straightforward fact is related to the first: Our healthcare capacity is finite, and if hospitals are overwhelmed, the case-fatality rate of COVID-19--the share of people who contract the disease and don't survive it--will go up. It is,  once again, a plain fact that those who suffer severe illness from COVID-19 require 13 days of respiratory support, on average, and our healthcare system only has so many hospital beds, ventilators, doctors and nurses, etc. In New York City, "some have died inside the emergency room while waiting for a bed." Italy, which saw its health care system quickly become overwhelmed, has a case-fatality rate--the share of confirmed cases that end in death--of 13 percent, one of the highest in the world.

So not only are those who refuse to practice social distancing putting other people's health at risk, if enough people do so to cause a spike in seriously ill people that exceeds our capacity to treat those patients, they would also cause a greater share of those who contract the virus to die.

These two simple, straightforward realities are why there is no serious debate about whether we should jump-start the economy or contain the outbreak of COVID-19. Republican officials and their allies in the conservative media are being willfully obtuse when they push this false dichotomy. Empirical studies of the economic impact of the "Spanish Flu" have found that communities that took more aggressive measures to contain that pandemic saw their economies recover more quickly and more robustly than those that were more cavalier and didn't impose such restrictions.

So the choices before us are simple: We can do either what we must to "flatten the curve" and suffer fewer illnesses, have a lower death rate and experience a faster economic recovery, or we can loosen up the social distancing and face both a more severe public health crisis and a longer, deeper recession. Again, there's no serious debate.