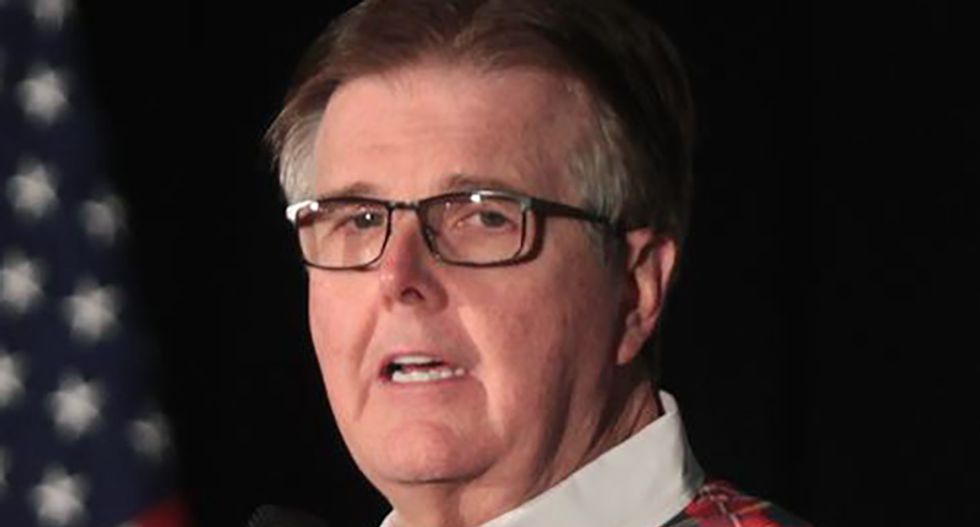 Far-right Texas Lt. Gov. Dan Patrick has been inundated with criticism for his recent assertion that if more coronavirus deaths is the price that the U.S. has to pay for reopening its economy, so be it. And instead of walking back that assertion, Patrick doubled down on it during an appearance on Tucker Carlson’s Fox News program.

Social distancing, Patrick stressed to Carlson, is crushing the U.S. economy — and saving lives, Patrick insisted, isn’t the only thing to be concerned about.

Patrick told Carlson, “When you start shutting down society and people start losing their paychecks and businesses can’t open and governments aren’t getting revenues…. I’m sorry to say, I was right on this. And I’m thankful that we are now, Tucker, beginning to open up Texas and other states because it’s been long overdue.”

Media Matters’ Andrew Lawrence tweeted a clip of Patrick making those assertions, and plenty of Twitter users have been slamming the Texas lieutenant governor.

@EdKamen posted, “Texas Lt. Gov Dan Patrick said, ‘There are more important things than living.’ Uh ... what are they?” And @RogueSNRadvisor wrote, “Yeah he wants everyone else to take the risks.”

Australia-based Twitter user Suzie Calalesina, @SuzieGabriella, cited Patrick as a prime example of why so many people around the world view U.S. politics as a mess.

“Is this for real???,” Calalesina posted. “In Australia we went into lockdown in March and if our politicians spoke like this they would gone!!! I’m sorry but the US is in worse shape than is thought globally.”

@660Mary tweeted, “I don’t EVER want to hear another conservative Republican claim to be pro-life! EVER! @LtGovTX.” And @Panos_Iliop wrote, “This is, without a doubt, the stupidest thing I’ve ever heard. What are these people on?”

@EdKamen @TurnKansasBlue @ndrew_lawrence I think Dan Patrick meant that there are more important things to *him* than *other* people living.
— Kansas Grant (@Kansas Grant)1587444264.0

@ndrew_lawrence Is this for real??? In Australia we went into lockdown in March and if our politicians spoke like t… https://t.co/ILo8QNEBZA
— enoughisenough (@enoughisenough)1587430750.0

@ndrew_lawrence This is, without a doubt, the stupidest thing I've ever heard. What are these people on?
— Panos Iliopoulos (@Panos Iliopoulos)1587430613.0