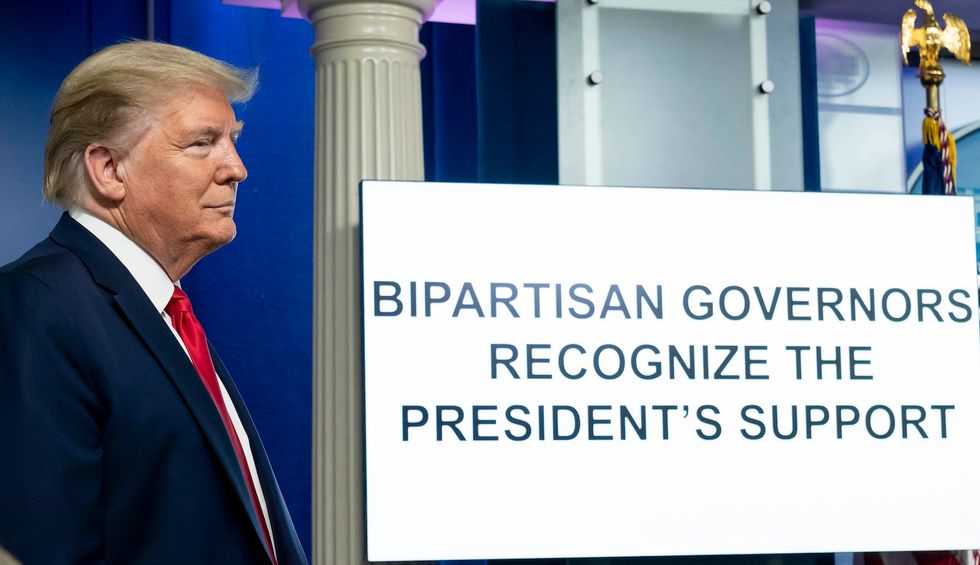 President Donald Trump has been criticized in numerous media outlets for the weeks he spent downplaying the dangers that the coronavirus pandemic posed for the United States. But when Trump held a coronavirus-related press conference on Monday, he showed journalists a video making the ludicrous claim that it was the mainstream media — not Trump — who downplayed COVID-19’s severity.

And according to attorney Walter Shaub, the former director of the U.S. Office of Government Ethics, the video “may have violated a legal prohibition against using appropriated funds for the dissemination of unauthorized publicity or propaganda.”

In an article for the website of Citizens for Responsibility and Ethics in Washington, Shaub writes, “The video, which had the feel of a campaign ad, prompted stunned reactions on social media and among news outlets. It opened by falsely characterizing media outlets as having downplayed the pandemic ‘WHILE PRESIDENT TRUMP TOOK DECISIVE ACTION.’ The capital letters in this statement appeared in the video. It also featured selected clips of President Trump and set them to dramatic music.”

Shaub continues, “Overlaid above various images was a timeline that omitted most of the month of February — the period when critics say President Trump failed to take needed action, choosing instead to visit his golf course and hold political rallies. The video closed with clips of state governors praising President Trump for his personal role in the pandemic response.”

The video features New York Times reporter Maggie Haberman, and Shaub stresses that her statements are badly taken out of context to sound more favorable to the president than they actually were.

In his article, Shaub goes on to describe the specific federal law he believes the White House's video might have violated the law in several ways.

According to Shaub, “The Consolidated Appropriations Act, 2020 (Public Law 116-93) expressly prohibits the use of any federal appropriations — including those that pay White House salaries and expenses — for publicity or propaganda not authorized by Congress. Section 718 of the law reads, ‘No part of any appropriation contained in this or any other act shall be used directly or indirectly, including by private contractor, for publicity or propaganda purposes within the United States not heretofore authorized by Congress.’ This section applies generally to the entire government, including the White House Office.”

[The Government Accountability Office] has also held that using appropriated funds to create unauthorized publicity or propaganda not only violates the prohibition contained in the annual appropriations law but also violates the federal Antideficiency Act. That law prohibits the use of federal funds for purposes other than the purposes for which Congress appropriated them. Violations of the Antideficiency Act trigger a requirement to report the misuse of federal appropriations to Congress and, in severe cases, could lead to disciplinary action for the staff members involved or more severe penalties.

It’s also relevant that President Trump is currently running for reelection. By showing the video during an official press conference, he seemed to be trying to get worldwide coverage of something akin to a free campaign ad on multiple broad-reaching media platforms. One commentator accused him of “using the briefing room to air a campaign-style clip.” Others similarly referred to the video as a “campaign-style video clip,” a “campaign-style video” and a “campaign ad-like video.” A reporter sitting in the briefing room even confronted President Trump on this point shortly after watching the video: “Can I just ask you about the video?  Because I’ve never seen a video like that played in this room. It looks a bit like a campaign ad. Who — who produced that video for you?”

When pressed by reporters in the room, President Trump admitted that this stunning video had been created by White House staff, including Assistant to the President Dan Scavino. The funds Congress appropriated for White House salaries and resources were not intended to be used for the creation and presentation of a propaganda video touting the accomplishments of a President who is currently running for reelection. Members of Congress should demand answers from the White House, and they should request an immediate GAO opinion regarding the lawfulness of this expenditure.

Shaub became director of the U.S. Office of Government Ethics in January 2013, when Barack Obama was president. The attorney remained in that position after Trump was sworn in as president before leaving in July 2017.