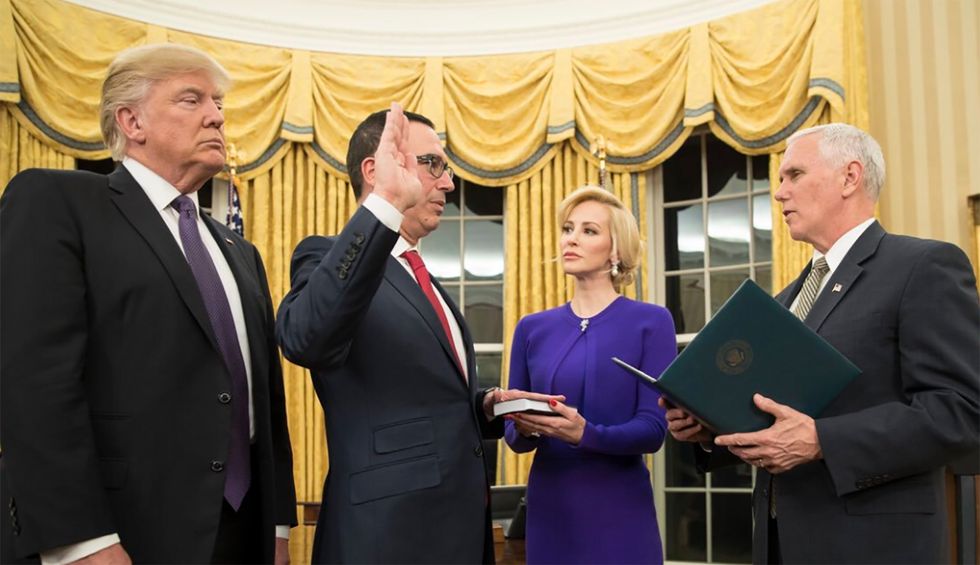 Millions of Americans are in dire need of money to afford groceries, rent, and other necessities amid the coronavirus-induced economic fallout, but the Treasury Department has officially ordered that President Donald Trump's name appear on the one-time $1,200 stimulus checks set to be mailed to 70 million people, an unprecedented move that could delay delivery of the payments for days.

The decision was finalized late Monday, the Washington Post reported Tuesday night, and it "means that when recipients open the $1,200 paper checks... 'President Donald J. Trump' will appear on the left side of the payment."

"Trump's insistence that his name appear on the checks is slowing their delivery," tweeted former Labor Secretary Robert Reich. "But he wants Americans to be appreciative—even though it was Congress's idea, it's taxpayer's money, and it's too little, too late."

Watchdog group Common Cause called the move "a disgusting use of taxpayer dollars to promote the president in an election year."

"The decision to have the paper checks bear Trump's name, in the works for weeks, according to a Treasury official, was announced early Tuesday to the IRS' information technology team," the Post reported. "The team, working from home, is now racing to implement a programming change that two senior IRS officials said will probably lead to a delay in issuing the first batch of paper checks. They are scheduled to be sent Thursday to the Bureau of the Fiscal Service for printing and issuing."

Eligible Americans who have direct deposit information on file with the IRS are set to receive the payments in their bank accounts in the coming days—assuming their banks don't seize them—and will not see the president's name.

Those without the necessary information on file with the government, a group that is disproportionately low-income, will receive a paper check in the mail. The IRS said in an internal draft plan circulated earlier this month that millions of Americans could face significant delays—in some cases up to five months—in receiving their $1,200 checks.

In a briefing earlier this month, Treasury and IRS officials told House Democrats that the stimulus checks will begin flowing steadily by May 4.

As Common Dreams reported, lawmakers and advocacy groups have been raising alarm about the Treasury Department's slow-walking of the checks—Trump signed the CARES Act, which authorized the one-time payments, on March 27. A delay of even just one or two days could have a devast

ating impact for those on the brink of financial ruin, observers warned.

What’s worse? His egomania, or the fact that his egomania could cause people to literally starve and/or lose their… https://t.co/fgqSpzHTRB
— Mehdi Hasan (@Mehdi Hasan) 1586913056.0

Erin Hatch, a spokeswoman for House Ways and Means Committee Democrats, said in an interview with the New York Times that members of Congress were not consulted about the Treasury Department's decision to add Trump's name to the checks at the urging of the president.

"Donald Trump is further delaying cash payments to millions of Americans struggling to pay the rent and put food on the table to feed his ego," Wyden said. "Only this president would try to make a pandemic and economic catastrophe all about him."

"Imagine the kind of sad, egotistical person who would turn this awful crisis into an absurd campaign stunt by demanding their name go into the memo field of a check that was approved by Congress," McGovern wrote.