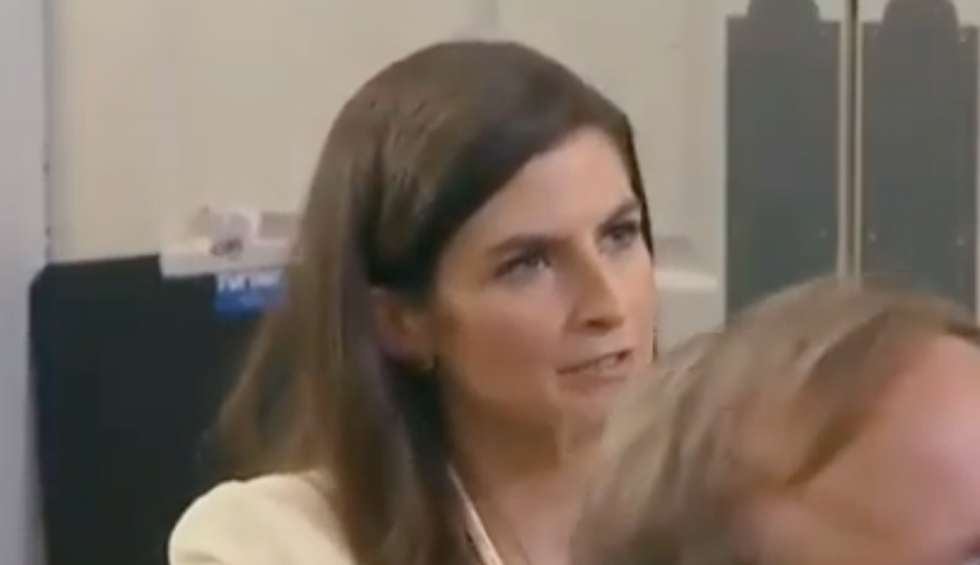 In the face of President Donald Trump's truly galling press briefing on Monday, CNN's Kaitlan Collins finally took a step so many have hoped to see from the White House press corps. She directly confronted Trump with the fact that a claim he made was plainly wrong.

Trump began claiming Monday morning on Twitter that he had the authority to lift the coronavirus shutdowns in place across the country, despite the fact that the Constitution gives him no such powers, and governors have enacted stay-at-home orders under the individual states' authorities. When a reporter pressed him to explain these comments, Trump repeated and intensified his extreme and legally baseless position.

"When somebody's the president of the United States, the authority is total," Trump said. "And that's the way it's gotta be."

"The authority's total?" the reporter asked.

"It's total. It's total," Trump replied. "And the governors know that."

When Collins got the chance to speak next, she politely informed him that his claim was flat-out incorrect.

"You said when someone is president of the United States, their authority is total," she said. "That is not true. Who told you that?"

"You know what we're going to do?" Trump replied, not answering the question. "We're going to write up papers on this. It's not going to be necessary. Because the governors need us one way or the other. Because ultimately, it comes with the federal government. That being said, we're getting along very well with the governors. And I feel very certain that there won't' be a problem."

It wasn't entirely clear what Trump meant in these remarks, but he made it clear he wasn't backing down from his bald assertion of king-like powers.

"Has any governor agreed that you have the authority to decide when their state opens back up?" Collins pressed further.

"I haven't asked anybody. You know why? Because I don't have to," Trump said.

"But who told you that the president has the total authority?" she asked again.

Many observers pointed out that, had a Democratic president claimed to have "total authority" — in general, or with regard to telling governors what to do — right-wing media would have been up in arms. But when it's Trump, conservative media completely swallows his absurd claims whole and without complaint.

This is not the first time Trump has spoken this way about presidential powers. Last July, Trump ridiculously claimed: "I have an Article 2, where I have the right to do whatever I want as president."

—@kaitlancollins to Trump: "You said when someone is President of the United States, their authority is total. That… https://t.co/sO0TNhMIfm
— Oliver Darcy (@Oliver Darcy) 1586819351.0