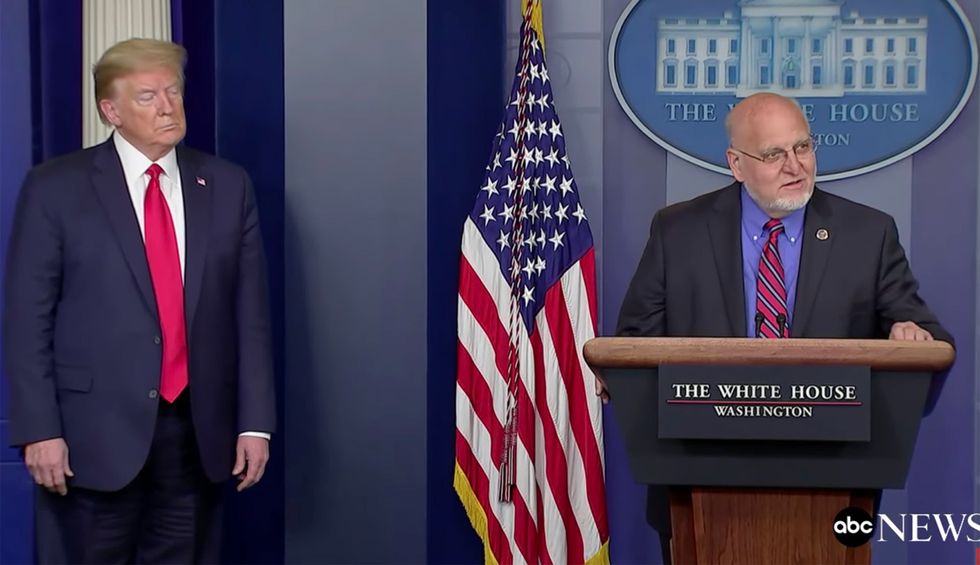 At his nightly White House press conference on Wednesday, April 22, President Donald Trump was hoping that the three health officials he had with him — Dr. Robert Redfield of the Centers for Disease Control and Prevention (CDC), Dr. Anthony Fauci and Dr. Deborah Birx — would join him in downplaying the possibility that a second coronavirus wave could occur in the fall. But things did not go as Trump had hoped, and none of the health officials entertained that possibility.

The Spanish flu pandemic of 1918 included a first wave that was deadly and a second wave during the fall that was much worse, and Redfield recently warned that history could repeat itself with the coronavirus pandemic — that a second wave in the fall could likely be even worse than all the death and suffering that is happening now. But Trump, during the Wednesday press conference, claimed that coronavirus might “go away” and not return with a vengeance in the fall — and that Redfield was misquoted in a Washington Post article published the day before on April 21.

Redfield, however, refused to join Trump in his claim that the Post was reporting “fake news” and told reporters, “I’m accurately quoted in the Washington Post.” And Redfield didn’t back down from his warning that this fall and the 2020/2021 winter could be even deadlier than what it occurring now.

Reporters wanted to know why Trump was expressing confidence that coronavirus wouldn’t return in the fall when his own health experts were predicting that it would, and Trump clearly resented their questions. Trump claimed that “what we’ve just gone through, we will not go through” this fall or in the late 2020/early 2021 winter. But Fauci refused to follow Trump down that rabbit hole, stressing to reporters, “We will have coronavirus in the fall. I am convinced of that.”

The morning after the press conference, MSNBC’s Joe Scarborough (a former GOP congressman and outspoken Never Trump conservative) vehemently slammed Trump for unsuccessfully trying to get his own health officials to join him in non-scientific claims. Scarborough humorously told fellow “Morning Joe” host Mika Brzezinski that Trump’s comments were so frustrating that in order to calm his nerves, he had to go on a Wednesday night Rolling Stones binge (Scarborough specifically mentioned the Stones’ classic Exile on Main Street album of the early 1970s).

Scarborough asserted, “(Trump’s) gut feeling is that (coronavirus) is not going to come back in the fall…. But the flu pandemic of 1918 was actually stronger in the fall….. He still doesn’t get it.”