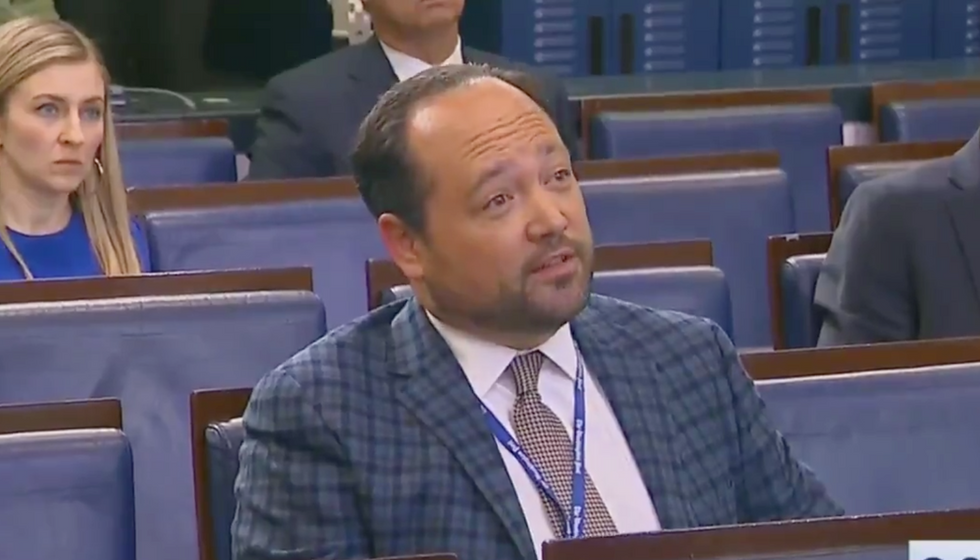 Washington Post reporter Phil Rucker took a welcome stand against President Donald Trump on Thursday by calling him out for spreading baseless — and frankly, extremely dangerous — rumors during the day's coronavirus press briefing.

Trump's briefings have long outlived any usefulness, as he frequently turns them into a stage to launch attacks on the press or promote the businesses of his friends. Most egregiously, he often spreads false and misleading information about the ongoing pandemic, some of it dangerous to the health of Americans. But on Thursday, he took the danger to a new level. While he has previously advocated the unproven drug hydroxychloroquine for treating COVID-19 despite his own health experts' cautions, on Thursday he launched into a bizarre list of frankly delusional ideas for treating the disease, some of which are clearly hazardous to human health.

He suggested ultraviolet light, applied to the body (perhaps internally?) might help treat the disease. And then, even more preposterously, he suggested that a disinfectant could be used to treat the disease, perhaps by "injection" or through some method that "gets in the lungs." There is, of course, no basis for this, and it's completely irresponsible for him to make such baseless suggestions on national TV. He indicated that experts should "check" his suggestions and that "you're going to have to use medical doctors," but there's no telling who might take his wild and boundless speculation seriously and try to self-medicate. In fact, it seems this already happened with deadly consequences following the president's advocacy of hydroxychloroquine.

Dr. Deborah Birx, the White House's Coronavirus Response Coordinator, had to explain to him that the idea that light or heat could be used as a treatment wasn't based on anything.

"I think that's a good thing to look at," Trump responded.

The White House press corps has sat through many of these briefings filled with lie after lie — many of which go unchallenged, if for no other reason than that there's not enough time to fact-check them all. But on Thursday, the Washington Post's Phil Rucker stood up to Trump's irresponsible suppositions.

"Respectfully, sir, you're the president. And people tuning in to these briefings want to get, they want to get information and guidance and want to know what to do," Rucker said. "They're not looking for rumor."

The president was clearly indignant to be confronted with this completely reasonable point.