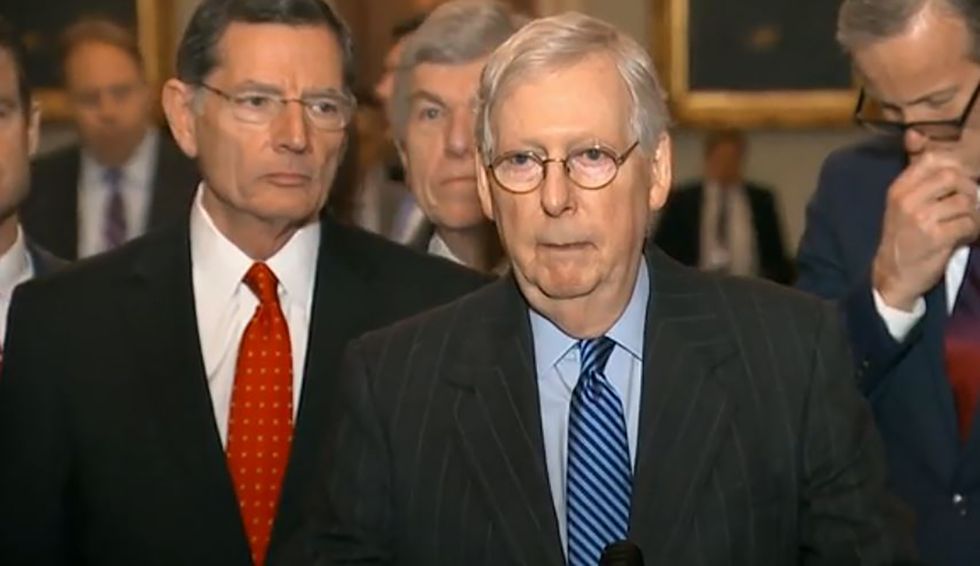 Please do not give congressional Republicans credit for standing up for the United States Constitution. Actions speak louder than words. If they believed what they say about limited government, checks and balances, the separation of powers, and the rest, every one of them would have voted to impeach, convict and remove the president. All but two kissed Donald Trump’s gold ring. (All but one, in fact, Mitt Romney; Justin Amash, a representative from Michigan, is now a Republican-turned-Independent.)

Liz Cheney, a representative from Wyoming, corrected Trump by way of Twitter this morning. She said he was wrong to say, as he did yesterday, that he has total authority as the president. She then proceeded to quote the 10th Amendment, which says any powers not delegated to the United States are reserved to the states “or to the people.” Some might ask if she’s finally seen the light. Answer: nah. Cheney had her chance to show loyalty to the Constitution. She had it. She failed. There’s no going back now.

This should be a familiar song-and-dance. When a Democrat resides in the White House, the Republicans become “constitutional warriors,” proclaiming themselves to be “constitutional conservatives” defending a “constitutional republic” from all manner of “government tyranny,” even if that means turning down free federal dollars to expand access to health care, all in the name of states rights and sovereignty.

If a Republican president accidentally reveals the charade—or if he willfully commits treason by extorting a foreign nation into sabotaging our elections—well, that’s not occasion for prosecuting to the fullest extent of the law and Constitution. That’s occasion for throwing all that away, then pretending to have done no such thing. The GOP sings hosannas to limited government, checks and balances, the separation of powers while allowing a GOP president to run those principles down.

I suspect that the Republicans’ mode of betrayal—of their own conservative principles and of their fellow Americans—was never entirely clear until the start of the Trump administration. I suspect that many, though not most, Democrats and independents were still able to give conservatives the benefit of the doubt when they said they opposed, say, the expansion of the Affordable Care Act on grounds that it violated states rights and sovereignty. And even if they didn’t give conservatives the benefit of the doubt, what did it matter? Red states are red. Blue states are blue. Who cares?

I suspect that changed in 2017 when Trump and the Republicans raised taxes on rich blues states while cutting taxes for the very rich and very large corporations. Rich blue states had already been sending more in money to Washington than they were getting in return. Now Republicans were making it so rich blue states were subsidizing poor red states even more. (The mechanism was capping deductions for state and local taxes.) The tax law not only revealed Republican betrayal of their own principles; it revealed the Republican “soft civil war” against a majority of the American people.

Most people in this country live and work on the coasts or in cities—areas where state and local taxes are higher than average to maintain a standard of living electorates in those areas demand from their respective governments. These are the same places feeling the brunt of the new coronavirus pandemic, places that no longer feel they can turn to the president for help in fighting a disease that has killed more than 23,500 people in a little over a month. Majorities of Americans now see that neither the president nor his party can be trusted, because when trusted, people end up dead.

And broke. After passing a $2 trillion stimulus package, $500 billion of which was set aside as a corporate slush fund, the Republicans insisted not one dollar can be used by cities and states to make up for economic activity lost in the pandemic. According to the Post, every city surveyed, large and small, is going to run budget shortfalls caused directly by the cost of fighting the pandemic, leading to layoffs of school teachers, firefighters, police officers, and other public servants. This is so injurious and humiliating to the 93 million people who live in cities that a government official refused to be named when confirming this facet of the law to the Post: “A senior Treasury official, speaking on condition of anonymity to discuss the planning, confirmed Monday the dollars ‘cannot be used to cover general budget shortfalls.’”

It’s one thing to see thousands die due to a president’s gross criminal negligence. It’s another to have to pay for all those deaths and keep paying. That might be enough for states with a majority of Americans in them to start thinking about doing their own thing in their own ways; enough for states like California, Oregon and Washington to form their own pacts in a concerted effort to return life to normal; and enough for states in the Northeast, led by New York Governor Andrew Cuomo, to follow suit.

A civil war is soft as long as one side doesn’t recognize what’s going on.

That’s changing. And that’s the last thing the Republicans want.