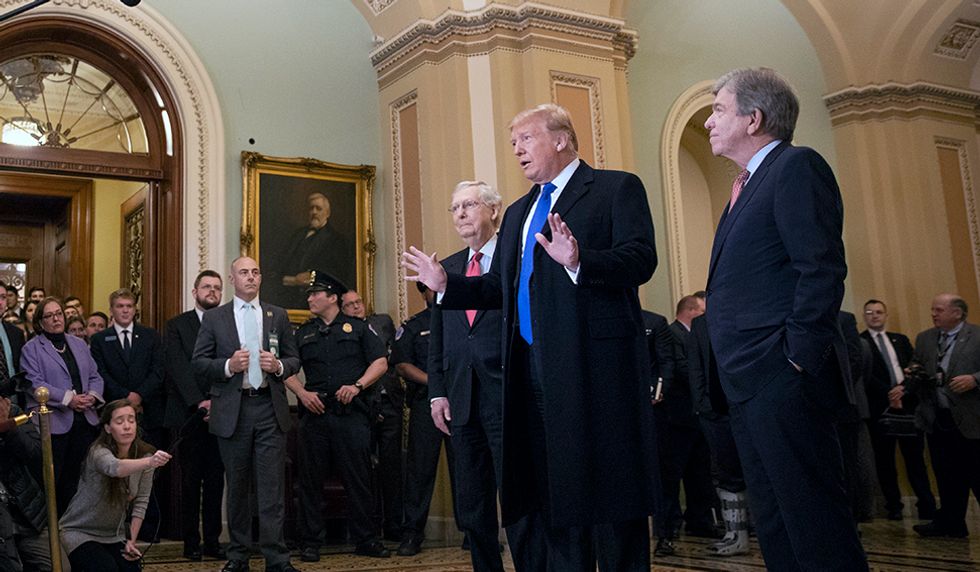 Ahead of a vote that could take place in the Senate as soon as Monday evening, civil liberties groups and federal lawmakers critical of mass surveillance spoke out against House-approved legislation that would reauthorize "abusive" and "dangerous" U.S. government spying powers that expired Sunday.

"If McConnell's push through the Senate succeeds, it would renew the government's power to warrantlessly acquire billions of data points on every person in the United States."

The Democrat-held House was widely criticized last week for passing the USA FREEDOM Reauthorization Act (H.R. 6172), a bipartisan compromise negotiated by leaders in the lower chamber that includes the reauthorization of Section 215 powers that Congress established under the USA PATRIOT Act in 2001, which federal agencies have used to justify the collection of Americans' phone records.

Democratic presidential candidate Sen. Bernie Sanders (I-Vt.), a longtime critic of government spying powers, took to Twitter Monday to speak out against the new bill and note that there is opposition on both sides of the aisle:

Sandra Fulton, government relations director for Free Press Action, wrote for Common Dreams Monday that "opposition to this legislation is gaining momentum, which is why McConnell is pushing so aggressively for a vote today while so much of the nation is focused on the coronavirus crisis."

While the bill makes some minor reforms, they are insufficient. The USA FREEDOM Reauthorization Act fails to put in place stronger reforms favored by privacy, racial-justice, and civil-liberty advocates, most of whom support an alternative bill, the Safeguarding Americans' Private Records Act, introduced earlier this year with bipartisan support.

Get our best delivered to your inbox.

Where reforms are incorporated into the reauthorization act, they are primarily half-measures that leave huge loopholes that can be easily exploited by spying agencies. The bill includes symbolic provisions specifically tailored to address issues raised by the surveillance of [President Donald] Trump aide Carter Page, it bizarrely fails to extend those protections to everyone else living in America. And while the bill prevents the government from collecting location information without a warrant, it leaves other highly sensitive information, like internet browsing and search history, vulnerable to invasive government spying without a warrant.

Fulton argued that "it's unthinkable to extend these spying powers to the same agencies that have so often sidestepped safeguards and ignored Americans' fundamental privacy rights," and urged voters to demand broader reforms and restrictions on U.S. government surveillance authority, especially given that Trump is in the White House.

"If McConnell's push through the Senate succeeds, it would renew the government's power to warrantlessly acquire billions of data points on every person in the United States," she warned. "These are terrifying powers to hand to President Trump, considering his record of surveilling and abusing marginalized communities—but as we've seen, even some of the president's supporters have complained that these overbroad powers were used against the Trump campaign, too."

Digital rights group Fight for the Future encouraged voters—particularly those who may be stuck at home due to widespread school and business closures resulting from the COVID-19 outbreak—to contact their senators and encourage them to reject the "dangerous" reauthorization legislation.

The non-profit Arab American Institute highlighted some details of the legislation in a series of tweets Monday, concluding that it "does not adequately address the constitutional shortcomings of granting sweeping surveillance authorities to the federal government." Calling for further debate and reform, the group urged the upper chamber to reject the bill.