We are all just collateral damage in Trump's re-election strategy 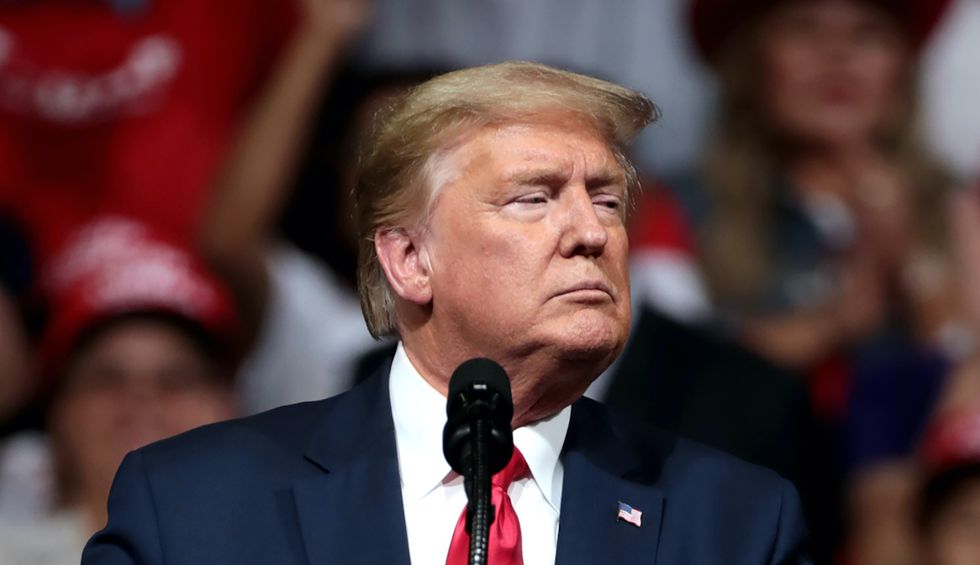 This country has had some truly bad people as president over its history. Andrew Johnson was a racist. Warren G. Harding was plagued by scandal. Richard Nixon was a criminal, a racist and an anti-Semite.

But there has never been a president in American history who based his re-election strategy on a cynical gamble involving the lives of the entire American population. We have never before experienced a president who deliberately, voluntarily chose to assume the role of a threat, rather than an ally and protector, to the American public. Not just a threat to those who might oppose him, but an existential  threat to all. Tragically, that is exactly Donald Trump’s strategy to preserve his political power in the face of this pandemic. He has chosen to gamble the lives of ordinary Americans facing potentially the most dire public health crisis in the nation’s history, in hopes of securing his own re-election.

We are already seeing the strategy play out. Charlie Warzel, writing for The New York Times, shows us the outlines as it begins to take shape.

First, it’s important to understand the two choices that were available to Trump when this crisis began.

Donald Trump’s re-election strategy had two potential paths this week. The first path would save millions of jobs, turn Trump into a populist hero for many and perhaps prevent another depression. The second path would court chaos, playing up the partisan divide, deflecting all blame for the coronavirus pandemic onto the media, China and the Obama White House, and praying that it ends up being enough to obscure his administration’s disastrous lack of preparation.

Trump chose the second path because that is the path that has been successful for him during his entire tenure as president. A leader who was actually concerned about the fate of Americans would not have waited two months to treat the coronavirus pandemic with the deadly seriousness it warrants. Nor would such a leader, in light of the infections now sweeping exponentially throughout the country, be encouraging American workers that an immediate return to work was in their best interests. As Warzel notes, “Knowingly putting workers into harm’s way to move the market is both unthinkably cruel and wildly misguided, even from an economic perspective.”

But not from a political perspective. Trump’s actions up to this point bespeak a cold, political calculation, one that Trump clearly believes is viable in these polarized times. The calculation is not particularly complex. It is that the number of Americans who die as a result of his policy will be outweighed by the polarized sentiments of the electorate, come Election Day.

That is why, when the seriousness of the pandemic became impossible to ignore, the first thing the administration chose to do was create a focus for his supporters to place blame. The racist “Chinese virus” tactic was deliberate with a view towards generating controversy in the media, and thus to distract from the very real fact of Trump’s own negligence.

News cycles about the administration’s trollish language compete for airtime with reporting around the administration’s slow and costly response to the coronavirus — one that’s left millions of citizens and health care workers vulnerable. In pro-Trump circles, the conversation focuses on a deranged media that’s more obsessed with political correctness than a pandemic.

Trump’s continued attacks on governors from Democratic states and the protective measures they are implementing—actually threatening to withhold aid from certain states whose governors weren’t “nice” enough to him—follows the same pattern: to set up a ready scapegoat for his base.

Mr. Trump’s desire to end social distancing follows a similar pattern. The president’s short attention span, thin skin and obsession with the Dow Jones industrial average all lead him to push for a reopened economy. Only the president doesn’t have that power — states do. And most states are likely to continue urging their residents to stay home. So he’ll blame the media and Democratic governors for the economic fallout. Here’s where the faulty American bailout helps the president in the most sinister way: Workers left without adequate protections could suffer more under a mass quarantine and might be more likely to resent medical experts and a mass media urging for social distancing. Mr. Trump can rail against the states’ decision to extend the quarantine and pretend, insincerely, to side with workers over the elites. After all, many of them can comfortably work from home and keep their jobs, he might argue.

As Warzel notes, this provides Trump with a potential win-win situation: If states’ efforts are successful and the pandemic is thwarted or diminished, Trump can claim victory for his “national strategy.” If the pandemic does not spread to more rural areas, Trump can also claim that Democrats overreacted and cost the country economic harm that could have been avoided.

We see the stark disparity between the actions of several “red” state governors and those of “blue” states already playing to this strategy. For the moment, red state governors in solidly Trump-voting states like Alabama, Mississippi, Texas, and Tennessee are following the Trump playbook. Meanwhile, Trump continues to rally his base with his thinly-disguised propaganda “briefings,” in which he surrounds himself with health professionals and continues his attacks on those governors who criticize or ignore his pronouncements. In this way he can stay in a perpetual campaign mode.

The fact that this strategy ignores the potential toll of human lives and suffering in those states that have chosen to follow Trump’s lead is of absolutely zero significance to the administration. The fact that people in those states, convinced by Trump that the pandemic is overblown, are nonetheless likely to infect others who do take such precautions is also of zero significance. And the fact that this strategy flies in the face of all the scientific research promoted by the public health authorities, including Trump’s own CDC, is also of no moment. That is what makes Trump’s actions here so striking and unique— American lives are simply removed from the equation, in favor of political expediency, that is, Trump’s re-election prospects. Trump has intentionally chosen to make us all his pawns, to the extent that he has the power—and the bully pulpit—to do so.

Trump is simply counting on the profoundly hyper-partisan divide in this country to be more significant and powerful than the actual body count caused by his strategy. He is counting on Fox News, and Sean Hannity, Laura Ingraham, and the billionaire set who have all come out in favor of Americans “getting back to work” as soon as possible. He is expecting that the stimulus just passed by the Congress, which he signed, will not do enough, and he is attempting to channel the anger and rage that he believes will follow, towards those who counseled caution. And more than anything, he’s counting on his base to remain loyal and credulous throughout.

Never before has any American president exhibited such wanton, callous disregard for the lives of American citizens. But Warzel isn’t sure that treating Americans as “collateral damage” in such a strategy is going to play out the way Trump hopes.

Under normal circumstances, this tactic seems to work for the president. But these are not normal times. Though public opinion around the virus is still starkly divided by party, there’s evidence to suggest that gap is narrowing and could shrink substantially as the spread of infection peaks across the country. Faced with an exponentially multiplying threat, the president has chosen to flirt with disaster rather than avoid it. It’s a strategy with a high risk of collateral damage — namely, us.

One thing is certain—Trump is constitutionally incapable of admitting mistakes. As he was mentored by the despicable and infamous red-baiter, Roy Cohn, he can always be counted on to double-down, even in the face of egregious missteps. He will continue on this path no matter who dies as a result. So we are all going to see Trump’s strategy playing out in real time, day by day, as the death toll increases.