Was Fox News’ Jeanine Pirro drinking before her Saturday night show? The internet sure thinks so 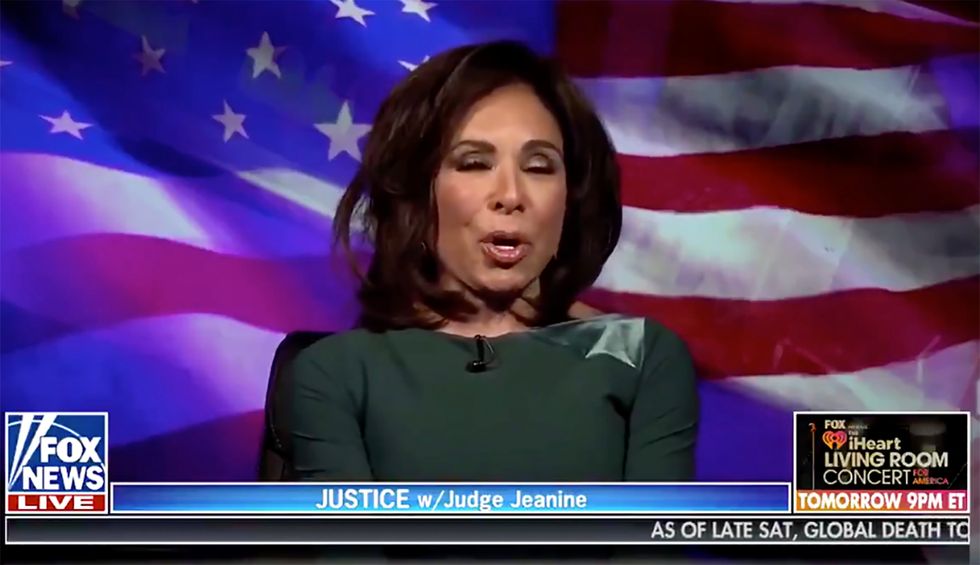 Moments after clips if the opening of Jeanine Pirro’s regular Saturday night show on Fox News were posted online, Twitter commenters were speculating that the former prosecutor may have been drinking, likely due to her demeanor and slightly disheveled look.

After her “Justice with Judge Jeanine” show was delayed due to “technical difficulties” for 15 minutes, the host appeared and apologized for the delay before she began to discuss Donald Trump’s plan to take the U.S. out of quarantine by Easter, telling viewers, “Just the other … day the president talked, or was hoping, about the possibility of reopening everything on Easter Sunday, uh, in a way where we could kind of come out of this quarantine, as loose as it may be, that we’re involved in.”

Commenters were quick to point that that she didn’t seem her normal self and that her hair was rumpled, which led to speculation that she might have had a drink or two before her appearance.

You can watch clips below as well as what commenters on Twitter were saying.

Judge Jeanine missed the first segment of her show tonight because of “technical difficulties” and then hosted the… https://t.co/9WP0facozO
— Aaron Rupar (@Aaron Rupar)1585448146.0

@atrupar Folks, Jeanine Pirro was drunk AF tonight...either that or she swallowed some pills chased by a shot of vo… https://t.co/iwCNPMIuJI
— Russell Drew (@Russell Drew)1585451819.0

I can’t stand Judge Jeanine Pirro; however, if she’s drunk and has a serious drinking problem then I want her to get help. @JudgeJeanine
— Chris (@Chris)1585452608.0

I did not buy enough alcohol before quarantine. What I would give to be as drunk as Judge Jeanine Pirro tonight
— Jessica Leigh (@Jessica Leigh)1585457302.0

At one point a heavily inebriated Judge Jeanine is slowly nodding off while her guest talks. A quick-thinking produ… https://t.co/FIImJrF1Qa
— John Teti (@John Teti)1585453587.0

Anyone who thinks that Cecily Strong's impression of Jeanine Pirro on #SNL is exaggerated should watch this clip.… https://t.co/wdmnFxQZtt
— SNL Nerds (@SNL Nerds)1585479117.0

“Jeanine Pirro was broadcasting from her home for the first time when she encountered several technical difficulties which impacted the quality of her show, including the loss of a teleprompter," the spokesperson said. "As we have previously said, we are operating with a reduced staff working remotely to ensure the health and safety of our employees in these unprecedented times.”