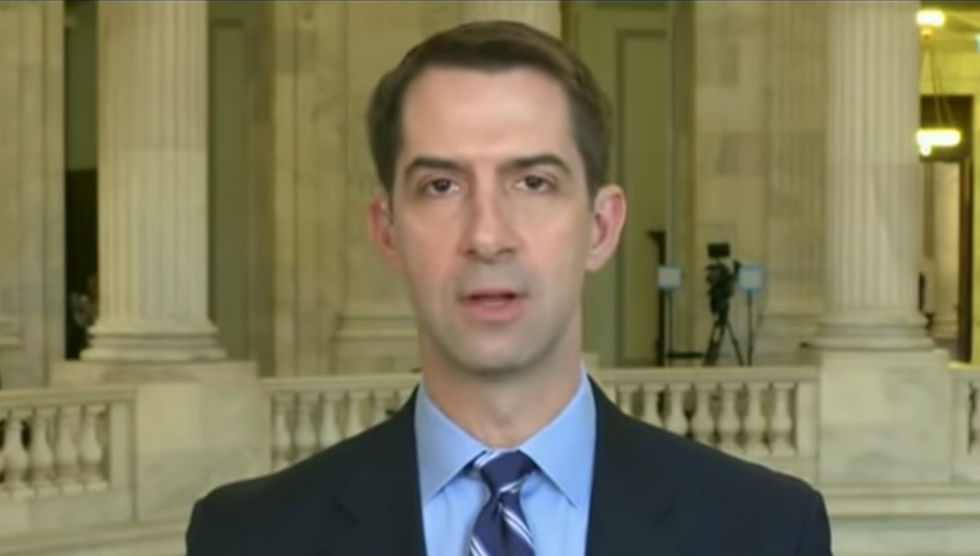 Hawkish Sen. Tom Cotton issued a menacing statement on Thursday vowing that the United States "will hold accountable those who inflicted" the coronavirus on the world, seeming to suggest that the Chinese government is behind the pandemic.

"The Wuhan coronavirus is a grave challenge to our great nation," said Cotton, who announced he is temporarily closing his Washington, D.C. office as a precautionary measure. "We are a great people. We rise to every challenge, we vanquish every foe, and we come through adversity even better than before."

In a tweet, the Arkansas Republican left no doubt that his statement was directed at China:

Critics slammed Cotton for exploiting the deadly pandemic to beat the drums of war as the U.S. struggles to contain the COVID-19 outbreak.

"When all you have is a hammer and you're also a moron, every problem is a nail and you keep hitting your own fingers," tweeted Jamal Abdi, president of the National Iranian American Council.

Cotton's statement Thursday was not the first time the senator has indulged in conspiracy theories related to the origins of the novel coronavirus, which has infected more than 130,000 people and killed nearly 5,000 worldwide.

In a Feb. 17 appearance on Fox News, Cotton parroted the unfounded claim that coronavirus may have emerged from a biochemical lab in Wuhan, China, the epicenter of the outbreak.

"We don't know where it originated, and we have to get to the bottom of that," Cotton said. "We also know that just a few miles away from that food market is China's only biosafety level 4 super laboratory that researches human infectious diseases."

Cotton went on to acknowledge that there is "no evidence" the virus originated in the Wuhan lab.

Richard Ebright, a professor of chemical biology at Rutgers University, told the Washington Post last month that "there's absolutely nothing in the genome sequence of this virus that indicates the virus was engineered."

"The possibility this was a deliberately released bioweapon can be firmly excluded," said Ebright.