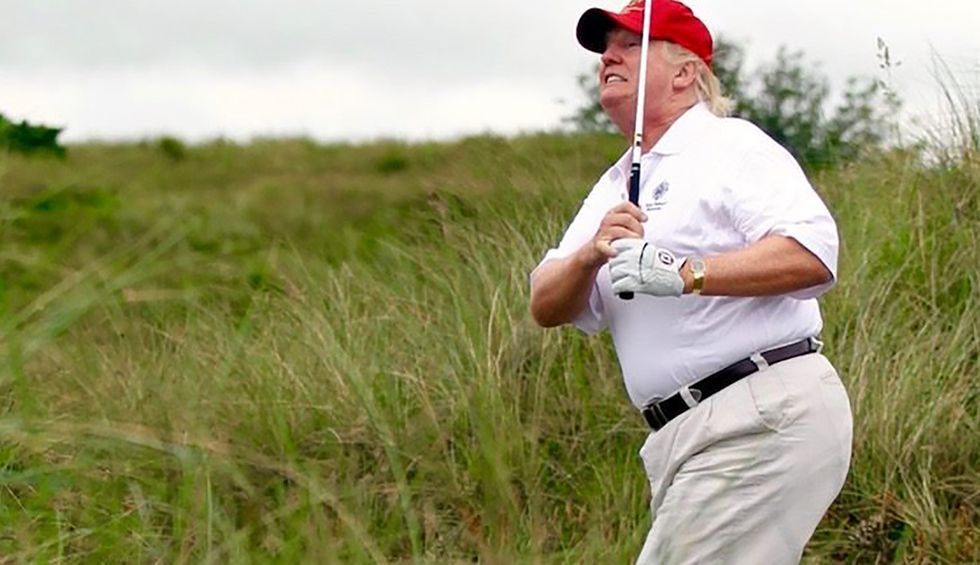 During a ten-minute coronavirus-related speech from the Oval Office on Wednesday night, March 11, President Donald Trump announced that a month-long European travel ban would be going into effect: residents of 26 European countries will not be allowed to entered the United States. The U.K., however, is exempt from the ban, and Politico’s Ryan Heath notes that the ban excludes nations “where three Trump-owned golf resorts are located.”

The 26 countries affected by the travel ban, Heath explains, are located in “a visa-free travel zone known as the Schengen Area.”

During his Wednesday-night speech, Trump tried to blame Continental Europe, in part, for the spread of coronavirus. Many pundits and Trump critics, including Joe Scarborough and Rachel Maddow, have found the exemption for the U.K. to be peculiar — as some countries in Continental Europe have had fewer deaths from coronavirus than the U.K., which consists of four different countries: England, Wales, Scotland and Northern Ireland (the Republic of Ireland is a separate country from Northern Ireland and is not part of the U.K.).

The Trump Administration, discussing the European travel ban, asserted, “The Schengen Area has exported 201 covid-19 cases to 53 countries. Moreover, the free flow of people between the Schengen Area countries makes the task of managing the spread of the virus difficult.”

Residents of the 26 Schengen countries affected by the ban will not be allowed to fly directly to the U.S. while the ban is in effect. But as Heath notes, there is a way around that — albeit an inconvenient one.

“Residents of the 26 Schengen Area countries are also free to live and work in the United Kingdom, meaning they could fly to the United States from a British airport as long as they hadn’t spent time within the Schengen countries in the last 14 days.”

European Commission President Ursula von der Leyen and European Council President Charles Michel have been highly critical of Trump’s decision. In a joint statement, they asserted, “The Coronavirus is a global crisis, not limited to any continent — and it requires cooperation rather than unilateral action. The European Union disapproves of the fact that the U.S. decision to impose a travel ban was taken unilaterally and without consultation.”