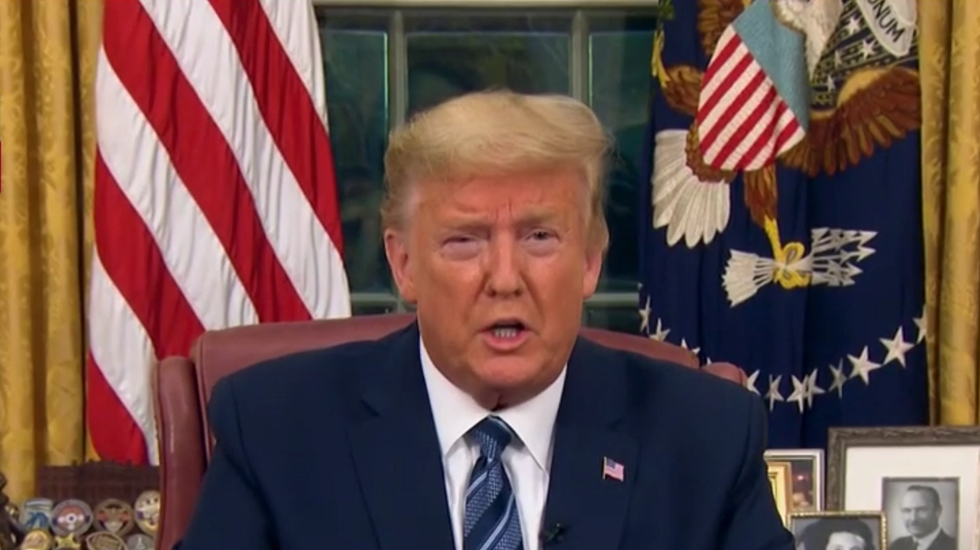 In a rare Oval Office address on Wednesday night, President Donald Trump announced that he would be barring travel from Europe to the United States beginning on Friday to try to quell the spread of the coronavirus. It was a transparent attempt to downplay the severity of the outbreak in the United States — which has already spread widely across the country — and pin the blame on foreigners.

"We will be suspending all travel from Europe to the United States for the next 30 days," he said, saying the ban will start Friday night. "These restrictions will also not apply to the United Kingdom."

His speech and affect seemed belabored and subdued throughout his address, and his voice was gravelly.

It's not clear why the UK was exempted from the ban. Trump said that Americans abroad may be permitted to come back to the United States when they have "undergone appropriate screenings."

Trump claimed that his "early, intense action" in fighting the virus led to "fewer cases of the virus in the United States than Europe." But this claim is highly misleading. While the outbreak in parts of Europe, particularly Italy, has been severe, the Trump administration has failed to provide adequate testing for the virus. More than 1,200 cases have been reported in the United States, but many more people are certain to be infected with the virus without being diagnosed. Experts believe the number is only expected to grow, especially if prudent measures to reduce infections aren't adopted.

And because the virus is already spreading in the United States, it's not clear what if any good the ban on travel from Europe will do. It is most likely a PR gesture meant to make Trump look decisive, rather than a considered public health policy.

Trump blamed Europe for not doing enough to stop what he called a "foreign virus," even though his own administration has completely botched its response to the crisis thus far. He claimed that European travelers "seeded" the virus in the United States, though he cited no evidence for this claim. Public health experts believed that it was practically inevitable that the virus would eventually come to the United States.

Trump did, correctly, say that elderly people are most at risk, that basic hygiene measures can reduce the spread of the disease, and that "social distancing" measures — avoiding unnecessary contact with others or gatherings — may be necessary. But these remarks were clearly an afterthought to his focus on travel from Europe, and they did not convey the scope of social disruption that the virus is likely to have on American society.