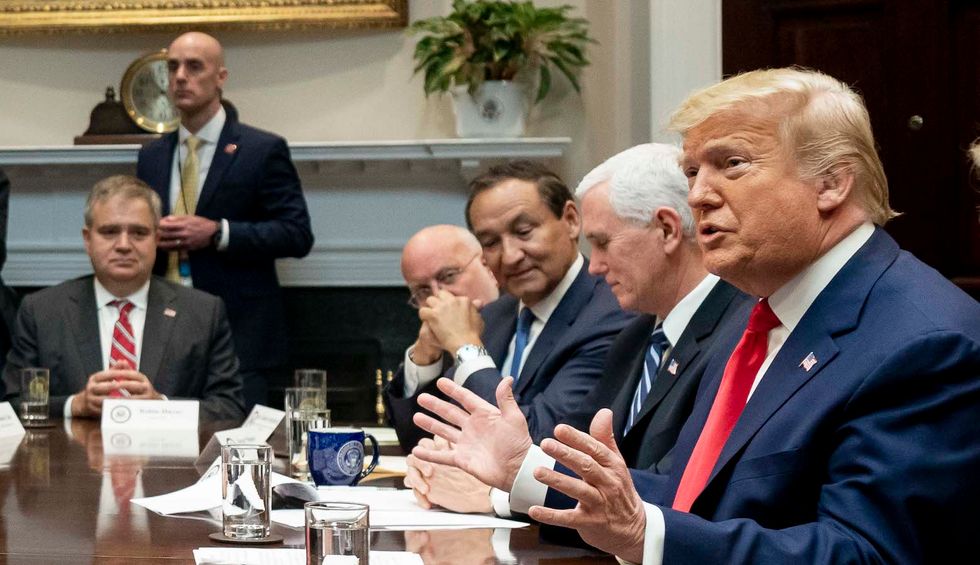 If President Donald Trump can find a way to blame his predecessor, former President Barack Obama, for something, he likely will — including coronavirus.

At a news conference on Wednesday, Trump told reporters, “The Obama Administration made a decision on testing that turned out to be very detrimental to what we're doing, and we undid that decision a few days ago so that testing can take place in a much more accurate and rapid fashion.”

A reporter later asked Trump to clarify what he meant by an “Obama-era rule that you had changed regarding this virus. I didn’t follow that.” And when Trump and Vice President Mike Pence responded to the reporter, there was still a lack of clarity.

Trump on coronavirus testing: "The Obama administration made a decision on testing that turned out to be very detri… https://t.co/dC3optnUmF
— Aaron Rupar (@Aaron Rupar)1583340070.0

Trump referred the question to Pence, who told the reporter, “The last administration asserted FDA jurisdiction over testing, and the development of tests like this. The president changed that on Saturday.”

The vice president continued, “As I spoke to several governors this morning, the states now have the ability to actually conduct the coronavirus test in state labs, university laboratories. And that’s because of the change the president authorized.”

REPORTER: What was this Obama-era rule that you are blaming for the coronavirus testing problems? PENCE: "The last… https://t.co/aUUd67hx7P
— Aaron Rupar (@Aaron Rupar)1583340829.0

Twitter users were equally puzzled following Trump and Pence’s statements. But the New York Times gave some background on what the president seemed to be referring to:

No coronavirus issue has attracted as much attention as testing, which even now has lagged behind other countries dealing with the virus. Local health agencies have complained that a lack of coronavirus tests have hindered their abilities to identify patients, and tight restrictions imposed by the Centers for Disease Control and Prevention on who could be tested have meant that some infected patients waited days before a diagnosis.

[Trump] appeared to be referring to a regulation that limited the ability of laboratories run by states, universities and private companies to conduct medical screenings not approved by the Food and Drug Administration. On Saturday, the F.D.A. commissioner, Stephen M. Hahn, allowed those labs to use tests they independently developed after submitting evidence that they work before the F.D.A. completes its review.

Under fire for his handling of the outbreak, Mr. Trump appeared eager to focus attention on the Obama administration, making a point of using the former president’s name in his comments to reporters. He did not explain why his administration did not change the rule during his first three years in office or before this past weekend, two months into the outbreak.

CNN later reported that an aide to a Republican senator and a lab association denied Trump claims about an Obama-era rule entirely:

A policy expert at the Association of Public Health Laboratories agreed with Haulsee's assessment.

When asked about Trump's remarks, Peter Kyriacopolous, chief policy officer at the association, said: "We aren't sure what rule is being referenced."