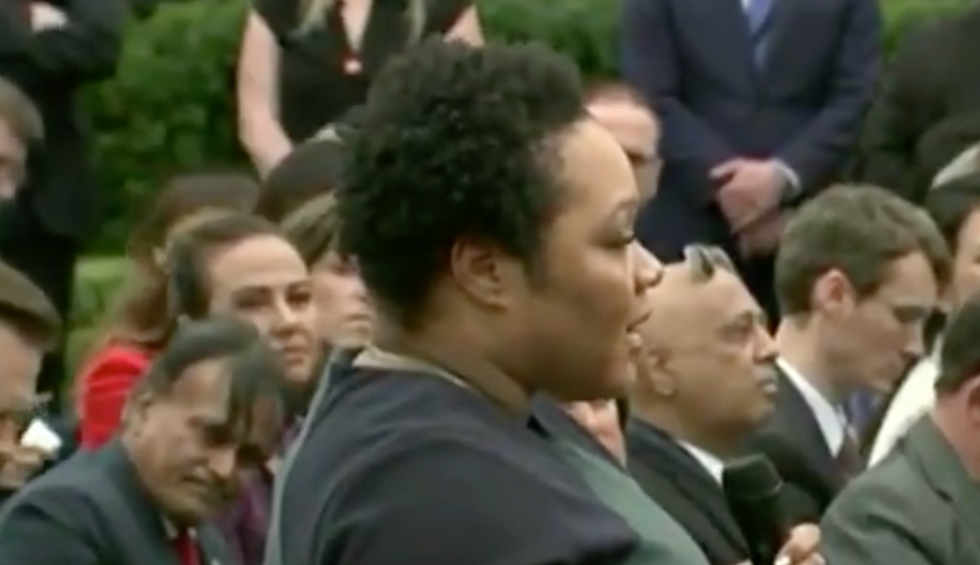 On Monday, he lashed out at her for pointing out that the United States' coronavirus testing regime is lagging behind that of other nations, such as South Korea, on a per capita basis.

He immediately became defensive, saying that the United States is much less dense than South Korea. He pushed her to see if she knew the size of the population of Seoul, the country's capital. He falsely claimed that its population was 38 million, when in fact, it's under 10 million. (Some pointed out that he might have gotten this fact wrong because Wikipedia lists the city's elevation as "38 m.")

He then attacked her for asking the question at all: "You should be saying congratulations instead of asking a really snarky question, because I know exactly what you mean by that."

It's not the first time Trump has tried to humiliate Alcindor before a national audience. Just the day before, Trump lashed out at her when she confronted him with the fact that he had said states were asking for equipment to fight Covid-19 that he didn't think they needed.  Trump said he didn't make this claim, even though she provided a direct quote from his recent interview with Fox News' Sean Hannity.

“Be nice," Trump told her. "Don't be threatening.”

She hadn't been threatening at all.

A few weeks ago, she asked him about criticism he has faced for disbanding the National Security Council's pandemic office.

"I just think it's a nasty question," he sneered. He falsely claimed that he didn't do it.

Of course, Alcindor isn't the only reporter Trump is rude and abrasive toward. Just last week, Trump insulted NBC News' Peter Alexander, calling him a "terrible reporter" after a softball question seeking comforting words for a scared country.

But few reporters seem to stir Trump's ire as frequently as Alcindor. It's notable because, while she does ask tough, fact-based questions, she is extremely polite as soft-spoken. She never gets angry or raises her voice back in response, even as she handles Trump's verbal abuse. In a tweet, she suggested her treatment by the president may be a function of her race, gender, and role as a reporter:

President Trump today at the White House said to me: “Be nice. Don't be threatening.” I’m not the first human bein… https://t.co/TWbMYNzfz4
— Yamiche Alcindor (@Yamiche Alcindor) 1585526158.0

Speaking with Pod Save America's Jon Lovett about the treatment, she explained: "The reason why I became a journalist is because Emmett Till, this 14-year-old boy in Mississippi, was killed. And it sparked the Civil Rights Movement. And I am at my heart a civil rights journalist. And I'm at my heart someone who is constantly thinking: We don't have time for foolishness. We don't have time for sideshows. The reason why I'm a reporter is because I really believe vulnerable people in this country don't have a voice. And I think about them every day as I craft my question."