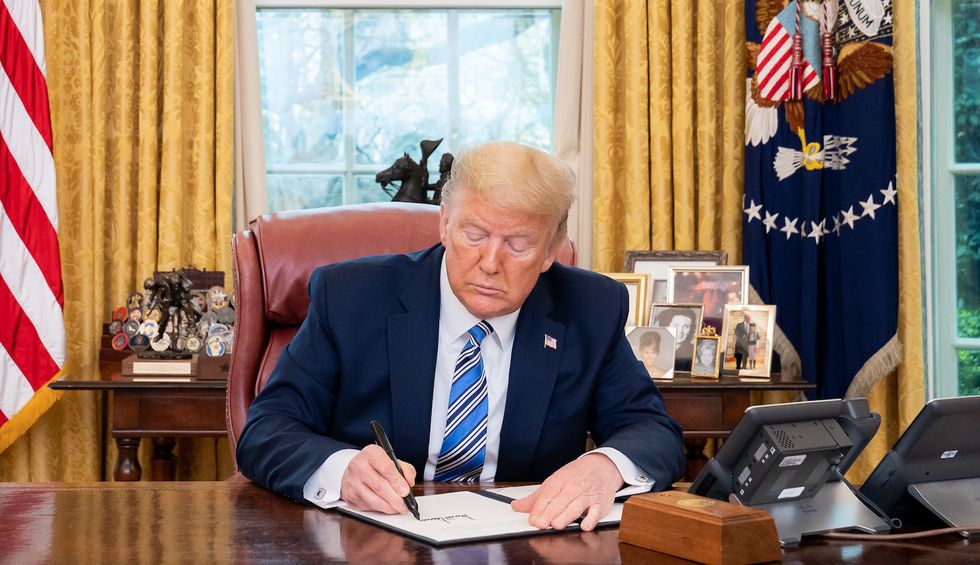 Even as President Donald Trump continues to insist that he's done a superb job handling the coronavirus crisis, the evidence of his extreme failures abound. In a hearing before Congress on Thursday, a top official in the administration's response contradicted Trump about the government's testing capabilities and acknowledged the shortfall as an important "failing."

And the same official, Dr. Anthony Fauci, warned the previous day about the outbreak: "It's going to get worse."

While Fauci was speaking as an expert in infectious disease, economists — and anyone glancing at the stock market — fear that the risk of financial fallout from the pandemic is equally dim.

And as Trump can't stop from patting himself on the back over his botched response so far, he shows little indication of improving his management of the crisis going forward. It seems he has three main policy tactics on the table for addressing the crisis, but none of them is anywhere close to adequate:

Trump has repeatedly boasted about his decision on Jan. 31 to restrict travel to the United States by foreigners who had recently been to China, where the outbreak began. It's not clear how much this policy really helped the U.S. — the virus came here regardless — but it may indeed have been the right call, and it may have delayed the spread of the outbreak.

But it appears the Trump administration squandered the time it bought with this measure; it didn't prepare health care facilities around the country for the coming onslaught, and it didn't amp up a testing regime that will be necessary to detect the growing number of coronavirus cases.

And now, Trump has launched a new travel ban against parts of Europe. Trump's announcement Wednesday night from the Oval Office of the restrictions was incredibly sloppy, filled with inaccuracies about the important details of the policy that had to later be corrected. And European officials don't appear to have been consulted about the change prior to the announcement, which only increases tensions with our allies. But most importantly, it's not clear what good the ban really does. It may help reduce the spread of the infection on the margins, but the outbreak is already unfolding in the United States, and that's where the administration's efforts will be needed. Yet the president laid out no comprehensive plan to reduce the spread of the virus stateside.

But as my colleague Jen Kirby has written, experts are deeply skeptical that travel restrictions are a particularly high-value measure at this point. And even if Trump’s enthusiasm for them is not wrong per se, it’s clear that his obsession with the concept of an external threat has had catastrophic consequences for the United States. Due to his strong orientation in favor of travel bans, Trump was early in restricting travel from China — a measure that he said would prevent the virus from entering the United States. It obviously failed at that goal, but Trump insists at every opportunity on claiming and receiving credit for having been ahead of the coronavirus curve.

The problem is that while these measures probably were successful at helping the United States buy time, Trump didn’t do anything with the time.

It’s understandable that the president hoped the travel restrictions would work. But he knew perfectly well that he hadn’t shut off all travel to the United States (which would have been economically ruinous) and thus that it was possible border control would fail. Experts were nearly unanimous in their judgment that travel restrictions would not work, and Trump not only overruled their advice to put restrictions in place, he ignored their warnings and did nothing to create any kind of fallback plan. And since he’s stubborn and vainglorious, he continues to insist that the moral of this whole story is that the experts were wrong and he was right so we should bank on further travel restrictions to save us. It’s absurd.

Now, as fears about the coronavirus tank the stock market and the economy appears to be approaching a recession, Trump and Republicans are floating the idea of a payroll tax cut. At its core, it's not the worst idea — getting people extra cash to forestall or mitigate a recession can work. But many argue that a payroll tax cut is the wrong way to go about it; we'd be better off just mailing everyone checks.

“A one-year payroll tax cut of 2% of income would provide up to a $5,508 tax cut to a high-income couple, only $500 to a single parent getting by on $25,000 a year, and nothing for a worker placed on leave without pay,” Jason Furman, chairman of the White House Council of Economic Advisors during the Obama administration, wrote on Twitter ...

In 2011-12, the Obama administration cut the payroll tax to 4.2% from 6.2%. “I was a key part of the negotiation that resulted in the payroll tax cut in 2011 and 2012. I continue to think it was the best we could do at the time given the political constraints. But it was far from optimal then and would be even further from optimal now,” Furman added.

“Also, it is not accelerated enough — it just drips out with each paycheck so it is spread out over time,” he said. “Right now time is of the essence. I would much rather get people money sooner. Maybe they save it. Maybe they have flexibility to miss some work. Maybe they spend it.”

The other approach Trump seems keen on taking is one of his favorite pastimes: bullying the Federal Reserve for more accommodative monetary policy. Trump has repeatedly complained when the Fed raised interest rates in the face of a strong economy, and he now seems to think it should be doing more to mitigate the coming obstacles. According to the Washington Post, he berated Treasury Secretary Steve Mnuchin in an effort to get him to urge Fed Chair Jerome Powell to do more.

But it's not clear how much more the Fed can really do. On Thursday, the New York Fed announced a plan to inject more than $1.5 trillion of liquidity into the flagging market, but the by end of day, the Dow Jones had nevertheless plummetted 10 percent, its worst day since 1987.

CNBC reported that experts don't believe central banks are well-equipped to change the trajectory of the potential downturn under these circumstances:

“The idea is deeply ingrained in financial markets that, when there is a major global economic downturn, central banks quickly come to the rescue with aggressive policy rate cuts,” analysts from Japanese bank Nomura wrote in a Thursday report.

“Markets are anticipating the same policy playbook even though this COVID-19-induced economic downturn is different from others,” they added.

The analysts explained that the current economic slump is not caused by financial events such as asset prices running ahead of fundamentals. Instead, it’s triggered by a spread of a new virus, so “the best immediate response” is “first and foremost health security policies,” they said.