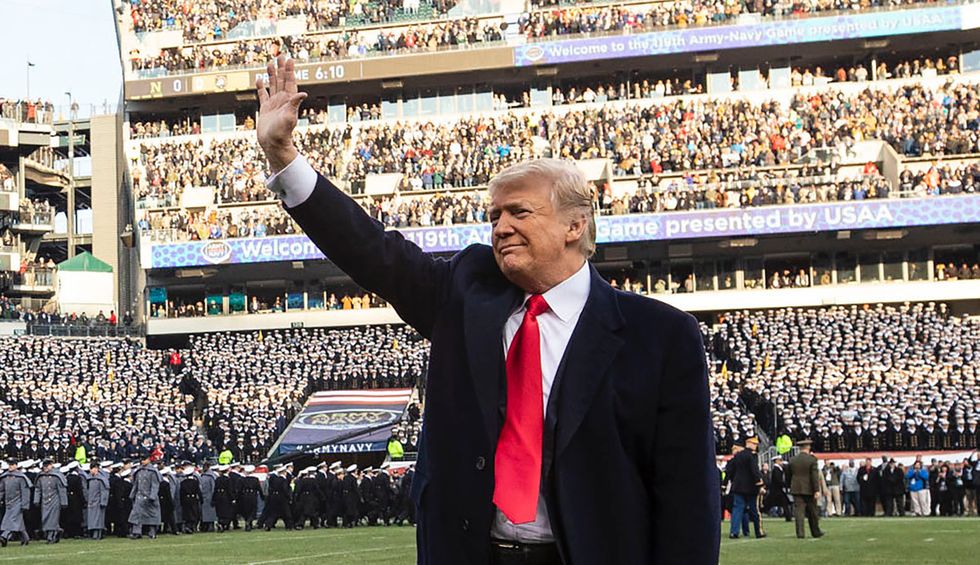 In a lengthy Wednesday press conference on the coronavirus President Donald Trump said he considers himself a “wartime president” and predicted America will have “total victory” in defeating the “invisible enemy,” which is the virus.

“I look at it – I view it as, a, in a sense as a wartime president,” said Trump, huddled closely with his Vice President and various members of his Coronavirus Task Force. “It’s a very tough situation, you have to do things, you have to close parts of an economy that six weeks ago were the best they’ve ever been. We had the best economy we’ve ever had,” Trump added, falsely.

“Then one day you have to close it down in order to defeat this enemy. But we’re doing it and we’re doing it well,” he said, in a series of remarks that were often focused on praising himself while ignoring the human loss of health and life.

“The American people have been incredible, for the most part they’ve been really incredible.”

Trump started his remarks by saying, “I would like to begin by announcing some important developments in our war against the Chinese virus,” which caused outrage among many on social media for its racism.

Minutes later, Trump launched into an address that sounded as if it were plucked from World War II.

“But we are going to defeat the invisible enemy. I think we are going to do it even faster than we thought, and it’ll be a complete victory. It’ll be a total victory,” he promised, again ignoring the human cost of health and lives.

Trump spoke during the press conference most of the time. As he did, the markets plunged, at one point triggering a “circuit breaker” forcing trading to halt for 15 minutes.

The markets have now erased all the gains made since Trump took office over three years ago.