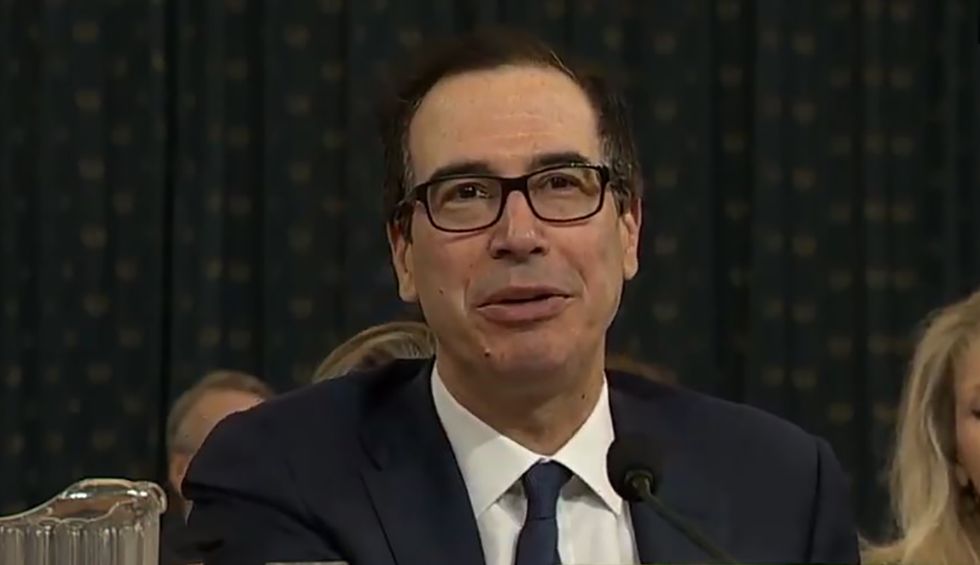 Having secured a multi-trillion-dollar bailout fund for large corporations and minimal relief for the public as the U.S. economy reels from the coronavirus crisis, the White House and Republican leaders in Congress are already throwing cold water on the prospect of a fourth stimulus bill that progressives say is necessary to address the deep flaws and gaping holes in the measure President Donald Trump signed into law last week.

One anonymous White House economic adviser told the Washington Post's Jeff Stein Monday that the chances of congressional Republicans supporting a stimulus bill that includes progressive priorities such as more money for food assistance, an increase in Medicaid funding, and recurring direct cash payments for U.S. households "are zero."

"No more spending," the adviser said. "We did all the spending."

The previous stimulus measure significantly increases unemployment benefits—though only for a period of four months—and provides a one-time, means-tested cash payment of $1,200 to millions of people while also establishing a $4.5 trillion bailout fund for big corporations.

While applauding the unemployment provisions and other aid in the bill, progressives assailed the measure as obscenely business-friendly and insufficient to help the public cope with the worsening national economic fallout. Advocates also voiced alarm at many provisions tucked inside the mammoth legislation, including a sneak-attack on Social Security and toothless oversight of the corporate "slush fund," which will largely be controlled by Treasury Secretary Steve Mnuchin.

But Democratic leaders justified compromise with the GOP on the grounds that there would be an opportunity to provide more relief for the vulnerable in a fourth stimulus package.

"This is not going to be the last bill," House Speaker Nancy Pelosi (D-Calif.) said on PBS last week as progressives warned she was giving up crucial leverage by letting a largely Republican-crafted measure slide. "This bill is about mitigation for the [economic] damage that is being done... The next phase will be recovery."

Senate Minority Leader Chuck Schumer (D-N.Y.), who led the Democratic side of negotiations on the previous stimulus measure, echoed Pelosi in a speech on the Senate floor: "This is certainly not the end of our work here in Congress—rather the end of the beginning."

However, top Republicans are signaling that they may not be willing to accept another major spending measure, particularly one that ramps funding for safety net programs they have tirelessly worked to cut.

"I'm not sure we need a fourth package," House Minority Leader Kevin McCarthy (R-Calif.) said in an appearance on Fox News Sunday. "And before we go to start drafting a fourth package, I'd like these three packages we just put out... to take care and get this economy moving."

Sen. Patrick Toomey (R-Penn.) told the New York Times Monday that "it's far too soon to know whether and of what nature additional legislation is needed."

"The ink is hardly dry on a $2 trillion-plus emergency package," said Toomey. "If we determine that another measure is necessary, it should not be the vehicle for Speaker Pelosi's partisan, parochial wish list."

Mnuchin, a former Goldman Sachs executive and the Trump White House's lead negotiator, said Sunday that "we will go back to Congress and get more support for the American economy" if the newly-passed stimulus is not effective but added, "I hope that's not needed."

The Times reported late Monday that even if a fourth stimulus package garners sufficient support, "Pelosi and other officials involved in previous negotiations have acknowledged that it is unlikely that any legislation to address the crisis would be ready for a floor vote before mid-April, with both the House and Senate in recess and not scheduled to return to Capitol Hill until April 20."

Some analysts suggested that Republican reluctance to spend on public relief may not persist if, as expected, future reports continue the trend of enormous increases in unemployment and declines in economic growth.

"It doesn't matter what some random West Wing jerk is posturing," tweeted Tyson Brody, research director for Sen. Bernie Sanders' (I-Vt.) presidential campaign, referring to the unnamed White House adviser's comments to the Post. "The coming revenue collapse will either change tunes now or in November."

In a video posted to Twitter late Monday, Sanders, a 2020 Democratic presidential candidate, stressed the need to get direct cash payments and unemployment checks from the previous stimulus out to U.S. households "as quickly as possible." Democratic aides have warned that those without direct deposit information on file with the IRS could face months of delays in receiving their cash payments.

"The goal here is to say that the federal government should cover the paychecks for you, even if you are at home right now," said Sanders. "Second of all, what we have got to do... is [at] the very least make sure that everybody in this country has access to the healthcare that they need without any out-of-pocket expense."