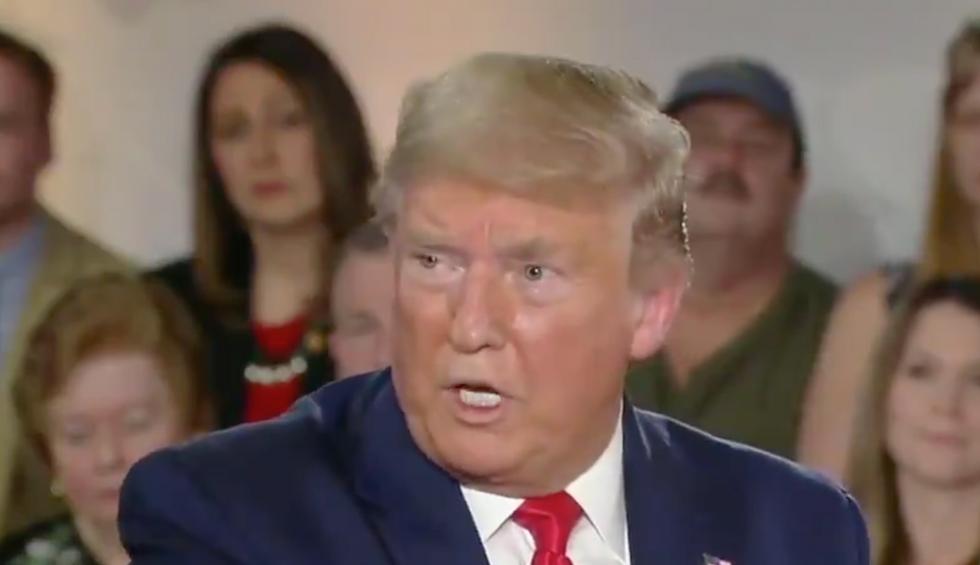 During a Fox News town hall Thursday night, President Donald Trump finally admitted what many have long feared — that he plans to push for serious cuts to entitlements, which includes Social Security and Medicare.

Of course, Trump has already admitted this in his budgets, even though he promised not to cut Social Security, Medicare, or Medicaid. (Trump has entirely dropped any pretense about seeking to cut Medicaid, which provides health insurance to people with low incomes.) In a recent interview, Trump also suggested that he intended to slash entitlements, though his phrasing was unclear, and it wasn't obvious he understood the question. Later, he tried to walk this back after an outcry.

But on Thursday, Trump was explicit:

Trump: The economy is the best economy we've ever had; it's nothing compared to what it's going to be when the trade deals kick it.

Host: But if you don't cut something in entitlements, you'll never really deal with the debt.

Trump: Oh, we'll be cutting, but we'll also have growth like you've never had before.

Now, there are a few things to notice here. First, observers fear that the economy is in serious peril because of the coronavirus outbreak. Second, Trump's claims about the trade deals "kicking in" are completely bogus. No credible economists are predicting any significantly positive impacts from the minor changes Trump has made to existing trade deals. Third, Trump has already made ostentatious predictions about sky-high growth because of the 2017 GOP tax cuts and his administration's deregulatory efforts, but these predictions have been consistently belied by a middling reality. He always wants to claim there's something better just around the corner, like any con man.

On the topic of entitlement cuts, critics will likely point out that Trump is here committing to break a promise he's made countless times. But the odd thing is that Trump knows cutting Social Security would be hard, and he knows there's no political benefit to doing it — that's why he pledged to protect the beloved program.

So why did Trump admit to wanting to cut it? His answer reveals his truly staggering level of suggestibility — at least around people he believes are his allies. When he hears it asserted that entitlements have to be cut, he wants to agree. This type of reaction bolsters much reporting indicating that Trump often agrees on a matter of policy with the last person who's in the room with him. It also reflects his insecurity; he's often not informed or confident enough in his own positions to adequately defend them, especially on technical matters like the national debt, so he'll just concede the point.

Which should, of course, worry us at least as much as someone who is deeply committed to slashing entitlements. It means, as we've seen, that Trump is easily manipulated. And that's a precarious trait for a president to possess.