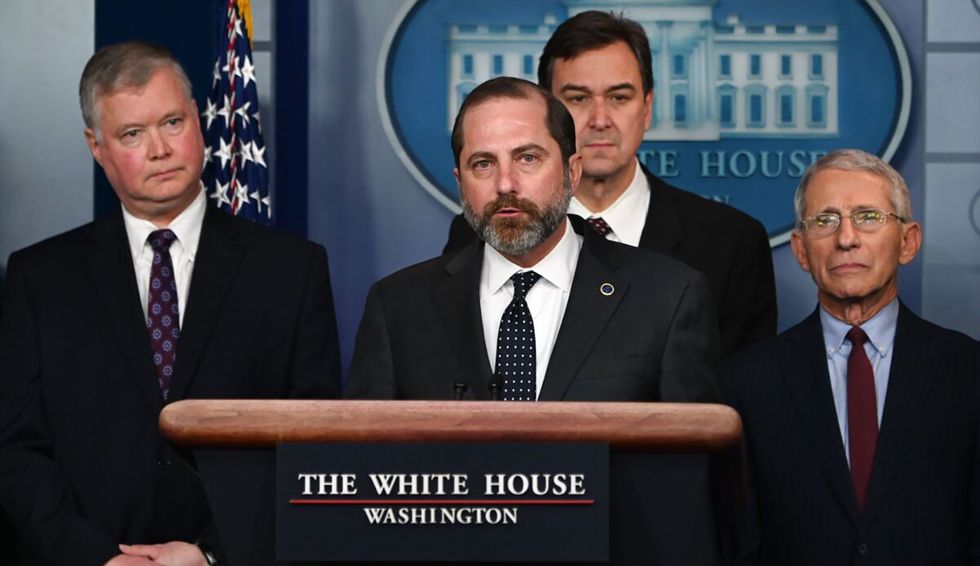 Health and Human Services Secretary Alex Azar added to the long list of worrying or downright scary coronavirus comments from Trump administration officials in a CNN appearance Tuesday morning. Azar admitted to having absolutely no idea how many people have been tested for COVID-19 in the U.S., even as the number confirmed to have the disease keeps growing.

Asked by CNN’s John Berman how many Americans have been tested, Azar responded, “We don't know exactly how many because hundreds of thousands of our tests have gone out to private labs and hospitals that currently do not report in to CDC.” Doesn’t that seem like something public health officials should have some idea about?

“We’re working with the CDC and those partners to get an IT reporting system up and running, hopefully this week, where we would be able to get that data, to keep track of how many we’re testing,” Azar continued. He suggested that up to 10,000 people a day could be tested now, with the number potentially rising to 20,000 by the end of the week—but that sounded extremely hypothetical and is based on a study by the American Enterprise Institute, not on, say, CDC predictions.

”After surveying local data from across the country, we can only verify that 4,384 people have been tested for the coronavirus nationwide, as of today at 4 p.m. eastern time,” The Atlantic reported on Monday. “I just wouldn’t want to speculate,” Azar said when Berman asked him if that number was accurate.

Azar tried to present that absolute lack of information as a sign of his honesty. “Listen, my hallmark here is that I’m going to tell you what I know, and I’m going to tell you what we do not know,” he said. “We’re about leveling with the American people and being transparent, and right now I’m just telling you, when somebody sells a test kit to a private entity, right now, we don’t know when or if that’s been used, but we are working with them to get that system set up.”

Okay, so you’re leveling with us … that you don’t know anything about how the Trump administration is coping with the major disease outbreak you are supposed to be taking a lead role in responding to. That is not confidence-inspiring.

South Korea was testing more than 10,000 people a day within a week of its first coronavirus infection, Berman said, while it’s been more than two weeks since the first case of community transmission in the U.S., but “we may not have tested 10,000 people total.” Azar’s response? “We don’t know that.” Not a good defense, dude! That is exactly the kind of information you are supposed to know!

Azar went on to insist that the U.S. was testing in similar ways to countries that have similar levels of COVID-19. “We now have a surplus of tests out there available, John, so they’re out in the community, they’re available, doctors and public health officials—at no time, at no time, has a public health official who wanted to get an individual tested for novel coronavirus been unable to get them tested through the CDC’s labs or other labs authorized by CDC early on.”

Based on what doctors and sick people are saying, that is either a lie or a masterpiece of weasel-wording. For instance: “The Georgia Department of Public Health has basically thrown up their hands when it comes to testing patients who do not require hospitalization,” an emergency room doctor in Georgia told The Atlantic. “On Friday we were told, ‘If the patient doesn’t have a travel history and doesn’t need to be admitted to the hospital, don’t bother calling; we’re not going to test.’”

The lack of testing means that we do not know how many cases of coronavirus are really in the United States right now. We have not a flipping clue. And the government apparently doesn’t even know how many people have been tested—kind of important information if you’re wondering how many more people might have the disease.