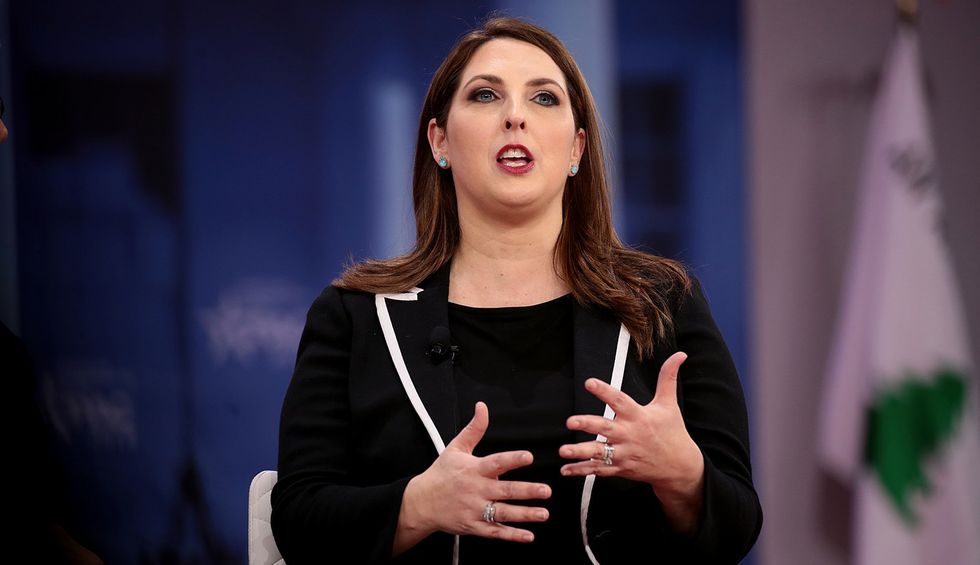 The Republican National Committee has paid hundreds of thousands of dollars to contractors closely connected to the organization’s chairwoman, Ronna McDaniel.

One contract went to her husband’s insurance company. Two others went to businesses whose executives recently donated to Ronna for Chair, a largely inactive political action committee that McDaniel controls. She had set it up in 2015, when she successfully ran for chair of the Republican Party in Michigan, her home state.

The companies won the contracts soon after McDaniel became the party’s top official. She was picked for the position by President Donald Trump after the 2016 election.

The RNC vendor payments and PAC contributions, detailed in federal tax filings and campaign finance reports, mirror a trend of transactions with favored contractors and employees previously reported by ProPublica.

The RNC conflict-of-interest policy states that employees “should avoid even the appearance of impropriety,” such as steering work to “members of an employee’s family” and businesses “with which the employee has a financial relationship.”

An RNC spokesman, Mike Reed, did not make McDaniel available for an interview. In a statement, he said ProPublica’s reporting was an attempt to make “innocuous RNC spending items seem scandalous,” and he accused ProPublica of harboring “a severe bias against conservatives and President Trump.”

Under McDaniel, the RNC is generating and disbursing record amounts, bringing in about $240 million last year and spending just over $190 million. And public scrutiny of its spending is increasing. ProPublica reported last month that in 2019 the RNC obscured payments to its chief of staff, who executes vendor contracts and is part of a tight network of operatives who have reaped financial rewards during the Trump era. This week, The New York Times reported that since 2017 the tiny circle, including a husband-and-wife duo of former RNC chiefs of staff and Trump’s campaign chairman, Brad Parscale, have billed the campaign, the RNC and other Republican groups some $75 million.

The president of that particular office is Patrick McDaniel, the husband of the RNC’s chairwoman.

Reed, the party spokesman, told ProPublica that the Hylant contract “did not violate any RNC policy,” despite the organization’s written guidance about awarding business to members of an employee’s family. Reed said the RNC’s then-treasurer “solicited and signed off on” Hylant’s services. He did not not address who recommended Hylant or why the work was done out of the company’s Detroit office. Reed added that McDaniel’s husband “does not own this company and he received no financial benefit from this work.” Neither Hylant nor Patrick McDaniel returned messages seeking comment.

The two companies whose executives made contributions to McDaniel’s PAC had not received work from the RNC before she became chair.

Less than a week after McDaniel took over the party in January 2017, the RNC made its first monthly payment to the Templar Baker Group, a small political consulting outfit in Michigan headed by Robert Schostak, who chaired the Michigan Republican Party before McDaniel. Since she has been at the RNC, campaign finance reports show, Templar has been paid more than $550,000 for “political strategy services.”

Schostak is also a partner in MadDog Technology, a firm that is chaired by Peter Karmanos Jr., who helped found Compuware, once Michigan’s leading computer technology company. Last year, according to FEC filings, the RNC paid MadDog $50,000 for “website services.”

Reed, the RNC spokesman, did not describe what services Templar and MadDog provided the organization, but he said they were “invaluable.” When asked about McDaniel’s relationship to Schostak and Karmanos, and the timing of their PAC contributions, he said that ProPublica was “trying to connect dots to come up with something scandalous.” Moreover, he added, McDaniel “has no financial relationship” with MadDog and Templar.

Reed also disputed that the vendors had not worked with the RNC before McDaniel became chair, an assertion that is contradicted by FEC reports. When asked to explain the discrepancy, he referred to Kim Jorns, who, he said, “has worked with the RNC prior to the Chairwoman’s tenure.”

Jorns is an employee at Templar and previously was an RNC staffer, serving as regional political director in the 2016 election cycle. She didn’t return a message seeking comment.

Karmanos and Schostak did not respond to requests for comment.

Last year, Ronna for Chair received no contributions, but it continued to spend money, a practice that is legal and common among elected officials.

McDaniel was reelected as chair of the RNC in January 2019, with Trump’s endorsement. Two days earlier, her PAC paid $5,000 to Kathleen Berden, a voting member of the RNC, a volunteer position. Reed said the PAC paid Berden because she “whipped votes” for McDaniel’s reelection. He would not address why McDaniel needed Berden’s services or whether it was appropriate for McDaniel to pay a volunteer RNC voting member to influence fellow voters.

When reached for comment, Berden declined to elaborate on her work for McDaniel.