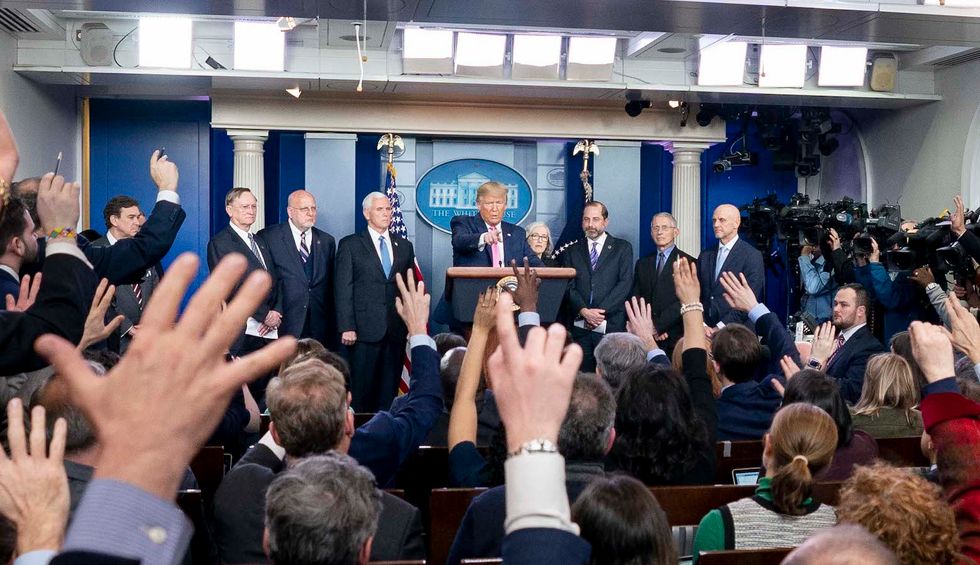 The national press is still failing at one of its key responsibilities during a national crisis: alerting the public when a public figure is lying. The New York Times is once again receiving criticism for both-sidesing basic facts of the emergency we now face, this time over Donald Trump's bizarre and nonsensical claim, in response to state governors asking for more COVID-19 tests, that he "had not heard about testing in weeks."

Trump's intended claim was that he had heard no complaints of the unavailability of tests in "weeks." Given the devotion of Trump to his television set, that is self-evidently not true. The demand for test kits, swabs, and related materials has remained critical; in most recent numbers, of 18,000 tests run in New York, half came back positive, a sure sign that testing remains rationed to only the most obviously sick (or wealthy, but that is a different post) individuals.

The New York Times take on Trump's claim? Trump “suggests” that an obviously false thing is true, while others “disagree.”

This is the Times headline chosen for the report on Trump's false statement: “Trump Suggests Lack of Testing Is No Longer a Problem. Governors Disagree.” A near-definitional usage of the both sides political construct, but applied here to a fact that is, anywhere outside of the participants' own noggins, established and uncontroversial. Initial testing fiascos aside, there is not enough testing taking place now to be able to lift shelter-in-place orders any time soon, and we do not have enough visibility into the virus' spread to be able to warn cities of new virus spreading, much less verify the relative "safety" of other locations.

The complaint of Montana Gov. Steve Bullock, who warned that his state could not do the necessary "contact tracing" of known infected individuals in order to determine how they got the virus and who else was likely exposed, was due to the lack of tests. This is the most basic step of all—warning the public of the existing dangers and hotspots. And the Times indeed gave all the information needed in their write-up to confirm that testing is indeed inadequate. It did not treat the point as controversial. It is not controversial.

But it still privileged Trump's version, what he "suggests," with a weight equal to what governors and every expert say on the other side. It was "Trump suggests," not "Trump suggests, without evidence" or "Trump falsely claims."

The Times, and most other national outlets, refuse to cover one of the most dramatic stories of modern times. A president is lying, outright, to governors, to his staff, and to the American public. He is doing so repeatedly, for self-serving reasons. It is risking lives, as when he shamelessly peddles a new alleged miracle cure for the virus. It has, itself, helped to cause the crisis we are currently in; Trump for weeks simply denied the virus would spread here, refused to recognize when it did, downplayed the health risks, and otherwise misled the public, relentlessly, as his own intolerance for contrary information hampered government efforts to warn otherwise.

This is a continued failure of the Times and one that itself is harming the American public. For whatever reason, the Times continues to insist that its own version of "journalism" privileges propaganda given in official settings, regardless of how false and damaging that propaganda may be. To the Times, whatever a public official says is news.

To the Times, why they are saying it, whether they are correct in saying it, and what damage they are willingly doing by saying it is ancillary. The lie is the most important news; the rest is dribbled out in later paragraphs.

Times reporters taken to task for this discrepancy of purpose continue to be dismissive of their critics:

why on earth would you respond in such a dismissive way to someone this qualified offering informed criticism https://t.co/qIilOCj6gd
— John Whitehouse (@John Whitehouse)1585666572.0

The political press in this country is incapable of dealing with government-promoted propaganda. They lack the tools for it—they lack even a fundamental understanding of it. The same reporters who would without hesitation note the malevolence of government-spread misinformation by another nation have nothing unpleasant to say about its new domestic usage as core tool of our own government.

Political reporting requires access to its targets; identifying corrupt intent in official statements would hinder that access. Political reporting requires a "neutrality" that privileges no political side; when one political side disproportionately and overwhelmingly uses falsehoods to make its case, the reflex is to balance the lies with the usual “opponents disagree.” We may even get to “experts disagree,” on rare occasions—but the obvious conclusions will be purposefully evaded. It will be considered, at best, an error by the public figure saying untrue things. It will not be considered, even after a dozen repetitions or 15,000, to be intentional use of falsehoods as policy.

The reliance of current U.S. leaders on false information to shape public reaction and behavior—propaganda—has now landed us in the midst of a simultaneous nationwide health crisis and economic depression. It is still not newsworthy, even now?

Trump lied when he said he was unaware of the ongoing failures of testing. He either lied, has been misled by his own staff, or has such severe cognitive problems that he has forgotten the current state of things. Any of the three is a blockbuster story, a vital one, one that will with certainty steer what happens next in the pandemic's spread.

Why did he lie? To deflect blame. Why would his staff lie to him? To avoid a raging, incoherent temper that causes Trump to summarily remove those that give him unpleasant feedback. Is it genuinely possible that Trump has forgotten that testing remains one of the most important ongoing roadblocks to reducing the impact of the pandemic? Perhaps.

But "Trump suggests an obviously false thing" is an irresponsible, dangerous premise. If there is a story to be told, it is about why such an egregious thing happened.

At this point there seems little likelihood that the papers of the day will even reflect on, much less alter, their insistence on using old journalistic norms to report on new, incongruent realities. The United States government is lying, frequently, about matters of life and death. It is doing so for the political advantage of the liars. It is not normal, and cannot be made normal—unless we are no longer a democracy, the press is no longer free, and all of this is, at this point, solely for show. If the Times cannot serve the public with blunt, factual news about the government misleading us, why does it exist? What is the treasured access for? Gathering "news," or merely gathering "stories?"

Trump claimed to complaining and desperate state officials that he "had not heard" that there were still dire shortages of testing as the pandemic wave still, even now, continues to build. He lied to them. He lied to us. Find the story in front of you, rather than squeezing his words into the both sides framework used by the press to shirk its own public responsibilities.