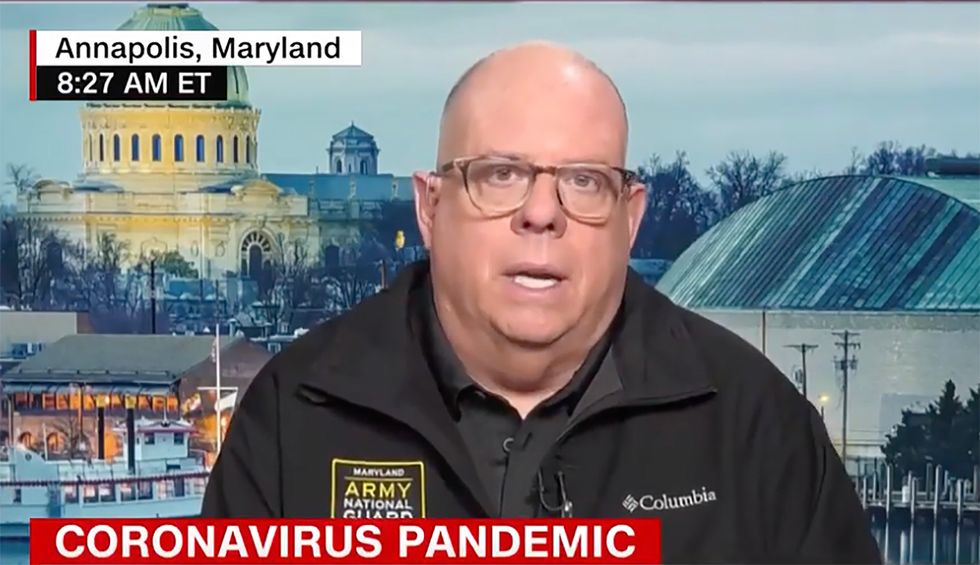 President Donald Trump this week expressed hope that social distancing restrictions will be eased in the United States in the next few weeks to mitigate a substantial downturn of the U.S. economy. But when Maryland Gov. Larry Hogan, a Republican, was interviewed on CNN on Tuesday, March 24, he stressed that he will maintain strict social distancing measures in his state for as long as he believes it is necessary.

CNN’s John Berman noted that Trump has been talking about “relaxing social distancing guidelines” while Hogan has been aggressively closing non-essential businesses in his state — and Berman asked the Maryland governor, “How do those two things match?” Hogan replied, “Well, they don’t really match, quite frankly.”

Hogan went on to say that Trump’s “messaging” not only doesn’t match with what he is doing in Maryland, but also, with some of the messaging in his own administration.

“You have the surgeon general and [Director of the National Institute of Allergy and Infectious Diseases Dr.] Anthony Fauci saying things almost completely opposite of that yesterday,” Hogan explained. “So, we’re just trying to take the best advice we can from the scientists and all the experts and making the decisions that we believe are necessary for our states. We don’t think that we’re going to be, in any way, ready to be out of this in five or six days or so.”

Hogan added, “Most people think that we’re weeks away from the peak, if not months, and that’s the advice we’re getting from the smart folks at Johns Hopkins and NIH and University of Maryland and places like that.”

Johns Hopkins University in Baltimore and the National Institutes of Health (NIH) have been consistent sources of information during the coronavirus pandemic.

Although Hogan has not issued a stay-at-home order for his state — unlike governors in some other northeastern states — he has ordered that businesses in Maryland he considers “non-essential” remain closed.

Hogan explained, “Well, really, it’s basically semantics about how you define it, but we closed more businesses than many of the states that have stay-at-home orders. It’s like, we’ve encouraged and suggested that anybody that doesn’t need to go out — that isn’t an essentially business — that they do stay home. We’re very strictly enforcing the limitations on social distancing of no groups of ten or more…. And so, it has the same effect.”