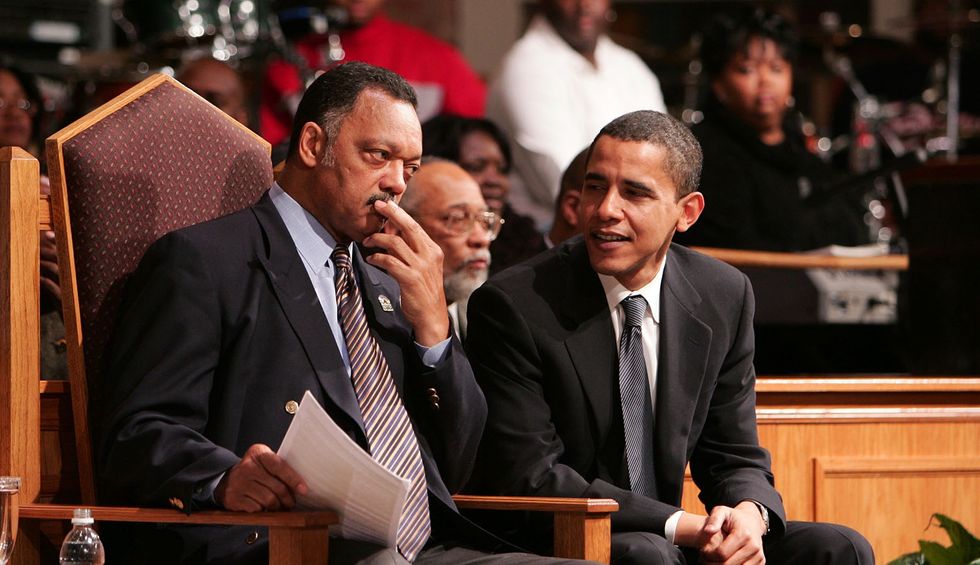 The endorsement from Jackson, who sought the Democratic nomination in 1984 and 1988, came just a day after the U.S. senator from Vermont held a rally in Chicago's Grant Park attended by about 15,000 people. Jackson spoke Sunday at a Sanders campaign event in Grand Rapids, Michigan.

Registered Democrats in Michigan, Idaho, Mississippi, Missouri, North Dakota, and Washington are slated to weigh in on the party's presidential primary race on March 10, followed by voters in Illinois, Arizona, Florida, and Ohio on March 17.

The only way we will defeat Trump in November is by bringing in people who have given up on the the political proce… https://t.co/HLvCBdL6Cn
— Bernie Sanders (@Bernie Sanders)1583686896.0

Since Super Tuesday, political commentators have declared the contest a two-person race between Sanders and former Vice President Joe Biden "for the future of the Democratic Party and the country." Jackson said in his endorsement of Sanders Sunday that "we have a right to ask and expect candidates who benefit from the African-American political firewall to deliver what we need under the potential leadership of Bernie Sanders or Joe Biden."

"With the exception of Native Americans, African Americans are the people who are most behind socially and economically in the United States and our needs are not moderate," said Jackson. "A people far behind cannot catch up choosing the most moderate path. The most progressive social and economic path gives us the best chance to catch up and Senator Bernie Sanders represents the most progressive path. That's why I choose to endorse him today."

Today is a special day for our campaign. Rev. Jesse Jackson is one of the most transformative figures in modern Ame… https://t.co/J6dQr19ywg
— Bernie Sanders (@Bernie Sanders)1583695940.0

"The Biden campaign has not reached out to me or asked for my support," Jackson noted. "The Sanders campaign has, and they responded to the issues I raised and the concerns I expressed." The civil rights leader shared a list of 13 comments and commitments from the Sanders campaign, which included addressing voter suppression; tax and trade reforms; advancing Medicare for All; providing high-quality, free public education; and promoting peace and ending endless wars.

The campaign also pledged that as president, Sanders will ensure that Black women are in his cabinet, at the highest levels of his administration, and on the U.S. Supreme Court; "work to create a market" for black farmers," who have historically faced discrimination; invest in specific educational needs of black, brown and poor communities; commit extra funding to rural and minority health centers; and support "more trade and fair trade between African Americans, Africa, and the Caribbean nations."

In 1988, as Grim detailed, Jackson secured a significant victory in the Michigan primary and Sanders—then the Independent mayor of Burlington, Vermont—supported his insurgent candidacy:

After the Michigan victory, Bernie Sanders went all in, calling a local press conference and announcing that he would be participating in the April Democratic caucus to back Jackson. "I am the only non-Democrat, non-Republican, Independent progressive mayor in the United States of America. OK, it is awkward, I freely admit, it is awkward for me to walk into a Democratic Party caucus, believe me, it is awkward. I am not a Democrat. Period," he said.

But he said the stakes were too high, and the opportunity too great, to stand aside on principle. Jackson, he argued, could remake the Democratic Party in an image of social justice. "So while in fact, he may end up losing some conservative white votes, some racist white votes, I think there is a real chance that he could do what [Walter] Mondale couldn't do in a million years. That is to bring millions and millions of poor people and working people into the political arena who in the past never participated."

The embrace of Jackson's rise in Burlington was quite different from the reaction of "pandemonium" in Washington, D.C. As Grim put it: "Just as party leaders melted down publicly after Sanders' win in the Nevada caucuses, they did so after Jackson's triumph in Michigan."

Meanwhile, he noted, "Biden, then a senator from Delaware, had dropped out of the race following a plagiarism scandal and dismal polling numbers."

Grim was far from alone in regarding Jackson's endorsement of Sanders as a "full circle moment."

The "Black Firewall" has changed the dynamics of the 2020 presidential campaign.  The question is what has the firewall earned?  What will be the return on the black firewall's political investment?  And what difference will the political contribution that the firewall is making, make in the individual lives of African Americans and in the African American community?

When President Abraham Lincoln's back was against the wall he came up with a meaningful proposition—the Emancipation Proclamation. The issuing of that proposition allowed him to free the "colored troops" to fight to save the Union.  And after the Civil War, the colored troops saving the Union allowed the Union to free the slaves and affirm their citizenship with the 13th, 14th and, 15th Amendments.  What will the firewall mean for the black community under the leadership of Senator Bernie Sanders or former Vice President Joe Biden in 2021 and beyond?

President John F. Kennedy was slowly gaining concern and understanding of the black community when he was assassinated.  Given LBJ's background and history it was not easy for the civil rights community to trust him.

But under LBJ the black community and the nation got a 1964 Public Accommodations Act, a 1965 Voting Rights Act, a 1968 Opening Housing Act, a War on Poverty, an Elementary and Secondary Education Act, Medicare, Medicaid, an EEOC, Head Start, a functioning U.S. Civil Rights Commission and more.

We have a right to ask and expect candidates who benefit from the African American political firewall to deliver what we need under the potential leadership of Bernie Sanders or Joe Biden?

With the exception of Native Americans, African Americans are the people who are most behind socially and economically in the United States and our needs are not moderate.  A people far behind cannot catch up choosing the most moderate path. The most progressive social and economic path gives us the best chance to catch up and Senator Bernie Sanders represents the most progressive path.  That's why I choose to endorse him today.

The Biden campaign has not reached out to me or asked for my support.  The Sanders campaign has, and they responded to the issues I raised and the concerns I expressed with the following commitments:

That's some of what the firewall needs and that Senator Sanders has committed himself to, and that's why I can enthusiastically endorse Senator Bernie Sanders today.