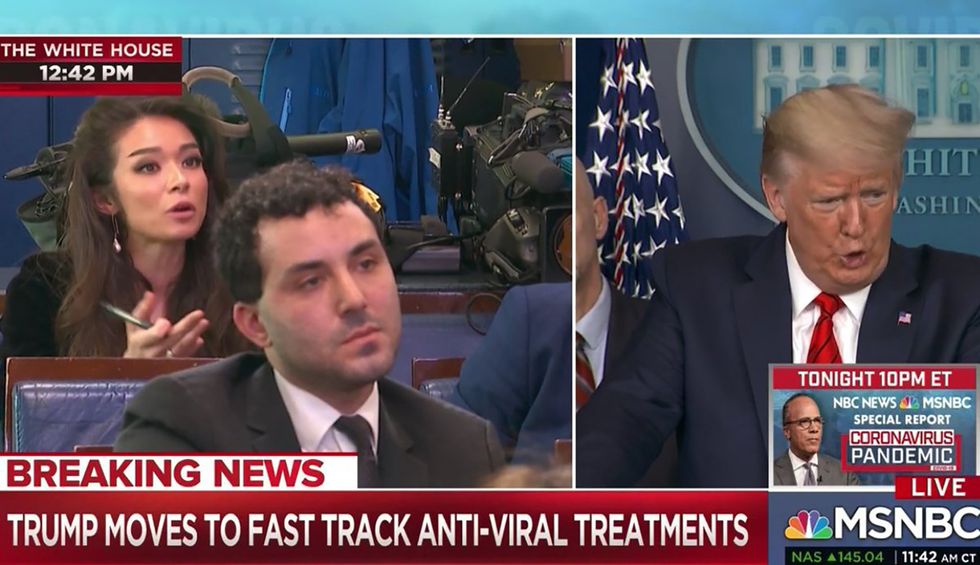 The White House press briefing room this week implemented a temporary seating chart to accommodate the Center for Disease Control and Preventions’s social distancing guidelines, but Donald Trump's staff still managed to carve out space for One America News Network, the far-right network known for it’s pro-Trump content. And on Thursday, that network's correspondent, Chanel Rion used her hard-hitting journalistic chops to ask the president whether he considers the term "Chinese food"  racist, and rant against the "left-wing media” that "consistently [sides] with foreign state propaganda" just to oppose Trump.

No summary can do Rion’s question justice, so here she is in her own words:

“Do you consider the term ‘Chinese food’ racist, because it’s food that originated from China? And on that note, major left-wing media — even in this room — have teamed up with Chinese Communist Party narratives, and they are claiming you are racist.”

“Is it alarming that major media players, just to oppose you, are consistently siding with foreign state propaganda, Islamic radicals and Latin gangs and cartels? And they work right here out of the White House with you and your team!”

Trump, of course, used that remarkable setup to complain about the “dishonest” media (blah blah blah, we’ve heard this tune before). As he finished, Rion replied, “More than ‘dishonest!’ They’re siding with state propaganda!”

Members of the press were largely unimpressed with Rion’s superb contribution to journalistic inquiry. Below is a sample of tweets:

OAN is not a news organization. They're a media arm of the Trump administration and the Trump campaign. Not complicated.
— Isaac Saul (@Isaac Saul)1584636977.0

OAN is not journalism; it’s propaganda. The fact they have White House credentials is an insult, and this incredibl… https://t.co/K25Hn6nOYr
— Kristen M. Clark (@Kristen M. Clark)1584636594.0

Trump and OAN turning this Covid-19 press conference into a PSA against journalism is nauseating.
— Hal Rudnick (@Hal Rudnick)1584636489.0

Chanel is the idiot who just asked the question for OAN at the White House presser... https://t.co/zRbYYAbA7f
— Scott Feinberg (@Scott Feinberg)1584636420.0

OAN's questions during the presser are embarrassing even by conservative standards
— johnknefel (@johnknefel)1584636270.0

But it wasn’t all bad. At least Ann Coulter liked her: