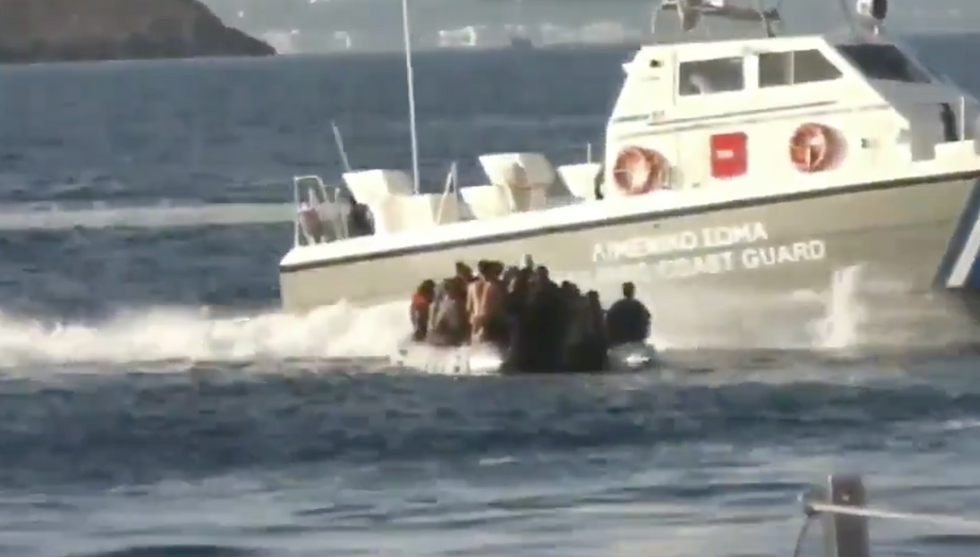 Amnesty International on Monday condemned "inhumane" measures that Greek authorities have taken toward migrants since Turkish President Recep Tayyip Erdoğan announced last week that Turkey would no longer stop refugees and asylum-seekers—many of whom have fled the ongoing war in Syria—from crossing by land and sea into Greece.

Turkey eased restrictions at the western border it shares with Greece in response to thousands of migrants from Syria who have poured into Turkey in recent days amid a Russian-backed Syrian government offensive into Syria's Idlib province and escalating violence between Syrian and Turkish forces.

Greece has deployed military forces to the border. As of late Saturday, International Organization for Migration (IOM) staffers observed upwards of 13,000 migrants in the area. Greek authorities, who have reportedly stopped over 24,000 attempted crossings and arrested 183 people since Saturday, have used water canons, tear gas, and stun grenades against the migrants.

The Greek government announced Sunday that it would suspend asylum applications for one month and deport migrants who have illegally entered the country. The New York Times noted that "neither move announced by Greece is permitted by European Union law, but the Greek government said it would request special dispensation from the bloc. International protocols on the protection of refugees, of which Greece is a signatory, also prohibit such policies."

Eve Geddie, director of Amnesty International's European Institutions Office, declared Monday: "Everyone has a right to seek asylum. Deporting people without due process could mean sending them back to the horrors of war or expose them to grave human rights violations, breaching the fundamental principle of non-refoulement."

"The reckless measures being taken by the Greek authorities are a blatant breach of E.U. and international law that will put lives at risk," she said. "People seeking asylum are once again being used as bargaining chips in a callous political game."

Geddie expressed concerns about Greek forces violently stopping migrants on land as well as reports of locals on the Greek island Lesbos blocking boats from coming ashore and attacking activists and the cars of volunteers and journalists.

"Greece must refrain from using excessive force and ensure search and rescue operations can operate at sea. People who are seeking asylum in Greece should be helped, not treated as criminals or a security threat," Geddie said.

"E.U. member states must also do far more to share responsibility for asylum-seekers arriving in Turkey, both through financial support and ensuring safe pathways to Europe," she added. "The European Commission must also urgently coordinate any support that might be required to Greece and Bulgaria, to ensure asylum-seekers have access to adequate reception and asylum procedures."

The condemnation from Amnesty International came as reports emerged Monday about the first confirmed fatality of the ongoing border crisis; a young Syrian boy drowned to death when a boat full of migrants capsized off the Lesbos, according to Reuters.

Turkish authorities on Monday released a video, reported on by the Middle East Eye and The Independent, of the Greek coastguard allegedly trying to capsize a boat full of migrants.

The Independent reported that the migrants were later rescued by the Turkish coastguard, but it was unclear if this was the same boat that capsized and lead to the death of the young boy, which was disclosed by the Greek coastguard Monday.

Amid mounting international alarm, the Greek prime minister, Kyriakos Mitsotakis, said he would visit the Evros region on Tuesday with top E.U. officials, including the E.U. commission chief, Ursula von der Leyen, and president of the European Council, Charles Michel.

The trip is expected to be a show of solidarity for the embattled member state.

With senior figures in the ruling center-right administration describing the attempts to breach the country's borders as an "invasion" orchestrated at the highest levels of government in Turkey, Athens is leaning on Brussels for more support.

The developments Monday followed a statement Sunday from the United Nations Refugee Agency (UNHCR) that called for "calm and an easing of tensions on Turkey's borders with the European Union in light of the present increased movements of people there—including refugees and asylum-seekers."

The agency explained that it is monitoring the conditions in the region as well as providing humanitarian support, and emphasized that "it is important that the authorities refrain from any measures that might increase the suffering of vulnerable people."

Regarding the asylum decision, the statement said:

Neither the 1951 Convention Relating to the Status of Refugees nor E.U. refugee law provides any legal basis for the suspension of the reception of asylum applications. Article 78(3) of the Treaty of the Functioning of the E.U. (TFEU) has been evoked by the Greek government in this regard, however this provision allows for provisional measures to be adopted by the Council, on a proposal from the Commission and in consultation with the European Parliament, in the event that one or more member states are confronted by an emergency situation characterized by a sudden inflow of third country nationals while it cannot suspend the internationally recognized right to seek asylum and the principle of non-refoulement that are also emphasized in E.U. law. Persons entering irregularly on the territory of a state should also not be punished if they present themselves without delay to the authorities to seek asylum.

The UNHCR also established broad priorities for the international community's response to this crisis with regard to both Greece and Turkey.

"Greece, and other states on the E.U. external border, should not be left alone. Continued European resources, capacity, and solidarity are needed to boost Greece's response," the agency said. "At the same time, international support to Turkey, which already hosts millions of refugees, as well as other countries neighboring Syria, must be sustained and stepped up."

The Associated Press noted Sunday that "Turkey already hosts 3.6 million Syrian refugees, as well as many others from Africa, Asia, and the Middle East." In a comment to the AP, Fahrettin Altun, the communications director for Turkey's Erdoğan, called for European assistance.

"Europe and others must take robust action to address this monumental challenge," Altun said. "We can't be expected to do this on our own."