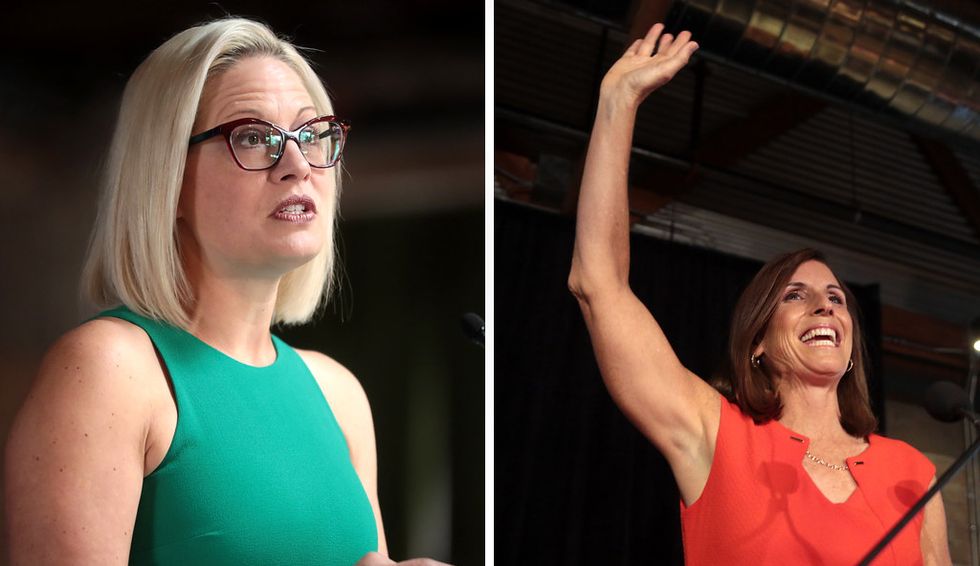 Centrist Democrat Kyrsten Sinema and far-right Republican Martha McSally were bitter rivals in Arizona’s U.S. Senate race of 2018, but the Arizona senators found some common ground when they joined one another in attacking Sen. Rand Paul over reports that the Kentucky Republican had used the Senate gym while awaiting a coronavirus test.

Sinema, after learning that Paul had coronavirus, tweeted, “I’ve never commented about a fellow Senator’s choices/actions. Never once. This, America, is absolutely irresponsible. You cannot be near other people while waiting for coronavirus test results. It endangers others & likely increases the spread of the virus.”

McSally, an ardent supporter of President Donald Trump who recently sparked a controversy after insulting CNN reporter Manu Raju as a “liberal hack,” saw Sinema’s tweet and was in total agreement with her. On Twitter, the Republican told Democrat Sinema, “I couldn't agree more @kyrstensinema. As we ask all Americans to sacrifice their livelihoods and alter their behavior to save lives, we must ourselves model appropriate #coronavirus behavior. No one is too important to disregard guidance to self-quarantine pending test results.”

I couldn't agree more @kyrstensinema. As we ask all Americans to sacrifice their livelihoods and alter their behavi… https://t.co/0JrxP9TcZ5
— Martha McSally (@Martha McSally) 1584929067.0

Paul’s actions are in stark contrast to those of another far-right Republican senator who has self-quarantined: Sen. Ted Cruz of Texas. Although Cruz has not tested positive for coronavirus, he voluntarily self-quarantined as a precaution after learning that a man he interacted with at the recent 2020 Conservative Political Action Conference (CPAC) in Maryland had tested positive.

In 2018, McSally against Sinema, shocking the political world when she lost to a Democrat in Arizona. In January 2019, Sinema took over the U.S. Senate seat vacated by Republican Jeff Flake. But McSally was appointed by Republican Gov. Doug Ducey to Arizona’s other U.S. Senate seat: the one once held by the late John McCain. McSally is seeking reelection this year, but polls have shown her trailing Democrat Mark Kelly (a former astronaut) in head-to-head matchups. And if Kelly wins in November, Arizona would end up with two Democratic U.S. senators — which would be a big change from the deep red Arizona that, for decades, was synonymous with Republican Sen. Barry Goldwater.

As of early Tuesday morning, March 24, the Center for Systems Science and Engineering (CSSE) at Johns Hopkins University in Baltimore, Maryland was reporting that the worldwide death toll from COVID-19 had reached 17,156.

Paul, who is the son of former Texas Rep. Ron Paul and shares many of his libertarian beliefs, is the first U.S. Senator to test positive for COVID-19.