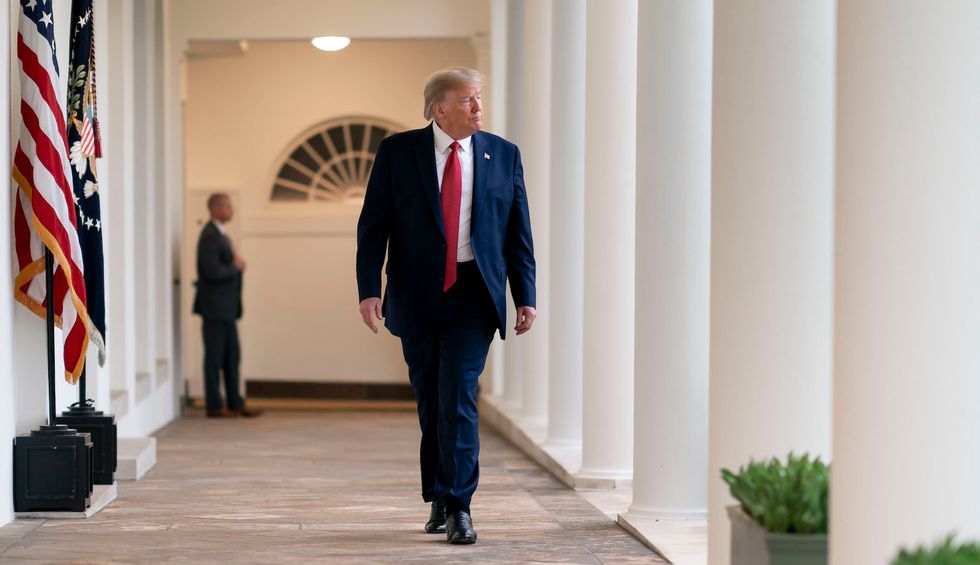 Coronavirus is reshaping our world in nearly every conceivable way — from shutting down borders to making handshaking verboten — and we need to be prepared for more changes coming down the pike. With enough foresight, we might be able to mitigate the damage of some of the costlier developments before they arise.

That's why David Daley, a senior fellow for Fair Vote and author the new book "UNRIGGED: How Americans Are Battling to Save Democracy," is sounding the alarm about the prospects for the 2020 election.

"The biggest fear is that this public health crisis explodes into a constitutional crisis," Daley told me.

We've already seen signs that something like this might be coming. As the country remains under guidelines to practice strict social distancing — avoiding crowds, limiting unnecessary travel outside the home, standing at least six feet away from others if possible — it gets harder and harder to imagine how a normal election might take place. As the crisis was ramping up, Ohio Gov. Mike DeWine announced that he was canceling the March 17 election, in which Democratic primary voters were primed to go to the polls. He made this announcement the day before in-person voting was to take place, citing the danger posed by the outbreak, only to be ordered by a judge to proceed with the vote. He defied that order and kept the polls closed anyway.

This disturbing precedent is an ominous warning for November 2020, when the stakes will be much higher, Daley argued. Ohio, after all, could be a swing state in the presidential election. What happens if we're in the midst of another outbreak of the virus by then, and a governor in similar position to DeWine chooses — even for good reasons — to cancel voting? We could wake up Wednesday morning on Nov. 4 and find we haven't elected any president at all.

A failure to hold a real statewide election on voting day could leave the task of selecting electors for the electoral college to state legislatures. Since many state legislatures in potentially blue states are held by Republicans, this could be a catastrophe for democracy. And that's where the risk for a true constitutional crisis lies. What happens if Republican state legislatures try to install a GOP president because voting was canceled in defiance of a court order? How could anyone elected through such a process be considered legitimate?

Scenarios like these are exactly why, DeWine explained, we should be worried. There's just too much risk that our typical electoral infrastructure won't cut it in the age of Covid-19.

"We need to ensure that every American that wants to vote in November has the ability to do so," he said. "And we don’t know right now what November is going to look like. Right now, it is very difficult to imagine that Americans are going to line up at the polls in the same, that we’re going to be able to have the same voting machinery that we’re used to."

And think about the fact that senior citizens and retirees — the population that is most vulnerable to the coronavirus — are often staffing polling places. We might find that our polling places are suddenly understaffed in November — and if the virus is still raging at that point, we shouldn't expect these people to tolerate the risk of managing a massive influx of voters.

"There are solutions, which all revolve around early voting, expanding vote by mail, expanding drop off centers and no-excuse absentee ballotting," said Daley. "All of this needs to be done in an effective way, and all of it costs money."

That's why, when Congress was working to pass its coronavirus recovery bill, Democrats wanted to include $2 billion that could fund the states to increase voting by mail. It's not an easy problem to solve. There are many vulnerable areas, including Native American communities, that may need extra assistance to assure that they can cast their ballots. And some states require that votes not be counted until election day itself. These laws will need to be amended and capacity to count mail-in ballots expanded so that we don't have to wait a week after the vote to get the results. If there's a significant gap between election day and the announcement of results, conflict is more likely to arise.

"What happens if Donald Trump comes out and claims victory off of early results in Pennsylvania?" Daley asked.

And this isn't far-fetched. In 2000, disputes about the presidential vote dragged on for weeks, and they were all colored by an initial perception that George W. Bush had been declared the winner in Florida, despite all the irregularities that dogged that election.

In 2018, Daley pointed out, Trump previewed this strategy. The initial counts in the Florida governor and Senate races were particularly close, and Trump pushed the idea that any effort to scrutinize the counts — and thus cast into doubt the putative Republican wins — was tantamount to election stealing.

But Democrats' ask for $2 billion to fortify our elections against coronavirus failed, and the eventual bill only included $400 million for this purpose. Republicans attacked the Democrats' efforts ease voting access as if it was some underhanded strategy to exploit the crisis, rather than a sensible solution to an obvious problem.

"It only makes sense that the two are deeply connected," Daley said, speaking of coronavirus and efforts to ensure voting access. "And one would hope that this wouldn’t be a partisan issue because it’s going to be just as dangerous for seniors in Florida to vote for the president as it is unsafe for urban dwellers to line up down the street at the local school."

Of course, voting rights and access have become partisan issues, with Democrats favoring laws the making casting a ballot easier as Republicans push for more restrictions. Often, each side sees their position as aligned with their partisan advantage, but it may not always be this way. Since older voters skew Republican and also are most vulnerable to coronavirus, the GOP may be undermining its own electoral chances by failing to make it safe for a core constituency to cast ballots.

Daley noted, however, that the divide seems to be stronger among Democratic and Republican officials than among voters. Expanding the franchise to felons in Florida was a broadly popular move, even as GOP officials continue to try to roll it back.

And on Monday morning, Trump made it clear where his head is at on the issue. Speaking to the hosts of "Fox & Friends," he disparaged Democrats' push to make it easier to vote.

He said they wanted "levels of voting, that if you ever agreed to it, you'd never have a Republican elected in this country again."