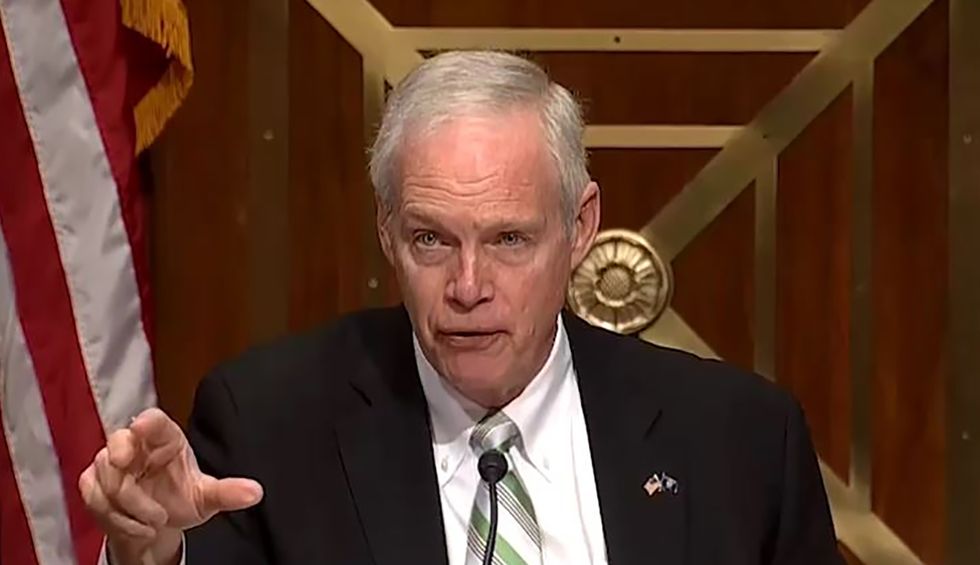 It isn't even the slightest bit surprising that the very moment Democratic presidential contender Joe Biden leapt back into frontrunner status, Republican Sen. Ron Johnson used his post as Senate "Homeland Security" Committee chair to announce that it turns out he will also be reviving the Trump-backed claims against Biden's son Hunter that Rudy Giuliani has been shipping in from disgraced oligarchs with an axe to grind against the new anti-corruption Ukrainian government.

Fortunately, Ron Johnson does nuance the way a bag full of rattlesnakes does nuance, so he was not able to play coy about why, exactly, corrupt Senate Republicans need to rededicate themselves to an anti-Biden conspiracy theory. The Wisconsin senator is doing it because people are voting for Biden, he admits.

Politico reports Johnson's explanation to reporters thusly: “These are questions that Joe Biden has not adequately answered. And if I were a Democrat primary voter, I’d want these questions satisfactorily answered before I cast my final vote.”

If Ron Johnson was a "Democrat" primary voter, we'd have to fumigate the voting booths afterward. More to the point, though, Johnson is quite upfront here. Joe Biden is leading in the polls again. Therefore, Trump's Senate allies, crooked to a non-Romney person, will be investigating Joe Biden.

Donald Trump Jr. arranging a meeting with Russian go-betweens to discuss Russian government-promised "dirt" on Hillary Clinton, paired with a discussion of which specific sanctions against Russia they would like a grateful Trump to lift? Ron Johnson has no problem with that. Trump and his clan funneling federal cash into their own corporate pockets with every golf trip, weekend getaway, and supplicant-booked federal conference? The Way Things Should Be, says Johnson.

Oh, but Trump's likely election opponent's son may have profited off his father's good name, frets Ron Johnson, supposedly. We Republicans must get to the bottom of this travesty.

Johnson is the perfect embodiment of the new Republican party. He is dumb; dishonest; a hack; has evident contempt for democracy in any situation in which he or his allies risk losing any sliver of power; and, as his every act has demonstrated, is willing to be crooked if crookedness will win elections. He a Lindsey Graham with even less shame or charisma, which probably means he, too, will eventually thrust himself upon the nation in a Republican presidential bid.

It is absolutely clear that Republican lawmakers are intent on helping Trump corrupt the next election with conspiracy claims, foreign interference, extorted foreign help, the blocking of election security efforts, the closing of polling places, and outright vote-rigging if they think they can get away with it. This is a fascist movement now. They exist to assert Dear Leader's power; party ideology and the law alike are now whatever Dear Leader claims them to be, and the party's enemies are whoever Dear Leader believes his enemies to be, guilty of whatever supposed crimes Dear Leader claims they are.

From Ron Johnson to Attorney General Bill Barr, they will corrupt every institution as much as is necessary to retain and expand power. There will be no bottom. Ron Johnson, personally, will support much worse.