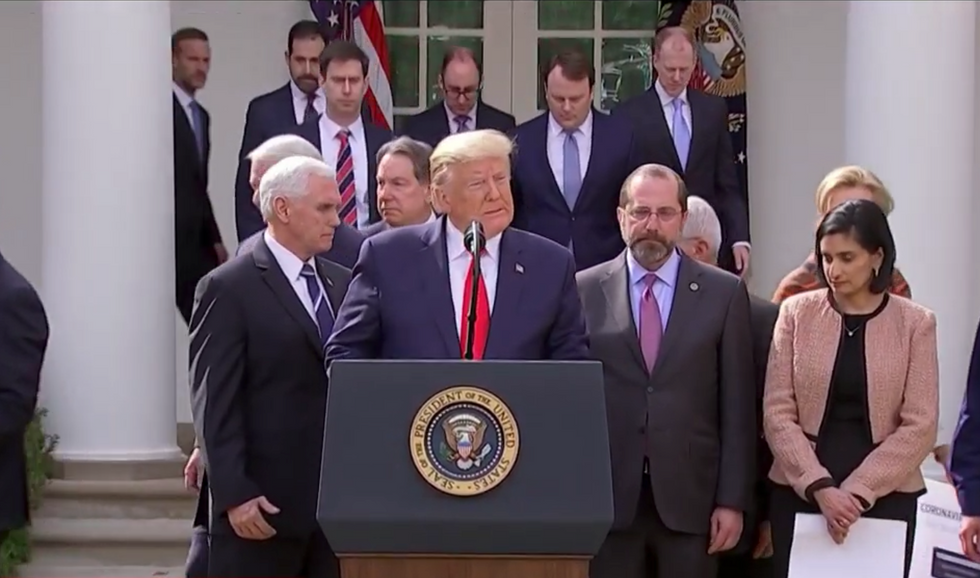 After President Donald Trump unleashed chaos with his Oval Office address about the coronavirus on Wednesday night, it seems he and his team decided they better give it a second shot. So on Friday, Trump appeared in the Rose Garden for a press conference along with business executives and leading members of the coronavirus task force to speak to the country.

And while it wasn't quite as disastrous as Trump's rollout of a new ban on travel to the U.S. from most European countries, the president completely misrepresented the central announcement of the event.

Trump claimed that there will be a new website designed by Google to facilitate the administration of coronavirus tests to the American people.

“I want to thank Google," Trump said. "Google is helping develop a website. It's going to be very quickly done, unlike websites of the past." He said the website will "determine if a test is warranted and to facilitate testing at a nearby convenient location."

This last remark was a clear dig at the Obama administration, which unleashed chaos of its own when the launch of a national website to connect people with Affordable Care Act insurance plans crashed and burned.

But Trump shouldn't have been so cocky.

It turns out, Google isn't designing a website for the Trump administration at all. Instead, Verily, another firm under Google's parent company, Alphabet, has been working on a website, though some Google engineers have apparently volunteered for the project.

This error, though embarrassing, is not that significant. What is significant is that Trump seems to have no idea what the website has been intended to do, when it will be functional, or what it's scope or purpose will be.

So, despite Trump's claim that the website would be "very quickly done," Verily says it's in the "early stages of development." It's not clear at all what this means, but every day counts in a pandemic, and Trump was clearly overpromising. The rollout will only begin in the Bay Area, not for all Americans. And the company only expressed its "hope" that it will be "expanding more broadly over time."

Trump also claimed that 1,700 engineers had worked on the website, but according to the Daily Beast, there was no basis to this claim.

The president's speech indicated that Americans would be able to use the website to enter their symptoms and determine if they needed a test, and if so, where they could get one promptly.

But according to spokesperson Carolyn Wang in a statement to The Verge, the intent of the project was not initially for it to be used for the public but by providers:

Carolyn Wang, communications lead for Verily, told The Verge that the “triage website” was initially only going to be made available to health care workers instead of the general public. Now that it has been announced the way it was, however, anybody will be able to visit it, she said. But the tool will only be able to direct people to “pilot sites” for testing in the Bay Area, though Wang says Verily hopes to expand it beyond California “over time.”