Crisis in chief: The president is spreading disinformation about the coronavirus — and there's no way to stop him 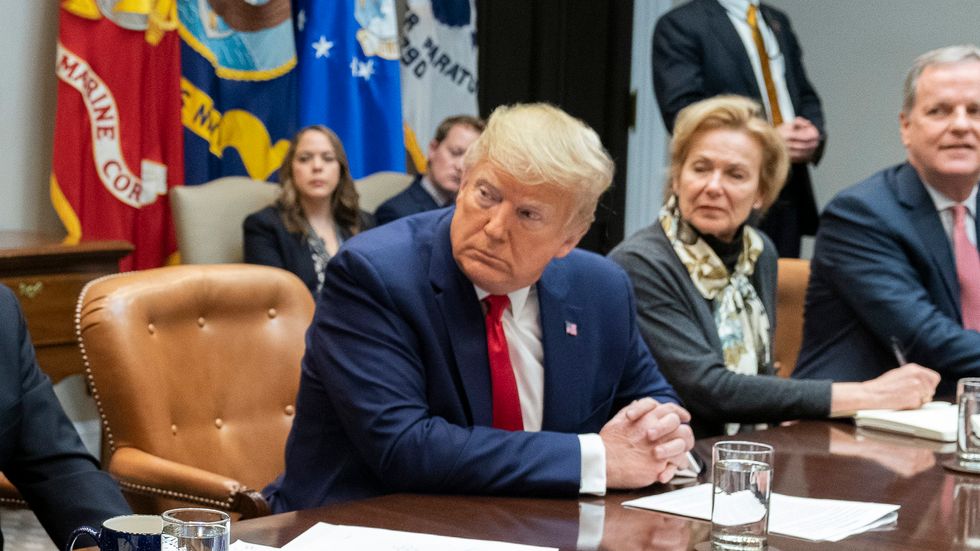 President Donald Trump is actively spreading disinformation about the coronavirus outbreak in the United States, and there's nothing we can do about it.

This is not so. There are undoubtedly more than 129 cases in the United States; the problem is, testing has been so slow — and at times completely botched — that we don't have a good sense of how many cases of coronavirus there are in the country. So Trump is trying to use his own administration's ineptitude as a reason to think the crisis is less severe than it is. And some analysts believe that the actual number of cases is much higher than the number of confirmed cases. The outlet Stat reported on one analysis that looked just at Seattle:

The author of the analysis, a computational biologist named Trevor Bedford, said there are likely already at least 500 to 600 cases of Covid-19 in the greater Seattle area. He urged health authorities and the public to immediately begin adopting non-pharmaceutical interventions — imposing “social distancing” measures, telling the sick to isolate themselves, and limiting attendance at large gatherings.

“Now would be the time to act,” Bedford, who is at the Fred Hutchinson Cancer Research Center in Seattle, told STAT.

As long as a large number of cases are unconfirmed, the virus will be more likely to spread.

All of which makes it obvious that Trump's claim that he closed the borders to reduce the spread of the virus is false. He never did such a thing. The Trump administration did limit entry to the U.S. from non-Americans who had traveled to China, where the virus originated, but this is not "closing the borders." (Closing the borders is a bad idea, anyway.) And when Americans who had been in China and were potentially carrying the virus were repatriated to the United States, U.S. officials were improperly to work with them and lacked the necessary medical protection, according to a whistleblower. These workers may have spread the infection further.

This isn't the first time that Trump has intentionally deceived the American people about the number of cases in the United States. In his first press conference on the crisis, Trump repeated and erroneously referred to "15" Americans who had at that time been found to be infected with the virus; this number was actually a subset of the 60 who had been found to be infected. And he predicted this number would soon go down close to zero, even though none of the administration's health experts were making such a claim.

His effort to downplay and mislead the public about the crisis is particularly disturbing when you consider that Trump said: "We are working very hard to keep these numbers as low as possible!" Taken literally, this suggests that they care more about keeping the reported number of infections down more than they care about keeping the actual number low. Usually, this would be an unfair and uncharitable way to interpret a public official's statement, but Trump long ago lost the benefit of the doubt. As we've seen, he's actively inclined to obscure the truth about the outbreak. And one way in which his administration has been deficient in responding to the virus is in its failure to provide enough test kits and information to the medical professionals on the front lines responding to the crisis. While the actual cause for this delay remains unclear, it's tempting to conclude that the president's active disinterest in the truth about the crisis could be playing some role.

Trump has promoted other dangerous falsehoods about the outbreak:

Many of these claims are actively dangerous. Trump consistently downplays the state of outbreak, and he used the issue to attack the media, which the public will need to rely on for vital information for their own protection. By promoting lies and deceptive spin about the crisis, Trump can encourage dangerous behavior in his supporters and an inadequate response from his administration.

But he remains the president. Democrats tried to remove him for office for a scandal in which he did the same exact thing he's doing now — placing his own short-sighted interests above the needs of the country — but they failed. Republicans refuse to do anything significant to check his behavior. So until at least January 2021, the United States will be stuck with a man leading the federal government who seems to be acting in ways that make a public health threat worse.