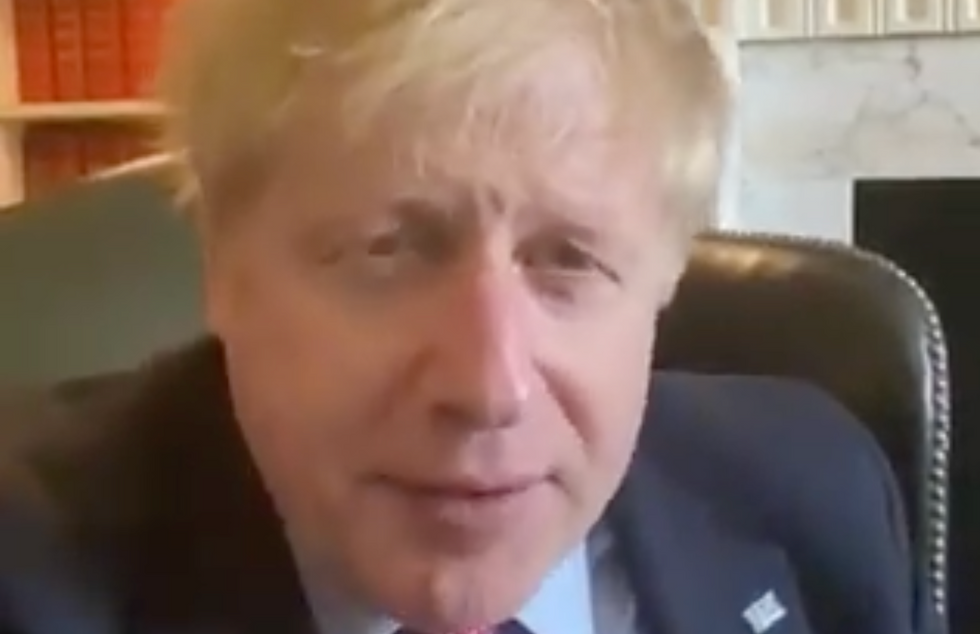 British Prime Minister Boris Johnson announced Friday that he has tested positive for COVID-19, making him the first world leader to do so.

"I've developed mild symptoms of the coronavirus," Johnson revealed Friday in a video posted to Twitter. "That's to say, a temperature and a persistent cough. And on the advice of the chief medical officer, I've taken a test that has come out positive, so I am working from the home. I'm self-isolating, and that's entirely the right thing to do. But be in no doubt that I can continue, thanks to the wizardry of modern technology, to communicate with all my top team, to lead the national fight back against coronavirus."

After thanking those who helped the country through the pandemic, Johnson attempted to reassure the British public.

"We will get through it. And the way we're going to get through it is, of course, by applying the measures that you'll have heard so much about," he added. "And the more effectively we all comply with those measures, the faster our country will come through this epidemic and the faster we'll bounce back."

Johnson took a coronavirus test on the advice of Prof. Chris Whitty, England's chief medical officer, according to a statement provided to the BBC. The prime minister expects to be able to continue to work, albeit remotely, and has selected Foreign Secretary Dominic Raab to stand in for him should he be unable to perform his official duties.

Johnson is the first world leader to test positive for the disease, though Prince Charles was also diagnosed with COVID-19 earlier this week. Prince Charles previously saw Queen Elizabeth II, who is 93, on March 13, raising concerns that she could have been exposed. Matt Hancock, the country's health secretary, also revealed a positive test Friday.

Britain was criticized for its earlier response to the pandemic. The government reportedly considered a plan to accept a wave of infections in order to build up herd immunity so the country would be better capable of responding to the possibility of a second wave of the pandemic, in particular one that would coincide with flu season. The nation began to modify its response last week when it requested that individuals limit social interactions, including "working from home where they can and avoiding pubs, clubs and other venues."

Johnson told the public at the time, "Bit by bit, day by day, by your actions, your restraint and your sacrifice, we are putting this country in a better and stronger position, where we will be able to save literally thousands of lives, of people of all ages, people who don't deserve to die now. People whose lives can, must and will be saved."

The highest-ranking American official to test positive for the coronavirus so far is Sen. Rand Paul, R-Ky., who was diagnosed earlier this week. Several of Paul's colleagues expressed outrage that the optometrist continued to interact with senators and use facilities like the Senate-only gym despite being tested for the virus.

Over the last 24 hours I have developed mild symptoms and tested positive for coronavirus. I am now self-isolating… https://t.co/cMWNOocrLd
— Boris Johnson (@Boris Johnson)1585307728.0