'Beyond parody': Fox News host blasted for saying ‘people are dying’ — but my friends 'can’t get their nails done’ 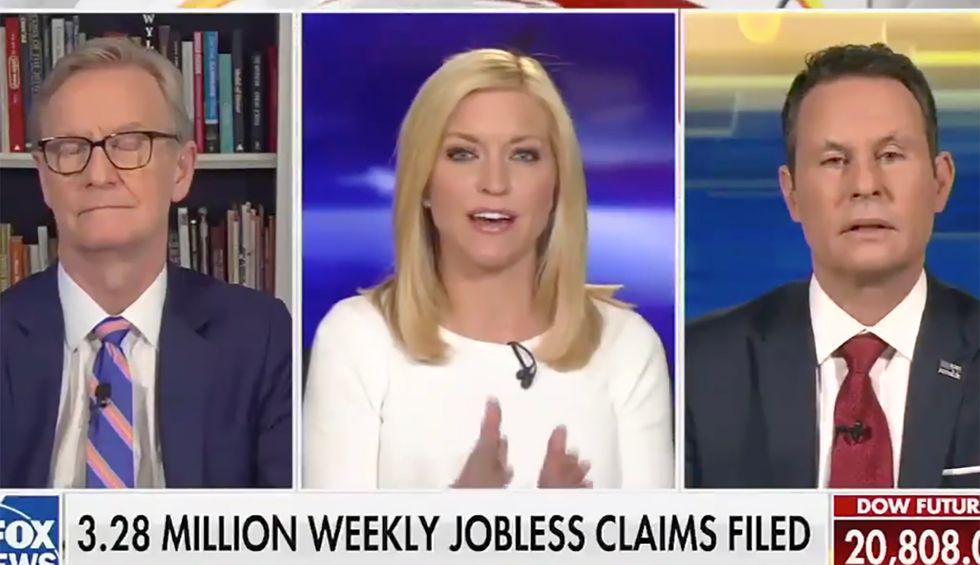 Thursday’s “Fox & Friends” featured insight into how the rich on the right a struggling to deal with the coronavirus pandemic that has killed over 1000 people in the U.S., where there are more than 68,000 confirmed cases. A record 3.3 million people filed for unemployment this past week.

“I live in the city,” Ainsley Earhardt told her co-hosts. “You can’t go back to the city – you can, but I don’t want to, I don’t want to be around the area that’s infected the most,” she said. The New York City region is now the epicenter of the pandemic in the U.S.

“But I’m thinking like all the bills that are stacking up at my apartment. You know, we’ve got to think about that kind of thing. If you bought clothing before all this happened and you want to return it, are stores going to, you know, waive that 30 day period where you can get your money back if you need to return something?”

“These are all the things. Women – y’all don’t think about this, guys, but – this is not a priority, but women have to get their hair done. I saw someone tweet out, ‘You’re gonna see what color our real hair is because our roots are going to grow in.’ Women – all my friends are saying, this is not a priority, people are dying and I realize that – but they can’t get their nails done.”

“You know, businesses are closed everywhere. We’re in priority mode right now. It’s pharmacies and it is grocery stores – those are really the only places that people are going now.”

Remember this the next time you hear that elderly Americans have to be risked to re-start the economy. https://t.co/9OXavyWr0H
— Robert E Kelly (@Robert E Kelly) 1585233845.0

@revrrlewis @JoeMyGod Forget the people who can’t get tested or the doctors/nurses working through exhaustion. Forg… https://t.co/GstWcWdP3h
— James (@James) 1585229265.0

@revrrlewis @KevinMKruse I swear the first qualification for Fox job applicants has to be "Terrible Person."
— Wulfpack08 (@Wulfpack08) 1585229280.0