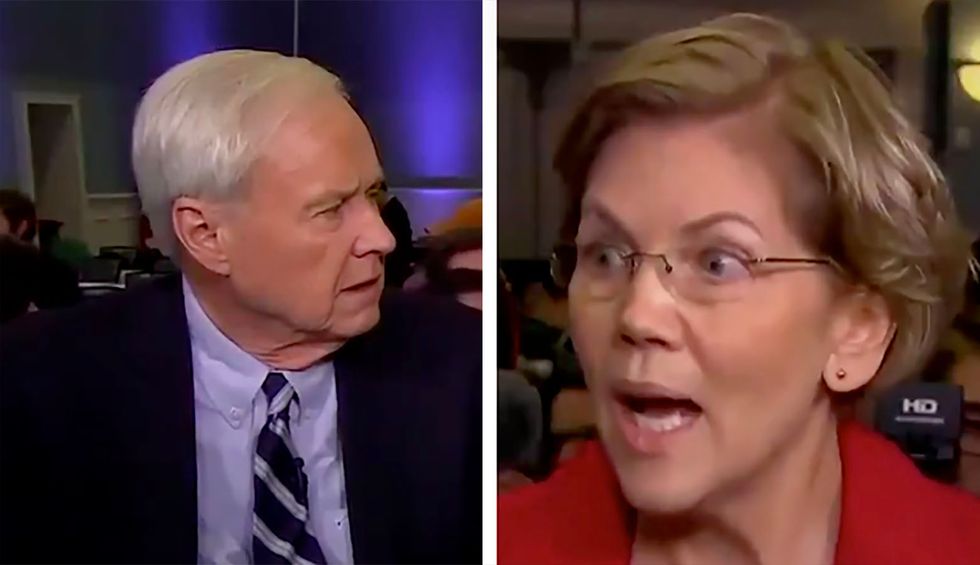 The comments came as Matthews interviewed Sen. Elizabeth Warren after the debate. Warren during the debate launched her second attack on Bloomberg over multiple allegations of harassment and discrimination at his media company and the non-disclosure agreements employees signed as part of legal settlements.

Demanding to know how Warren could be sure the accusations against Bloomberg are true, Matthews offered "a textbook example of why people don't report sexual misconduct," tweeted HuffPost reporter Marina Fang.

Calling Bloomberg the "riskiest" candidate in the Democratic field and one who won't be able to earn voters' "trust," Warren on the debate stage had recounted her own story of facing pregnancy discrimination early in her teaching career.

Although there were no federal laws to protect her, Warren said, "At least I didn't have a boss who said to me, 'Kill it,' the way that Mayor Bloomberg is documented to have said to one of his pregnant employees."

Warren later said Bloomberg's former employee's "own words" were evidence that he had urged the woman to get an abortion. Another former employee, David Zielenziger, told the Washington Post that he had also witnessed the exchange, and said he viewed it as "outrageous" at the time.

Nevertheless, in her post-debate interview with MSNBC, Matthews grilled Warren about the veracity of the claim.

"You believe he's lying?" Matthews asked. "Why would he lie? Because just to protect himself? ... I just want to make sure that you're clear about this."

"We have gone on and on and on where people say, 'Oh, I can't really believe the women.' Really? Why not?" Warren said. "Why would she lie?"

Matthew's "refusal to believe women," as well as his own history of sexual harassment allegations, should be considered grounds for his dismissal, UltraViolet executive director Shaunna Thomas said in a statement.

"MSNBC needs to fire Chris Matthews. Today," said Thomas. "He is not fit to continue to cover this election. MSNBC can and must do better, and they can start by firing Chris Matthews."

Others on social media echoed the call and condemned Matthews for his line of questioning, which, Massachusetts congressional candidate Brianna Wu tweeted, put Warren "under fire, not Bloomberg."

The wildest thing about the Chris Matthews/Warren exchange is Matthews asking why Bloomberg would lie ... about whe… https://t.co/uEhRJNhxIt
— Angus Johnston (@Angus Johnston) 1582693222.0

This line of questions from Chris Matthews is insane. He actually cannot wrap his head around believing women. https://t.co/ZjKazAAK2l
— Lauren Duca (@Lauren Duca) 1582727781.0

Warren reiterated her own experience in her conversation with Matthews, reminding him, "I've been on her end of it... It happens all across the country and men all across this country say, 'Oh my gosh, he would never have said that.'"

"We applaud Senator Warren for standing with survivors of workplace abuse and bringing up these comments at the debate—it is clear that she supports and believes women—something that every Democratic nominee for president can and must do," Thomas said.