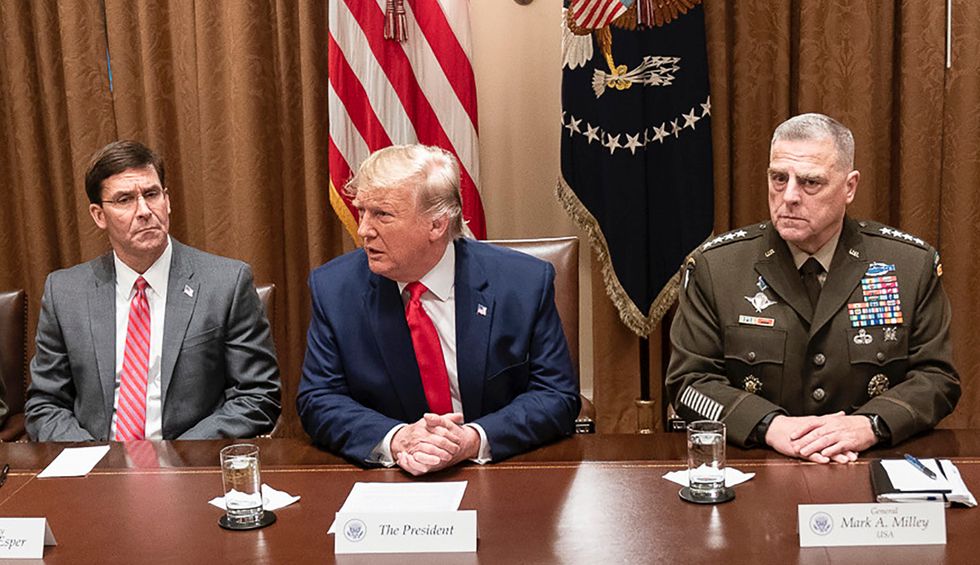 Just two days after vowing the White House "will not be touching your Social Security or Medicare" in its budget proposal for fiscal year 2021, President Donald Trump on Monday is expected to unveil a $4.8 trillion blueprint that includes hundreds of billions in combined cuts to those programs over the next decade, deep reductions in safety-net spending, and a major increase in Pentagon funding.

The president's plan, according to the Wall Street Journal, calls for hiking America's already outlandish military spending to $740.5 billion in FY2021 and pouring $2 billion more into the construction of a wall along the U.S.-Mexico border.

"The White House proposes to cut spending by $4.4 trillion over a decade," the Journal reported Sunday. "Of that, it targets $2 trillion in savings from mandatory spending programs, including $130 billion from changes to Medicare prescription-drug pricing, $292 billion from safety-net cuts—such as work requirements for Medicaid and food stamps—and $70 billion from tightening eligibility access to federal disability benefits."

Many will ignore the #TrumpBudget tomorrow, since they’ve all been so similar they feel like old news. Don’t. T… https://t.co/ORYV9ovIye
— Rebecca Vallas (@Rebecca Vallas)1581287263.0

"The budget reportedly includes destructive changes to Medicaid, SNAP, Social Security, and other assistance programs that help Americans make ends meet—all while extending his tax cuts for millionaires and wealthy corporations," said Yarmuth. "Congress will stand firm against this president's broken promises and his disregard for the human cost of his destructive policies."

On top of the steep safety net cuts, Trump's budget proposal would also slash the Environmental Protection Agency budget by 27%, the Housing and Urban Development budget by 15%, and the Centers for Disease Control and Prevention budget by 9%—even amid the deadly coronavirus outbreak.

Warnings that Trump has Social Security and Medicare in his crosshairs intensified last month when the president told CNBC in an interview at Davos that he is "going to look" at slashing Medicare and Social Security should he win reelection in 2020.

After 2020 Democrats and others seized upon Trump's comments as further evidence that his 2016 campaign vow to protect Social Security and Medicare was a lie, the president has since claimed he is attempting to "save" the programs.

"We will not be touching your Social Security or Medicare in Fiscal 2021 Budget," Trump tweeted Saturday. "Only the Democrats will destroy them by destroying our Country's greatest ever Economy!"

In a statement responding to the reported details of Trump's FY2021 budget, House Speaker Nancy Pelosi (D-Calif.) on Sunday said "once again the president is showing just how little he values the good health, financial security, and well-being of hard-working American families."

"Year after year, President Trump's budgets have sought to inflict devastating cuts to critical lifelines that millions of Americans rely on," said Pelosi. "Less than a week after promising to protect families' healthcare in his State of the Union address, the president is now brazenly inflicting savage multi-billion-dollar cuts to Medicare and Medicaid—at the same time that he is fighting in federal court to destroy protections for people with pre-existing conditions and dismantle every other protection and benefit of the Affordable Care Act."