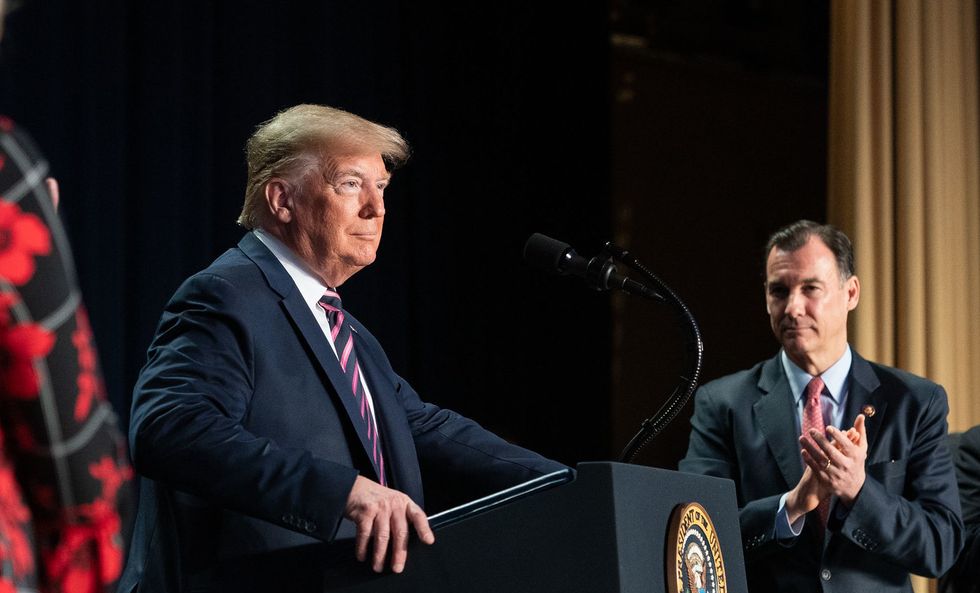 There will come a time when we look back on this week as the moment in our history when we finally understood that we have a man as president who is acting like a fascist dictator. Just look at the headlines from one day's New York Times alone: "Alarm in Capital as Axes Swing in Growing Post-Acquittal Purge," "Justice Dept. Acts to Ease Sentence for a Trump Ally." If either one of those headlines had run on the front page of a major American newspaper before now, not to mention both of them at once, we would have believed as a people, as a citizenry, that we were facing a national crisis. But this week? Wednesday was just another day in Donald Trump's America.

The day before that, in what became known as the "Tuesday night massacre," all four prosecutors in the case against Trump's longtime friend and political bad boy Roger Stone had resigned in protest of the intervention by Trump and his attorney general, William Barr, to reduce the sentence recommended by the Department of Justice in Stone's conviction for lying to congressional committees and tampering with witnesses.

All of this followed closely the "Friday night massacre" of last week, when Trump fired two of the impeachment witnesses against him, Lt. Col. Alexander Vindman of the National Security Council and Gordon Sondland, ambassador to the European Union.

But two "massacres" in a row was just the beginning. By mid-week, Trump was suggesting that Army officials with court-martial authority over Vindman should "take a look at" punishing him for testifying at the impeachment hearing. On Thursday, the New York Times front page trumpeted, "U,S. Lawyers Fear Removal of a Guardrail: Sone Case Stirs Worry of What's to Come." And by Friday morning, a panel of legal pundits on MSNBC were worrying about what would happen when Trump didn't merely step in to help allies like Stone but actually began prosecuting his political foes.

Folks, let's not mince words: This is the kind of stuff we read about happening in dictatorships like Russia and North Korea and Iran. And yes, it's the kind of rule by strong-arm fiat that was practiced by Adolf Hitler in Nazi Germany.

Before this week, I would have thought it an exaggeration to compare Trump's frequent rallies to the infamous Nuremberg rallies Hitler held during the1930s. No longer. Trump's rallies are unnervingly close to those held in Nuremberg. The MAGA hat has become a kind of Trumpian Nazi  helmet. The denunciations of hated minorities are the same. As is his insane bellowing before a crowd screaming its slavish obeisance.

Let's just stop for a moment and consider the angry chants of "Lock her up," first directed at Hillary Clinton, now at Nancy Pelosi. What do Trump's cheering crowds want his Democratic opponents locked up for? Neither of those women has faced criminal charges, much less been convicted of any crime. Neither is even under investigation for corruption or alleged criminal behavior. But that doesn't matter to Trump and his rally crowds. This stuff has been going on for so long, it's clear that they actually do want them locked up. When Trump stands before his screaming fans, raising his arms and smiling, it's obvious he does, too. To call for the imprisonment of political opponents without trial is not playing with rhetoric for effect. It's not political gimmickry. It's not cute. It's not funny. It's not clever. Let's say out loud what it is: It's pure fascism, plain and simple.

The man who stands before those rallies and encourages such idolatry isn't merely running for president. He is calling, directly and without apology, for the kind of obedience and loyalty demanded by dictators. He is commanding worship and submission. It must be why he attracts so completely the support of evangelical Christians. He truly is the false idol their Bible warned them against. They have fallen for him in the same way the most conspicuously devout worshipers commit sins. The inevitability of Trump and his evangelical masses is jaw-dropping, and yes, biblical.

By the end of the week, we had the practically comic spectacle of Attorney General Barr scolding Trump publicly for his tweets in an interview with ABC News, saying they "make it impossible for me to do my job." Within hours, Trump replied — by tweet, naturally enough — that he has the "legal right" to tell Barr what to do in a criminal case, "but I have so far chosen not to!"

Which given the events of the rest of the week is a little bit like reassuring the "Lock her up" minions at his rallies, "Just wait."

It's hard to put a finger on the worst thing Trump has done since taking office, but right up there is the complete destruction of the idea that the person in the Oval Office is the president of all the people. He isn't. He doesn't want to be. If you didn't vote for him, if you're not out there wearing a MAGA hat and screaming at his rallies, you're a non-person. If your state didn't go for him in the 2016 election, forget about it. Just ask California, or Puerto Rico, still waiting for federal assistance after natural disasters. Or ask New York, which Trump is now extorting like a domestic Ukraine, by denying New Yorkers access to the "Trusted Traveler" program unless the state "stop all of its unnecessary lawsuits & harrassment" [sic].

To divide the country into those Trump approves of and those he does not is inherently fascistic. That way lies the singling out of non-supporters and minorities for special treatment. With anti-abortion laws being contemplated around the country — almost entirely in red states that supported Trump — that would actually "lock up" women who get abortions, the day when we can sit back and review Trump's "latest outrage" calmly is over.

Donald Trump is an existential threat to the virtues of the democracy we have enjoyed for more than two centuries. He is a real threat to the things we have thought we shared as Americans: the love of variety and dissent, and a belief in the consent of the governed. The capacity of all citizens to respect each other's opposing positions, even amid vigorous disagreement. A respect for the disadvantaged and a scorn for the absolutism of the strong. A universal contempt for the public lie. Trump stands in outright opposition to all of this, and he is a threat to us all.

The feeling in the air by the end of the week was one of powerlessness. How could it not be, having watched Trump take a blowtorch to the Department of Justice and the rule of law, firing his enemies, rewarding his friends, making a mockery of the Constitution and everything it stands for?

I remember the last time the feeling of powerlessness was this strong. It was back in 1969, with Richard Nixon in the White House. On the day he took office, 34,000 young Americans had been killed in the war in Vietnam. By that fall, another 9,000 had died. It seemed as if everyone opposed that war, even those in the military being made to fight it. Nixon was bombing North Vietnam, Cambodia and Laos. The war had become a massive trench filled with blood and bodies. Nothing anyone did could stop it.

The answer came on Oct. 15, 1969, with the Moratorium to End the War in Vietnam. It was organized the old fashioned way, by word-of-mouth in bars and college dorms and offices and on the phone. The result was millions marching in the United States and around the world, with a quarter of a million people marching on the White House in protest. Two weeks later, Nixon gave his famous "silent majority" speech, widely seen as an answer to the Moratorium. But two weeks after that, Seymour Hersh exposed the My Lai massacre, and three days later, on Nov. 15, another Moratorium March took place in Washington, with half a million marching against the war. A quarter million marched in San Francisco. Hundreds of thousands marched elsewhere. Nixon was forced into the Paris Peace Accords. By August 1973, the Congress passed the Case-Church Amendment, ending direct U.S. military involvement in the war.

We're there again. It's time for another Moratorium march, this time against Donald Trump. It's not enough to vote against him in November. We're sliding into a fascist dictatorship. The time to act is now.